** post delayed while waiting for the missus to do  photo shoot!**

I haven’t been feeling up to much all week really, but finally had a mammoth cutting out session on Sunday afternoon.  I got cracking on bank holiday Monday, and decided to tackle the ‘non white’ sewing first, as I hate threading and re threading the machines. Three successes in next to no time.

#1:  Liberty cotton [?] from the Rag Market.  It looks like Tana lawn, handles like Tana lawn…but no matter my googling, I can’t identify the print. Can you help?  Maybe it isn’t Liberty after all? Anyway, it sewed up like  a dream.

I  increased the scant 1/4″ seam allowances this time so that I could do french seams, handsewed the narrow hem, cuff turnbacks and collar band finish. I used almost the last of my silk organza as interfacing- this gives the collar the right amount of body without bulk.

I like this pattern a lot, it goes together very smoothly, and I’ll be using this method of collar attachment in future shirts:  it seems at first to be too short for the neckedge, but some ease stitching and clipping results in a beautiful collar stand.  You sew it on from the wrong side, and do the folding under/hand stitching on the right side.  This of course leaves the inside beautifully neat when the collar is worn open, and any hand stitches are hidden by the collar itself.

I’ve NEVER seen this advised on any pattern I’ve ever used before.  Weird, but you live and learn! Popper fastenings again, and although there are no cuffs, the wife asked for poppers on the wrist edge to imitate the effect.

The inside neck band, and under collar are in navy poplin, just for a nice contrast.

Wifey LOVES it- we both think it’s going to be worn with jeans a lot. 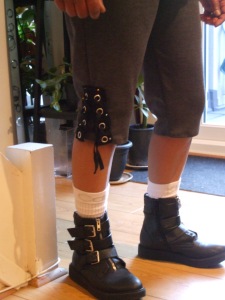 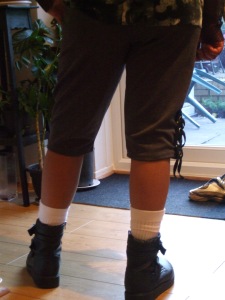 #2: Short grey marl leggings- short because there wasn’t much fabric!  Pattern is the DK V1440 again, body length shortened as the wife keeps rolling the waistband of the others over, and that annoys me!  Cute little summer alternatives to shorts. We added a little lacing detail on one leg, which I’d salvaged from an old punky T shirt which is waaaayyyyy too small now.  Apparently this outfit will be perfect for the studio come summer time.

#3: ‘Angora touch’ jersey from The Textile Centre.  This has a green flame effect panel print.  It felt so wool-like that I did a burn test, and it definitely contains wool [that smell!]  It’s a lovely fabric.  Oddly, the flame print runs across the stretch, which I wasn’t expecting, so I placed it with ‘flames’ at the hem edge and across the bum/crotch.  I think it looks cute.  The pattern is the famous Style Arc ‘Linda’, which I’ve had for ages and used loads of times for me.  I shortened the body length a tad again, but otherwise it’s a straight up size 14. And there you go.  Not bad for an afternoon’s sewing.  [And an evening, but there you go!] 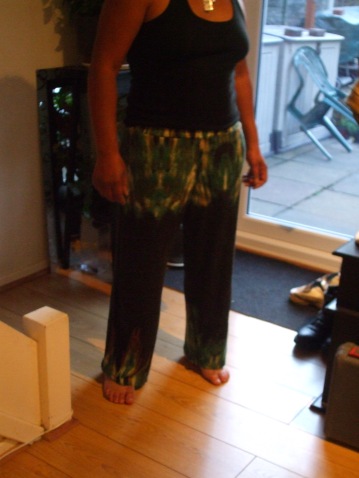 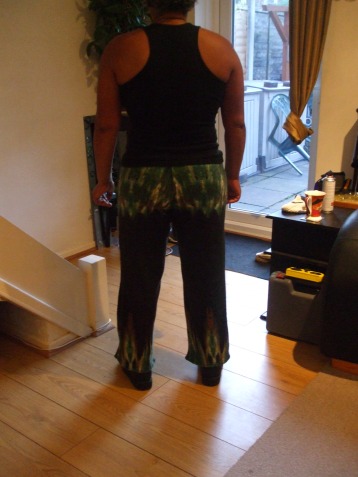 Another big shout for The Textile Centre by the way.  I dropped them a line the other day, praising their fabrics and their service, and also telling them that quite a few of you were going to take a look.  I got  a lovely reply: