The Belle Époque or La Belle Époque (French pronunciation: [bɛlepɔk]; French for “Beautiful Era”) was a period of Western European history. It is conventionally dated from the end of the Franco-Prussian War in 1871 to the outbreak of World War I in around 1914. [Wikipedia]

Well that’s one helluva time period!  It covers styles as varied as these

Burda 7029 ,described as a belle epoque dress.  It’s closest in inspiration to the latter styles, often described as ‘Titanic era’

The dress fastens with a zip at the back, but also has lots of little buttons.  I plan to make elastic button loops to fasten over the zip, as I did with my daughter’s wedding dress.  Style and convenience!

I couldn’t decide on colour, but the missus prevailed on me to stick with grey as per the illustration.  I didn’t want it to look funereal though, and realised that the dusty pink lawn which I bought cheap for lining purposes, actually looks lovely with the piece of suiting that’s been in stash for a very long time.

The main fabric is a grey suiting, almost certainly manmade, and [I think] Teflon coated.  It originally came from a company that the wife worked for years ago, which supplied corporate clothing.  They bought in most of their stuff, but had to make special orders for some companies, and kept a stock of high quality fabric.  The owner gave this to Dawn years ago, and it’s simply been stored.  It frays a lot, but doesn’t crease [might be pressing issues, we shall see] 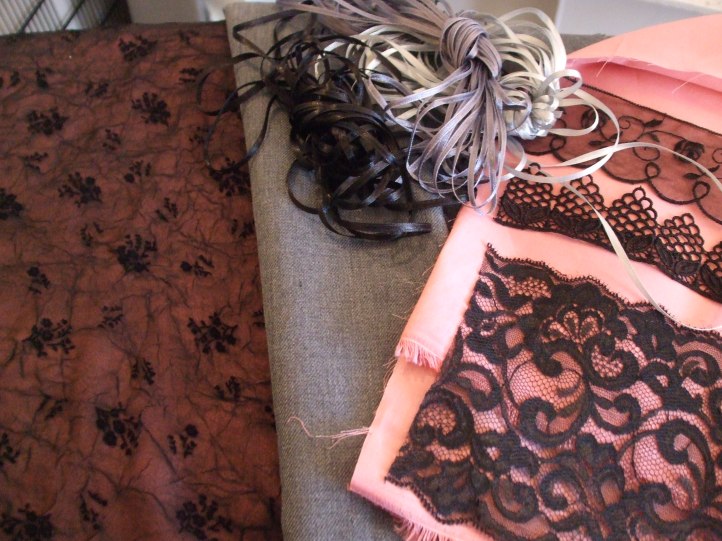 The rose pink lawn is lovely quality, despite being so cheap, and is about the only shade of pink I could ever be persuaded to wear.  I didn’t want it to look as if I’d dropped sheets of bubblegum down the dress though, and to my delight, I discovered that a very small remnant of fine black gauze, figured with tiny flock flowers, tones the pink down beautifully.

The lapels are single layer in the pattern, and just appliqued on, but I’ll make them properly, using  a scrap of grey taffeta from stash as backing, and flat-piping the edge with the pink binding before adding the ribbon detailing.

If you recall, I picked up this remnant when shopping at Barry’s.  It was on the bargain table, and there was only about 1.5m there.  When they told me how much it SHOULD have been [it wasn’t meant to be on the bargain table] I said I didn’t want it.  After a short while, the saleswoman decided to let me have it, as I clearly wasn’t trying to pull a fast one!

I’m teaming it with beautiful lace which I bought a couple of months back from Mokshatrim on eBay, and some bargain ribbons, also an eBay find.  The pink lawn will also be used for piping, not in the original pattern instructions.  Sleeves in pink with gauze overlay, and the asymmetric skirt overlay also in pink with lace appliqued.

The buttonholes on front and back skirt, and on the lapels, are fake, just pieces of ribbon applied to look like welt buttonholes.  I’ll use covered buttons there.

Lots to do!  I was wide awake at 3am today, so I made a start on marking darts, and pinning the first few bits together.