Between fittings:  I cut out the skirt, did some more maths to calculate the size of the godets, pondered on the best way to insert them, and got cracking.  I’d done some eBaying, and found a gorgeous vintage petersham in turquoise, some turquoise cord [more on that later] and a few other doo-dads.  I wanted to make the whole skirt with French seams, hence the pondering on how to negotiate the points of the godets. 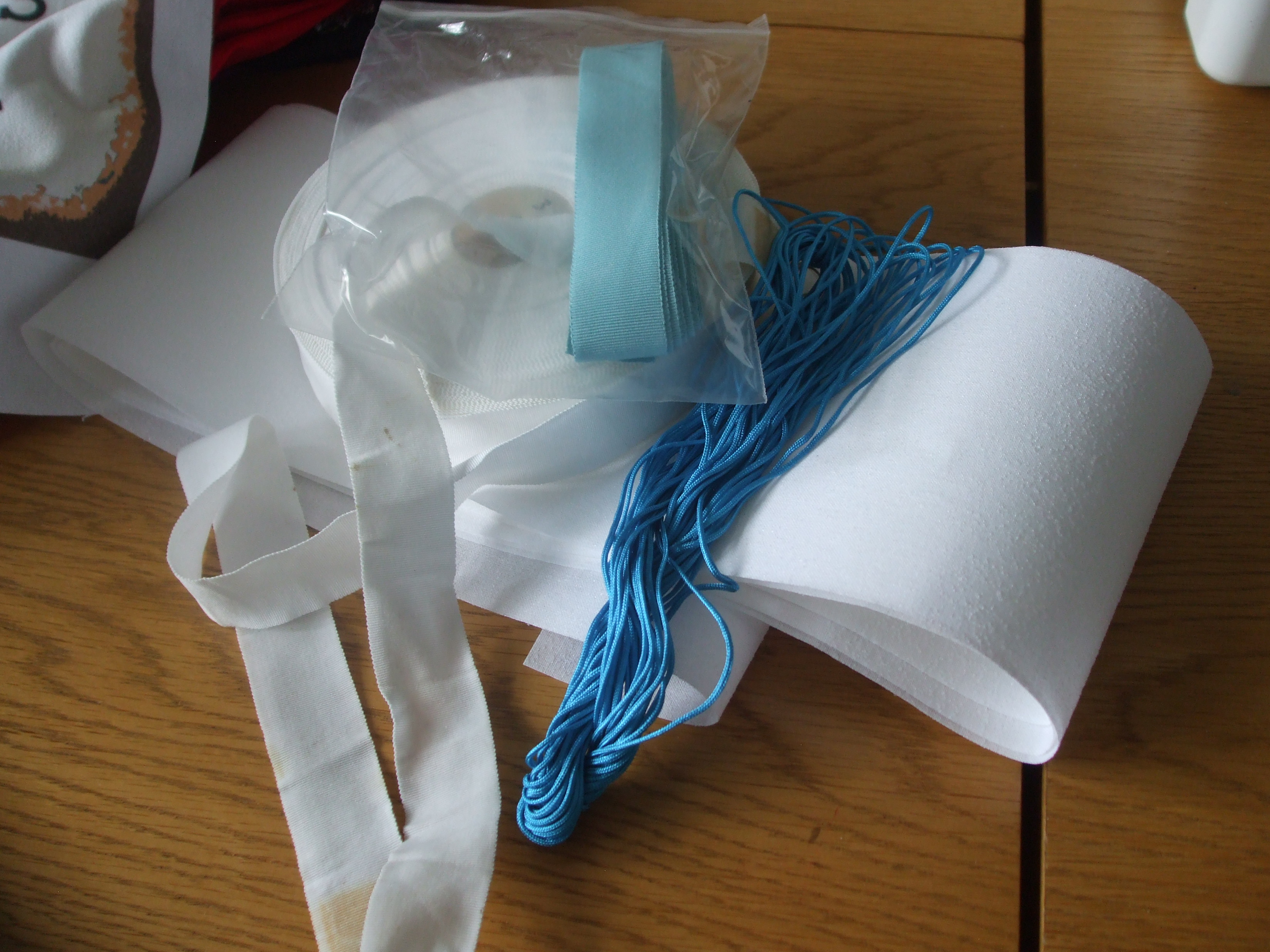 I cut it out, and also the pink shell top, with extra wide seam allowances, and using pinking shears  in case the lamé didn’t behave itself and started fraying a lot.  As it happened, it was fine, although it did blunt my sewing needles quite quickly!

I put the skirt together, but didn’t add the waistband until it was fitted.  This was a good thing, as Jackie had been watching her diet and working out, and lost several inches between fittings!

I then treated the panel+godet as a single piece, and seamed the skirt panels together, keeping an eye on the crossover where the top of the godet came to a point.  The first one needed a tiny bit of fudging and hand sewing to tidy it, after that they went beautifully.   I swear I took pictures of this, but can’t find any.  Not to worry!

I put in one godet at each front princess seam, one at centre back, and one at the back princess seams.  I didn’t put them at the side seams, because my aim was to keep the skirt looking pretty A line until she moved, when it would all flare out.  This worked really well, to my delight. 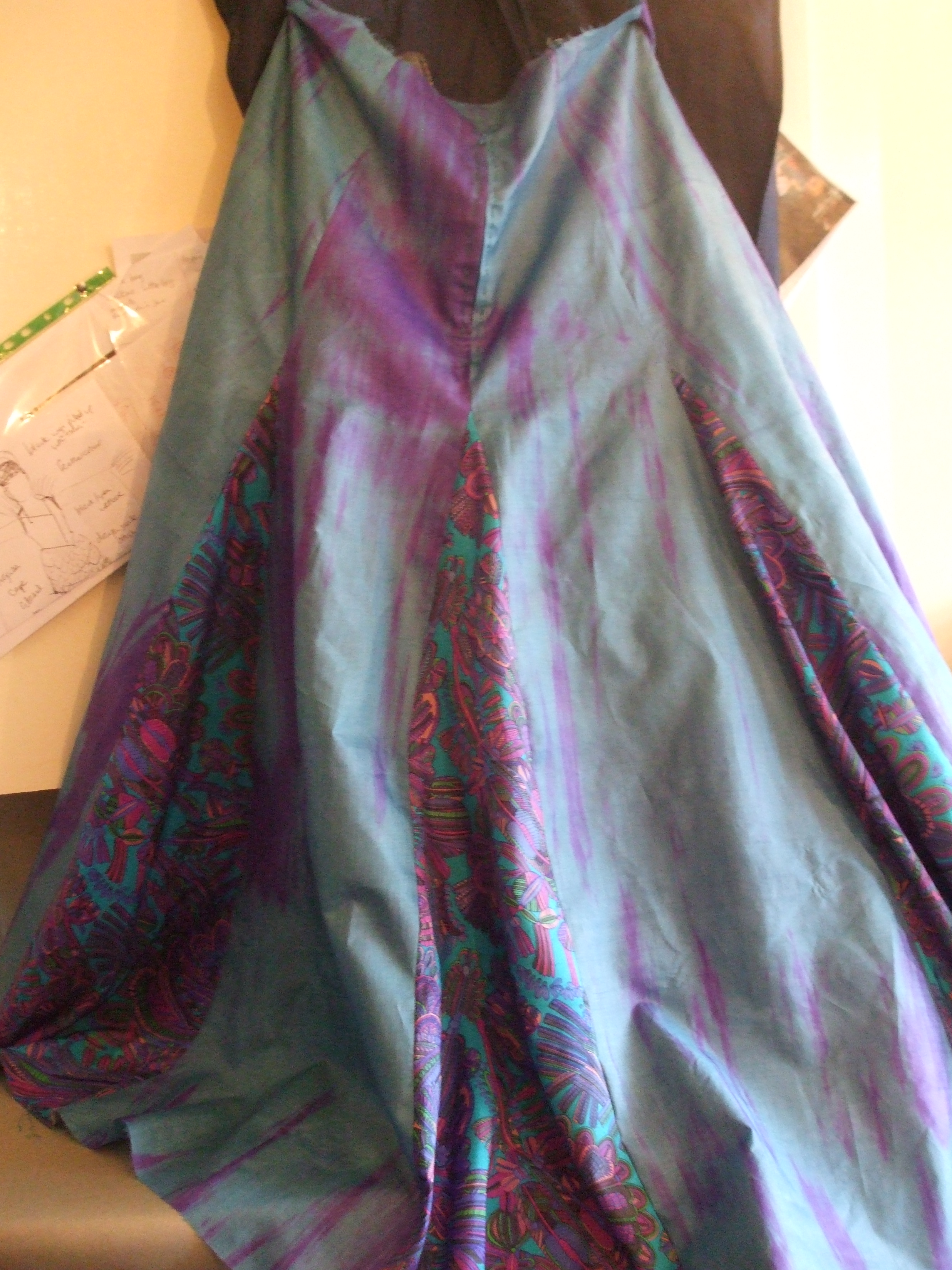 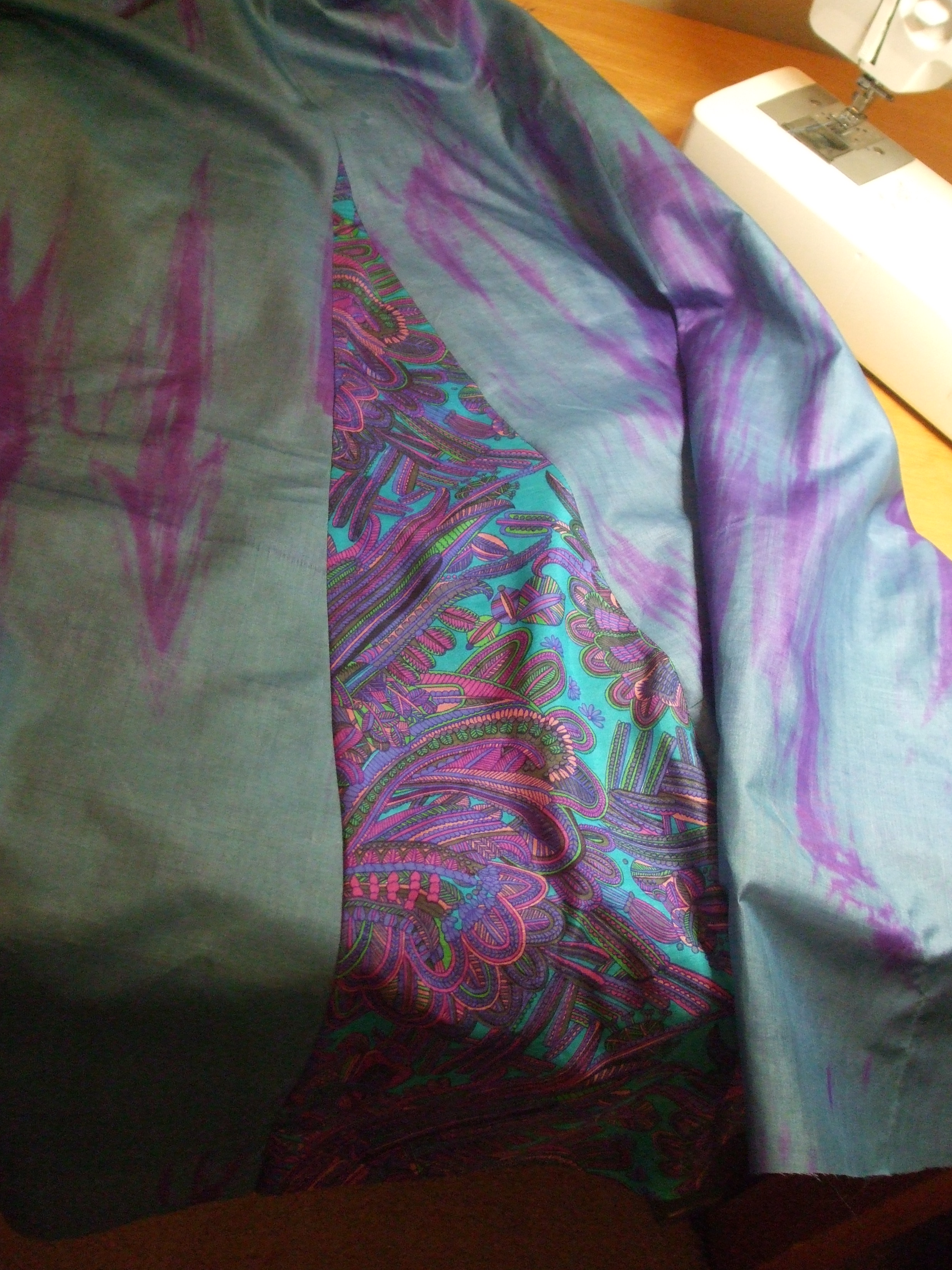 I basted a zip into the CB seam, and put the skirt aside.

The top was to be lined, so I sewed it up a tiny bit bigger than the toile, to allow for the lining.  I basted a zip into the side seam, ‘upside down’ so that it fastened by pulling towards the waist.  Then I asked Jackie back for the next run. 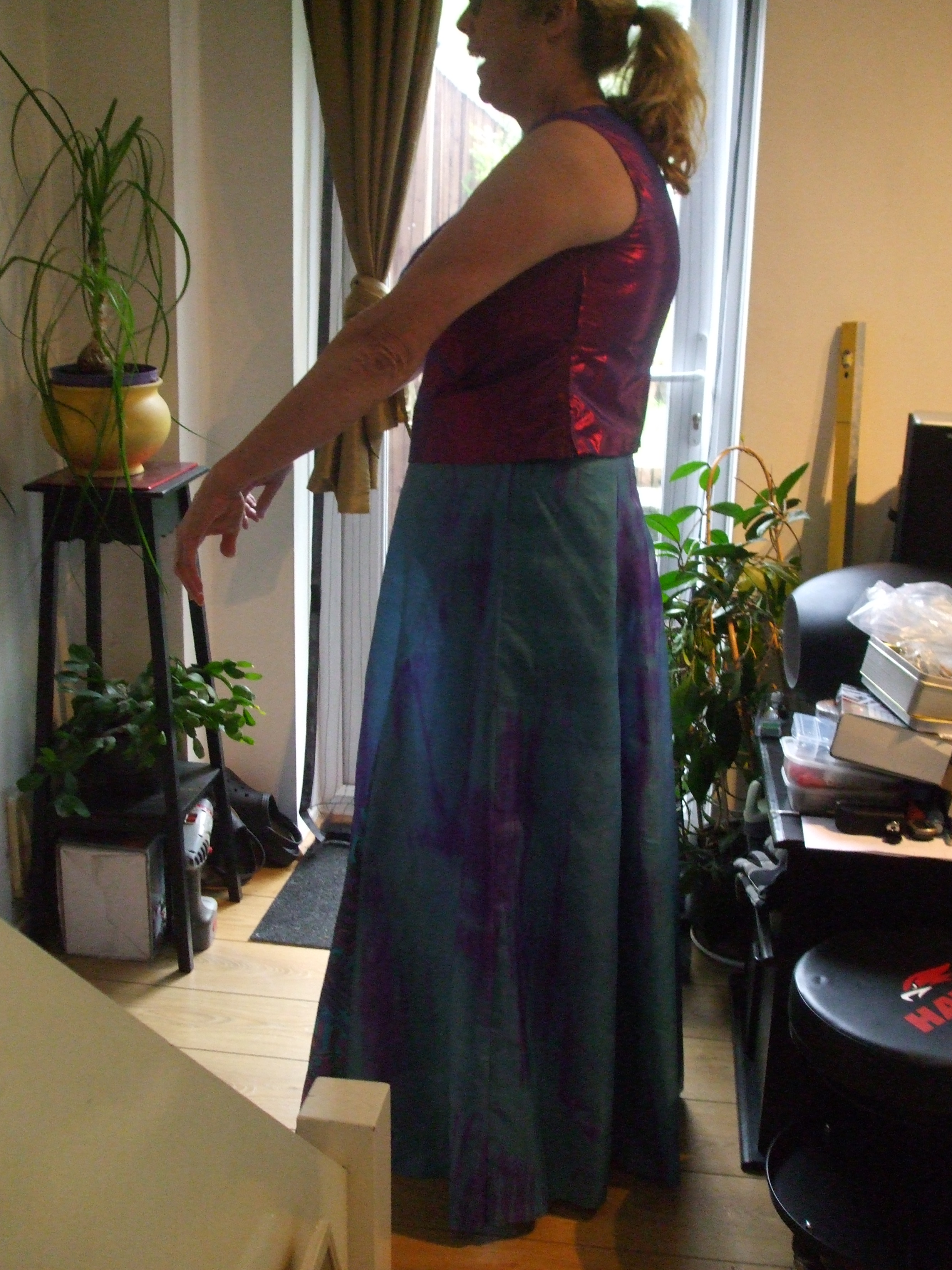 The fitting:  the skirt was met with much cooing and happy smiles [much of them from me, it really is a lovely thing] and just needed taking in at the waist.  I decided NOT to unpick the French seams on such a fine fabric, so just took a second pass at the back princess seams, tapering the adjustment back in at hip level.  This worked well, and it was ready for the waist facing. 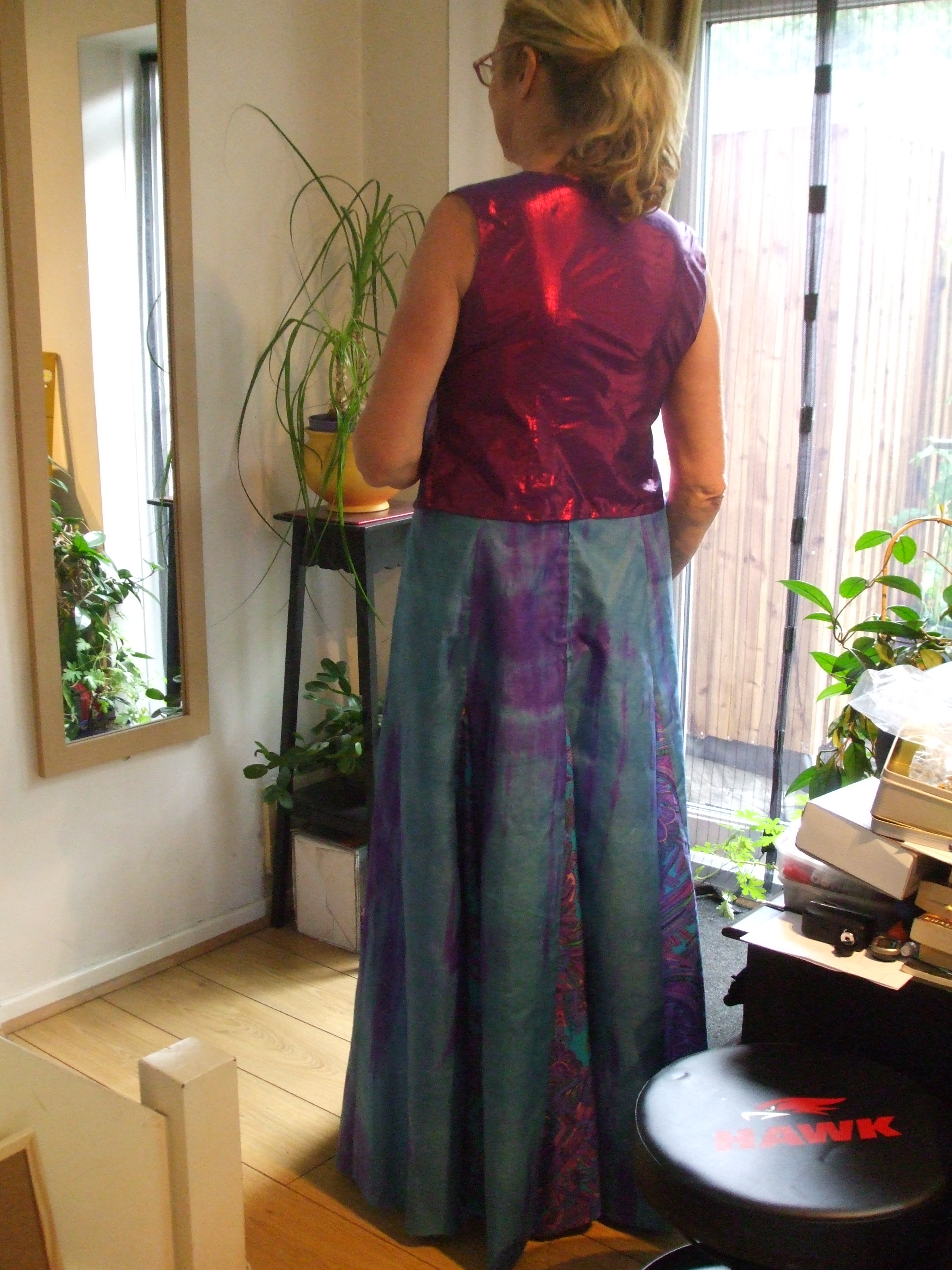 The top took a little more finessing, but nothing major.  I let out the back darts, slightly altered the armhole shape, then put the darts back in again!  A tweak here and there, and all was good.  Jackie asked for the side seams to be opened a little to make little vents, and we discussed this as an option, reserving judgement until the final steps, as it’s easy to add in.  I wondered if it might make for unwanted midriff exposure, Jax decided to wait and see.

Then we played with shapes for the coat.  I’d done a lot of thinking, and digging through my pattern stash, but hadn’t hit pay dirt, so I just draped the various fabric options onto Jackie over the top and skirt, so she could see what my thoughts were.  I loved doing this, it was like all my childhood dreams of being a window dresser! 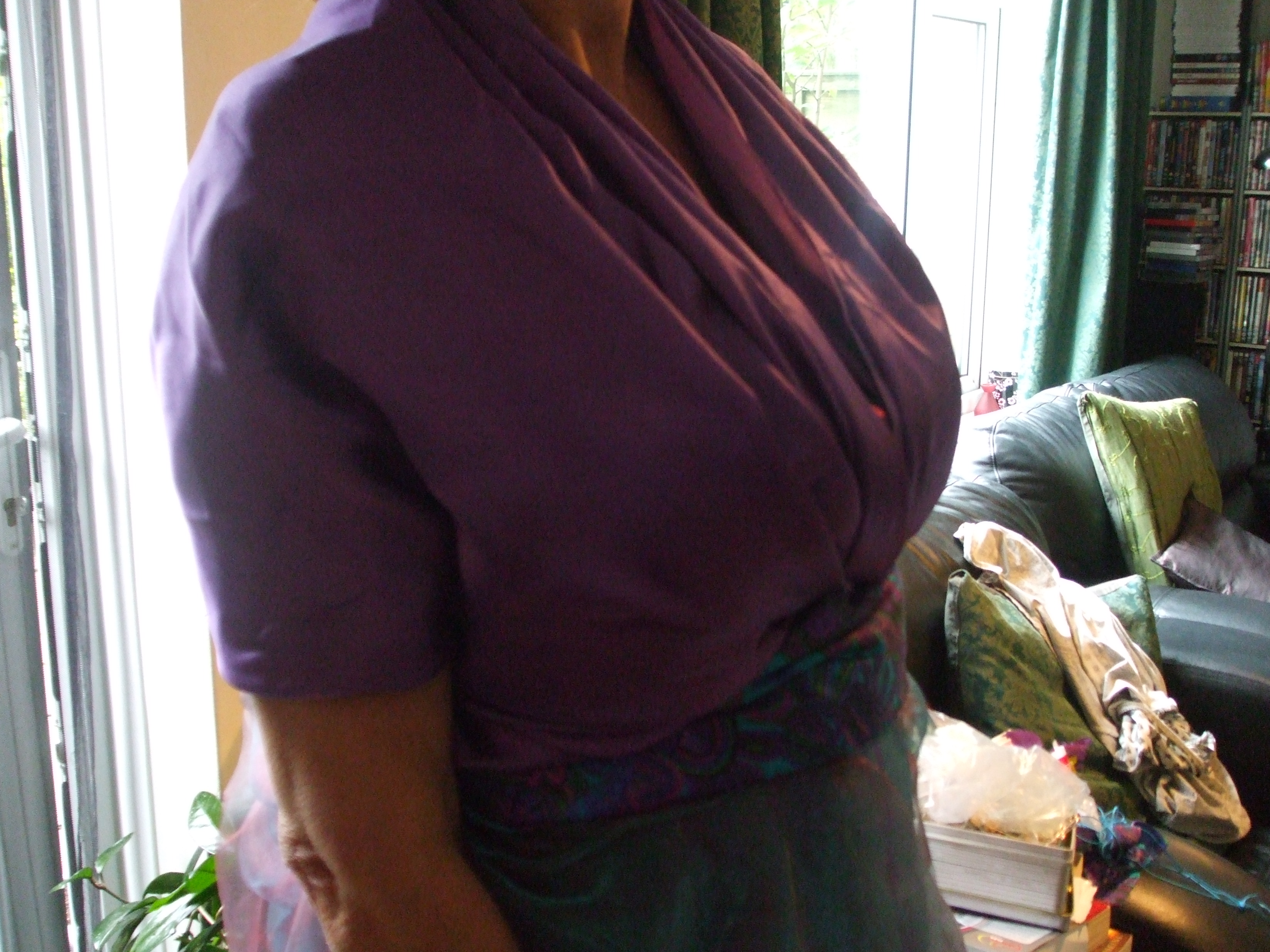 Jackie liked the rough idea, and said she was happy for me to go for it.  I’m not sure if she actually was 100% at that stage, but she made a good show of it!  So I got the toile fabric, and made a rough draft of what was needed, the main issue being the shaping on the waistband.

And that was that, much shorter than the first fitting, all set for MUCH hand sewing, lining and faffing.  Off went Jackie, and I headed back to the work room.