What a day that was!  We were supposed to be going to a certain much-awaited wedding on Saturday, but as we started to get ready to go out, Dawn came down with a horrible upset tum, and had to go back to bed for the day.  I cursed a fair bit [not at her, just about not making it to the wedding] and then used the time to best advantage, and sewed.

Dawn re-surfaced a bit after 3pm, and commenced to test her appetite.  I have to say, it passed with flying colours…

I was close to finishing by the time we’d got ourselves sorted out, so ploughed on with the final hemming stages, and got it completed in good time to doll up and go join the wedding for a few hours of the evening do.  More on the wedding in other posts, back to the jacket for now.

I think it has fulfilled my aim of being a very versatile jacket, styled to look dressy if needed, but still fine for wearing as a casual cardigan style cover up too.

The top-stitching was a beast.  A BEAST.  Nearly 5 reels of ruddy thread, and what felt like  a lifetime of sewing [fairly] straight lines.  Not very straight at all actually.  I like the texture it adds, even if to all intents it just looks pinstriped.  I will make at least one more of these- although it’s a distinctive style, the choice of fabric will radically change other versions.  I may actually lightly quilt a further version, if the fabric is thin enough, but will do random wavy lines instead of all this palaver!

It fits neatly, edge to edge, although on reflection I probably should have made it a size bigger.  I see no way of doing  a sensible FBA, so I’m not sure how else to make it a tad larger…

The hemming instructions appear to leave the entire hem loose, but it isn’t long enough to my eye, and there’s an unsightly gap between lining and coat hem that shows the seams.  I’m not impressed with that.  It also means that I should have neatened the lining seams, and they will fray like mad, so I may need to get inside and do some more hand stitching.  The lining is also smaller than the outside- maybe to encourage the drape of the outside? 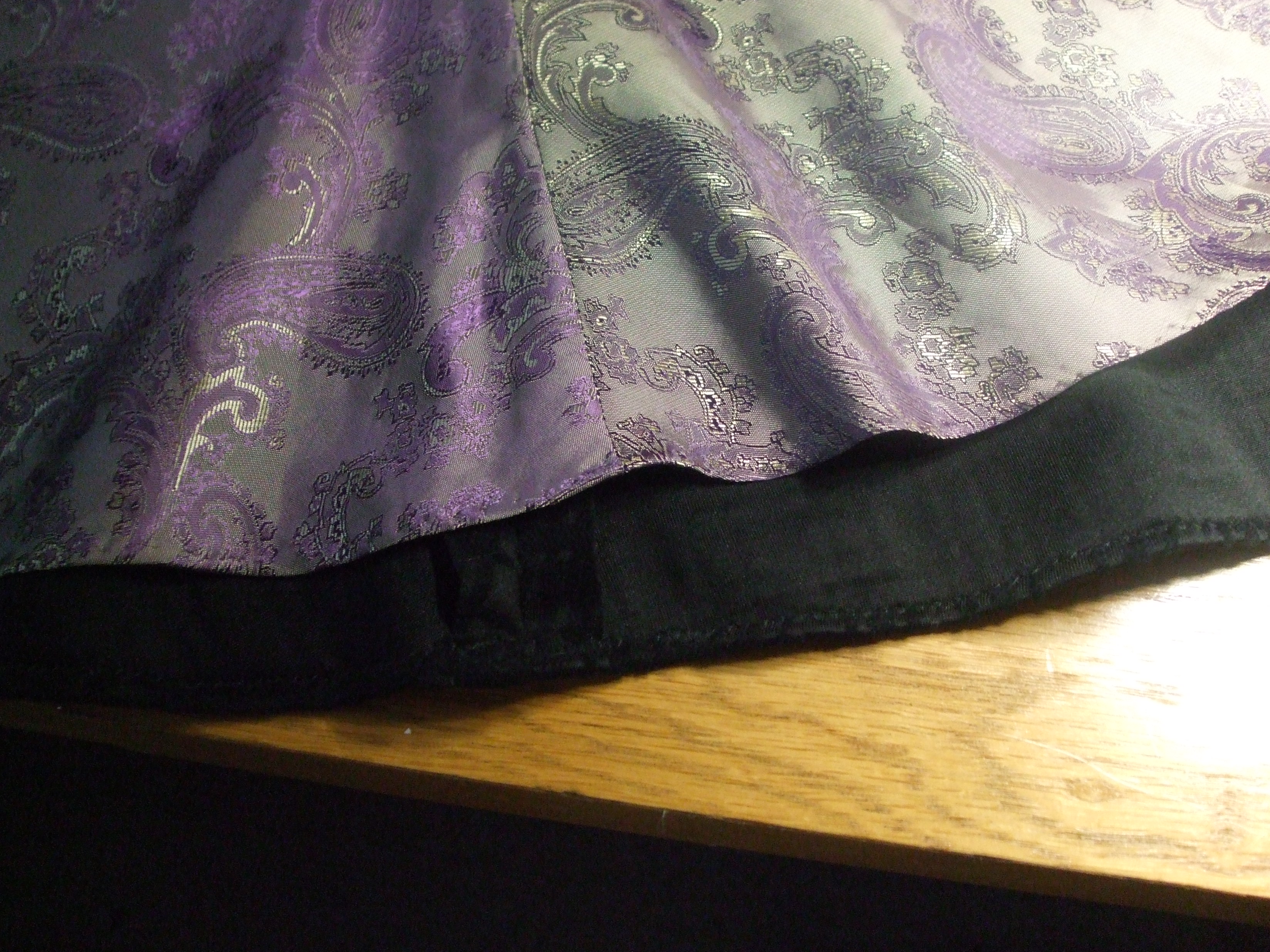 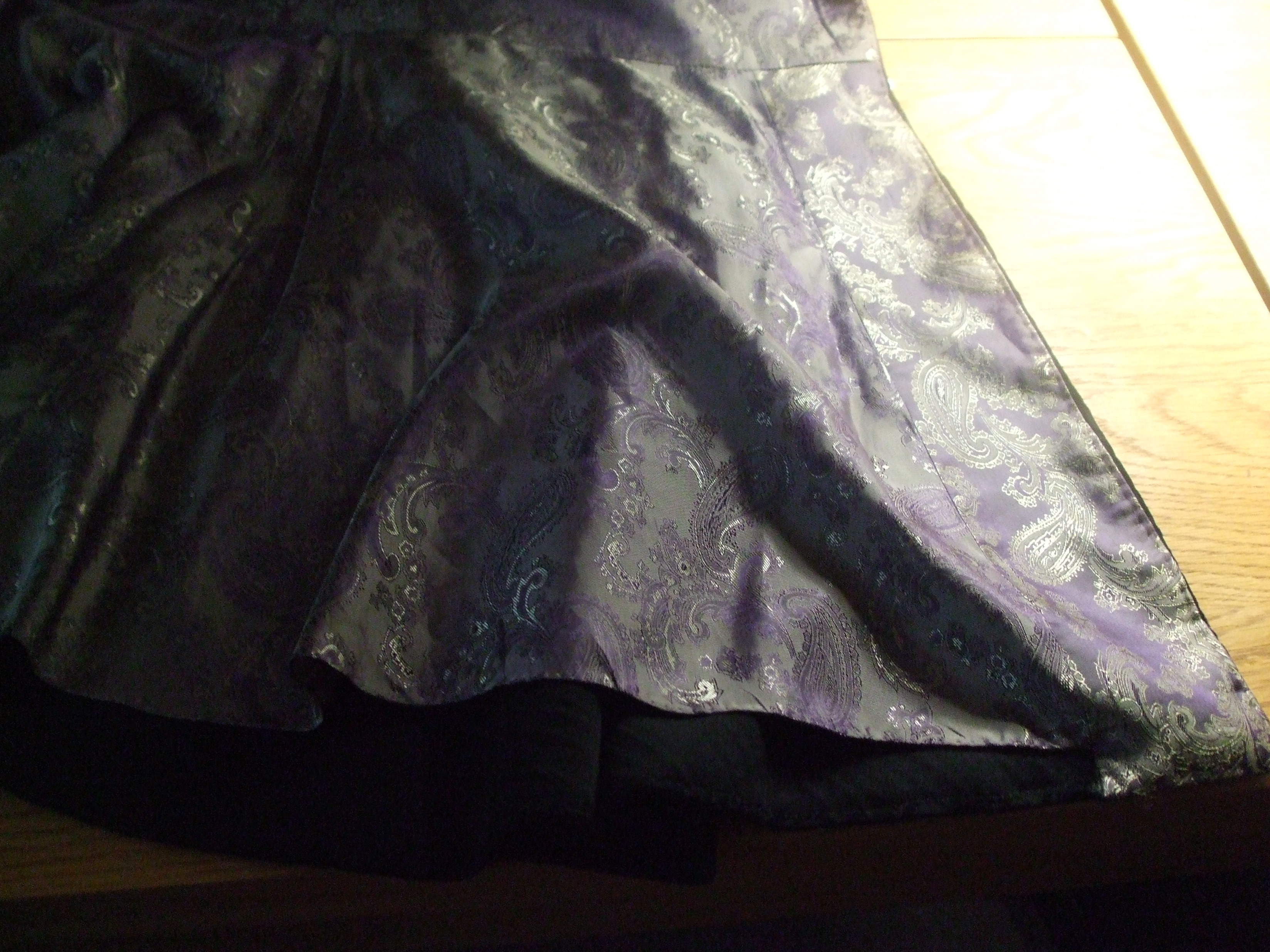 On that note, I did all the under stitching by hand, a detail I got from the wonderful Kate of ‘Fabrickated‘, and now add to many of my ‘posher’ projects.  Not all of them, life’s too short!  I also did the second row of stitching on the tiny rolled hem of the lining by hand.  The fabric was too shifty to even try putting it through the machine again.  The similar hem on the chunky ponte ‘skirt’ was a pain, so I did a narrow zigzag as the second pass.  My brand new duck-bill scissors were invaluable for these steps. 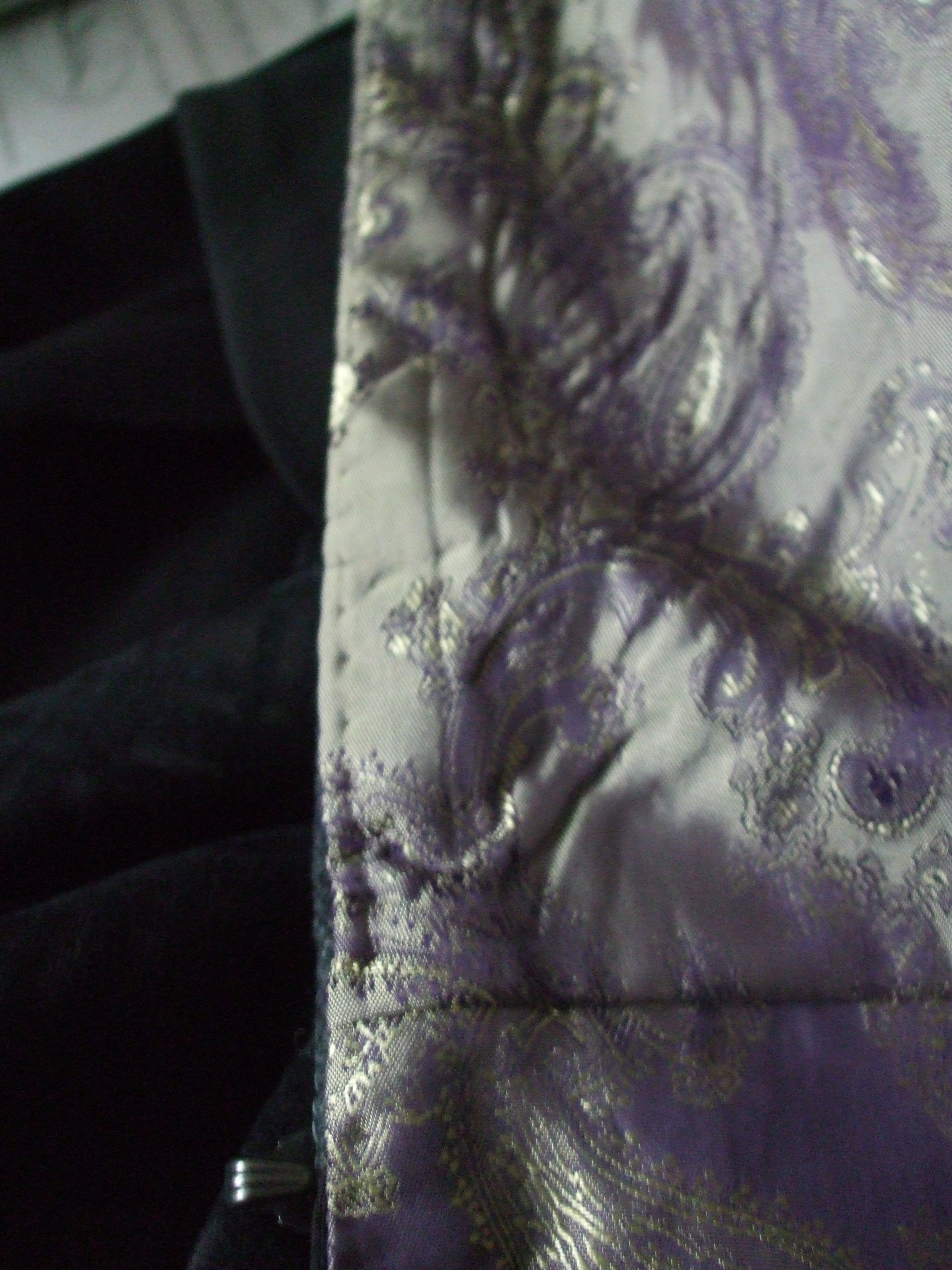 The lower front lining has a piece drafted onto centre front, which is interfaced, while the rest of the lower lining is not.  I’m not sure why there needed to be a seam there, I may omit that next time.

I was going to add a plain black hook and eye to fasten it, and may change it back if I think it’s too dressy after all, but meanwhile, I went for one of the leftover fancy hook fasteners from stash. [Previously used on Dawn’s silk corded bodice]. 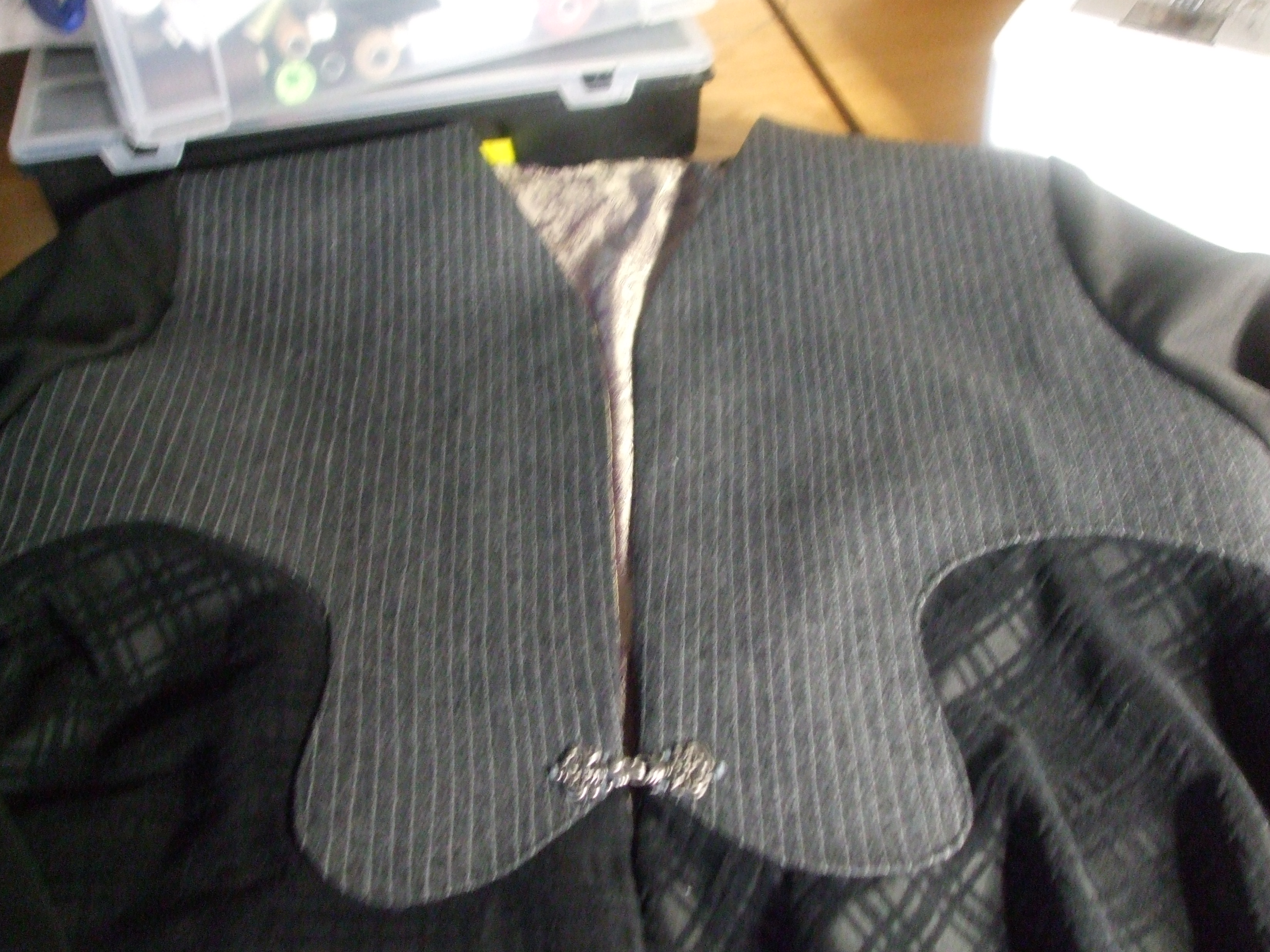 The swoosh and swing of this is lovely, and the fact that the upper bodice fits neatly, stops it from being just another voluminous Lagenlook piece,  which is not so great on big busts I think.  It’s beautifully drafted, and those curved yoke seams really do look great.  I also like the shape of the neckline.  Instructions said to top-stitch round the entire outer edge of the jacket, but my fabric choices and under-stitching made that obsolete, so I disobeyed. 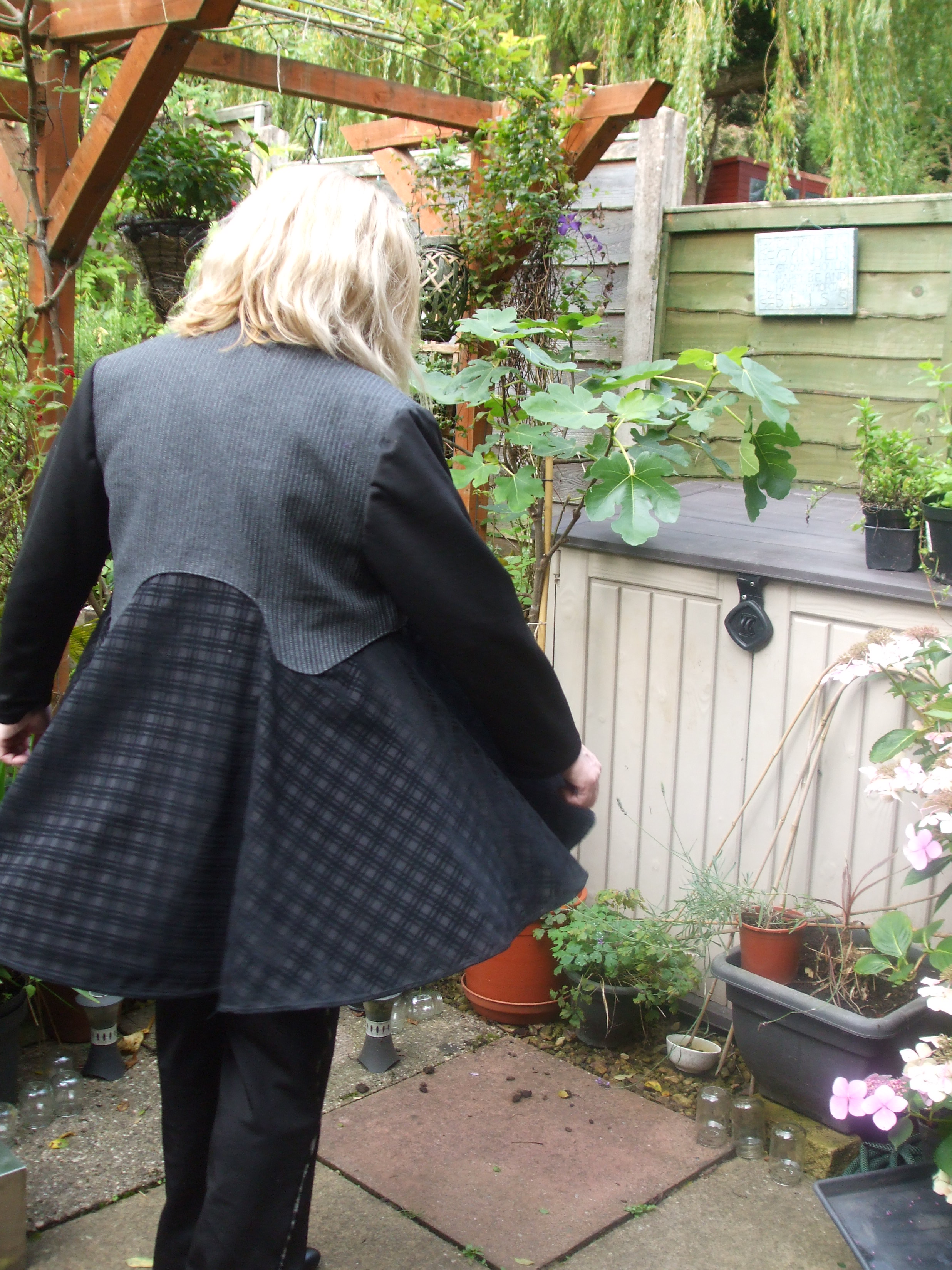 I really like this one, and Dawn loves it, but looking at the pics I really could do with a teeny bit more room in the front.  Having said that, the velvet tunic I’m wearing with it is fairly bulky, so I’ll decide later- as there will be another version of this. 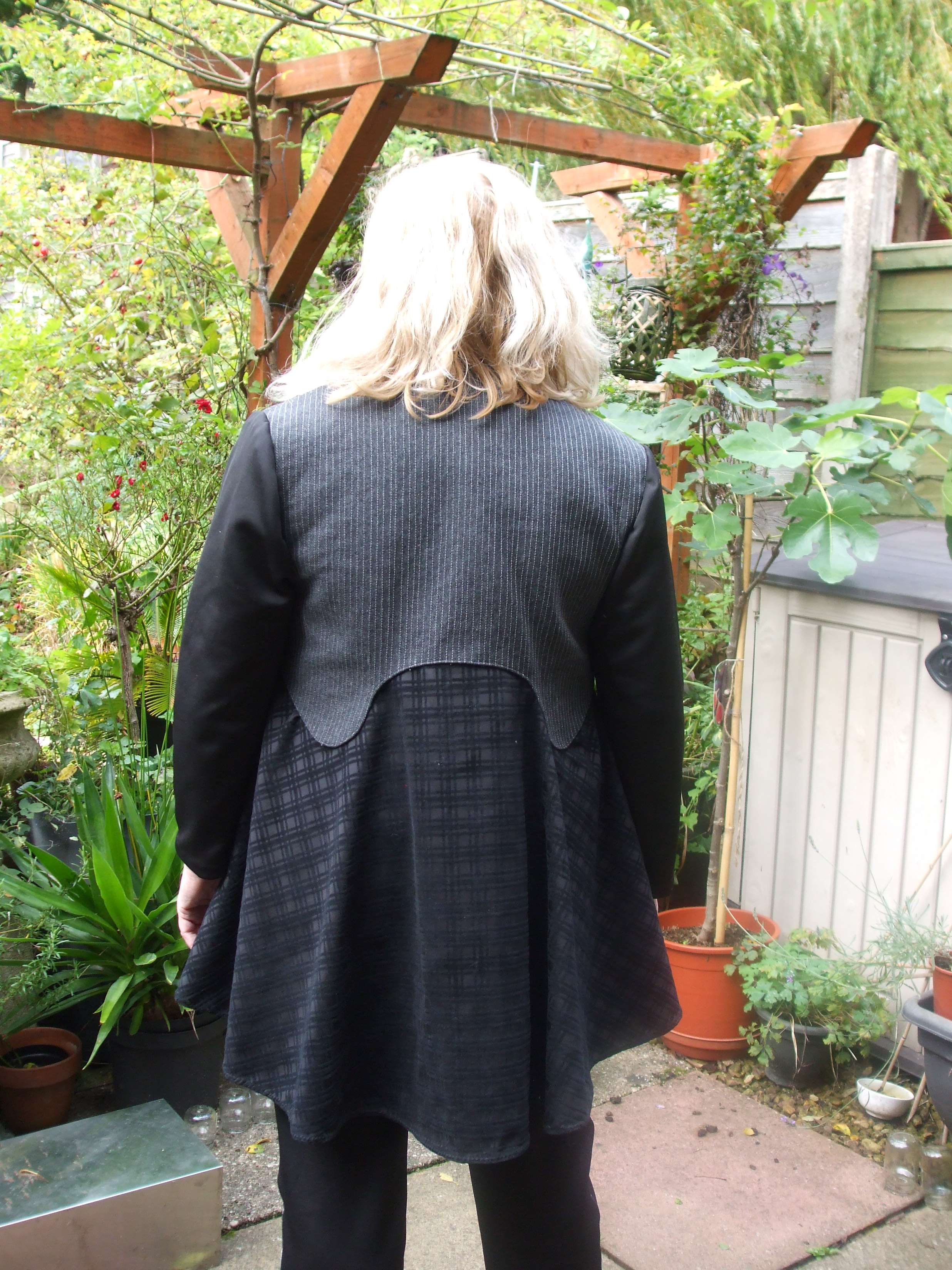 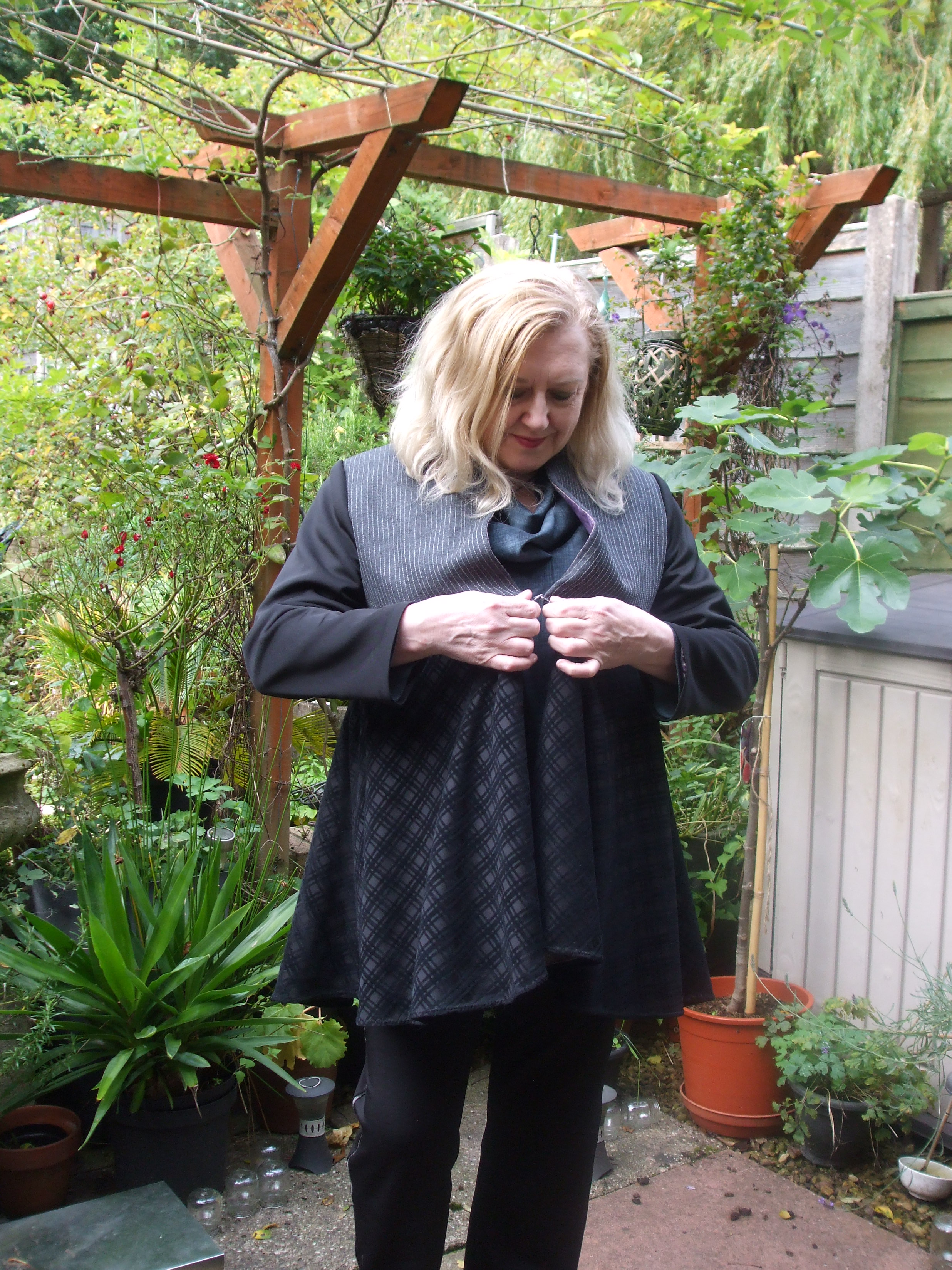 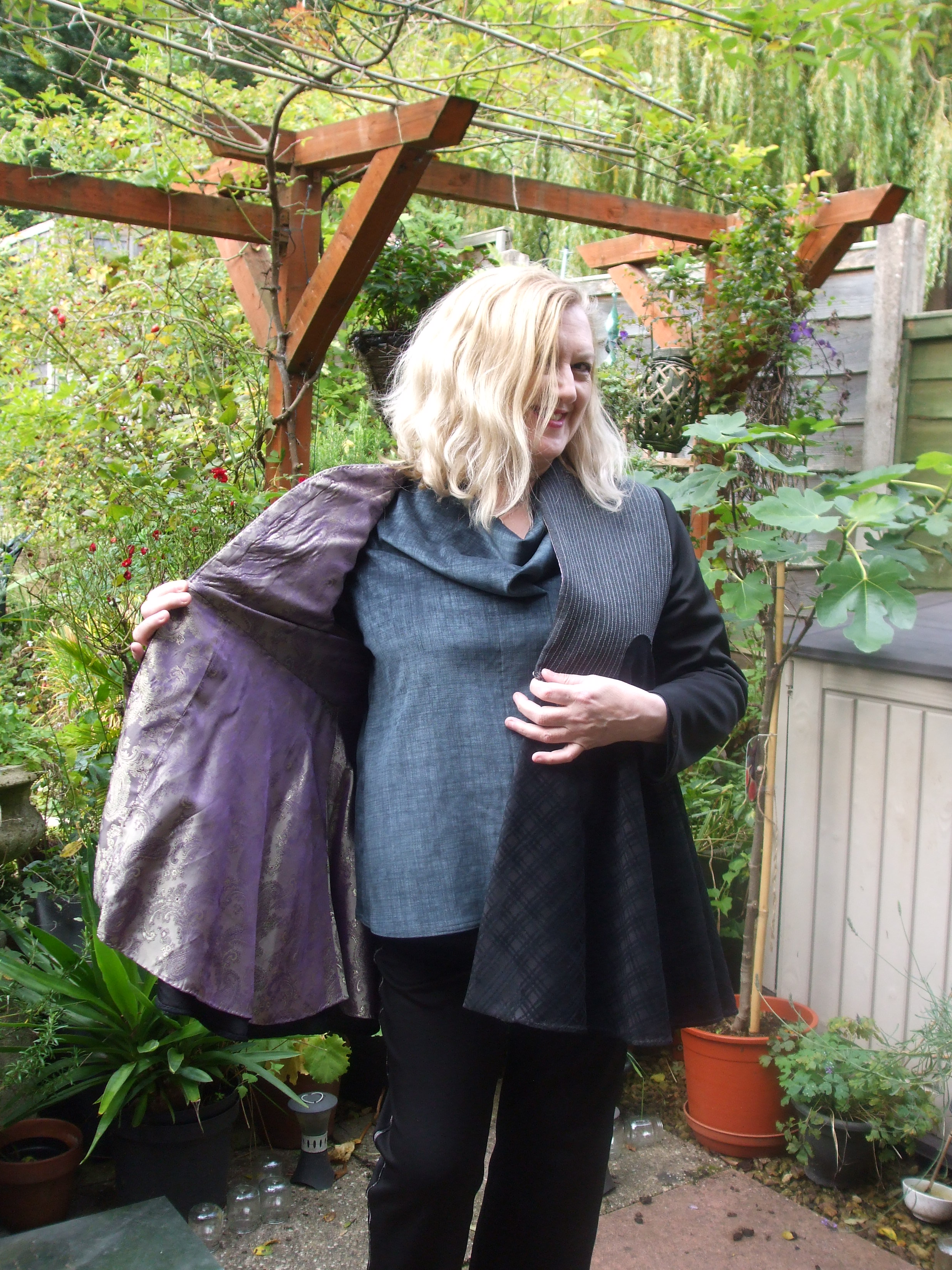 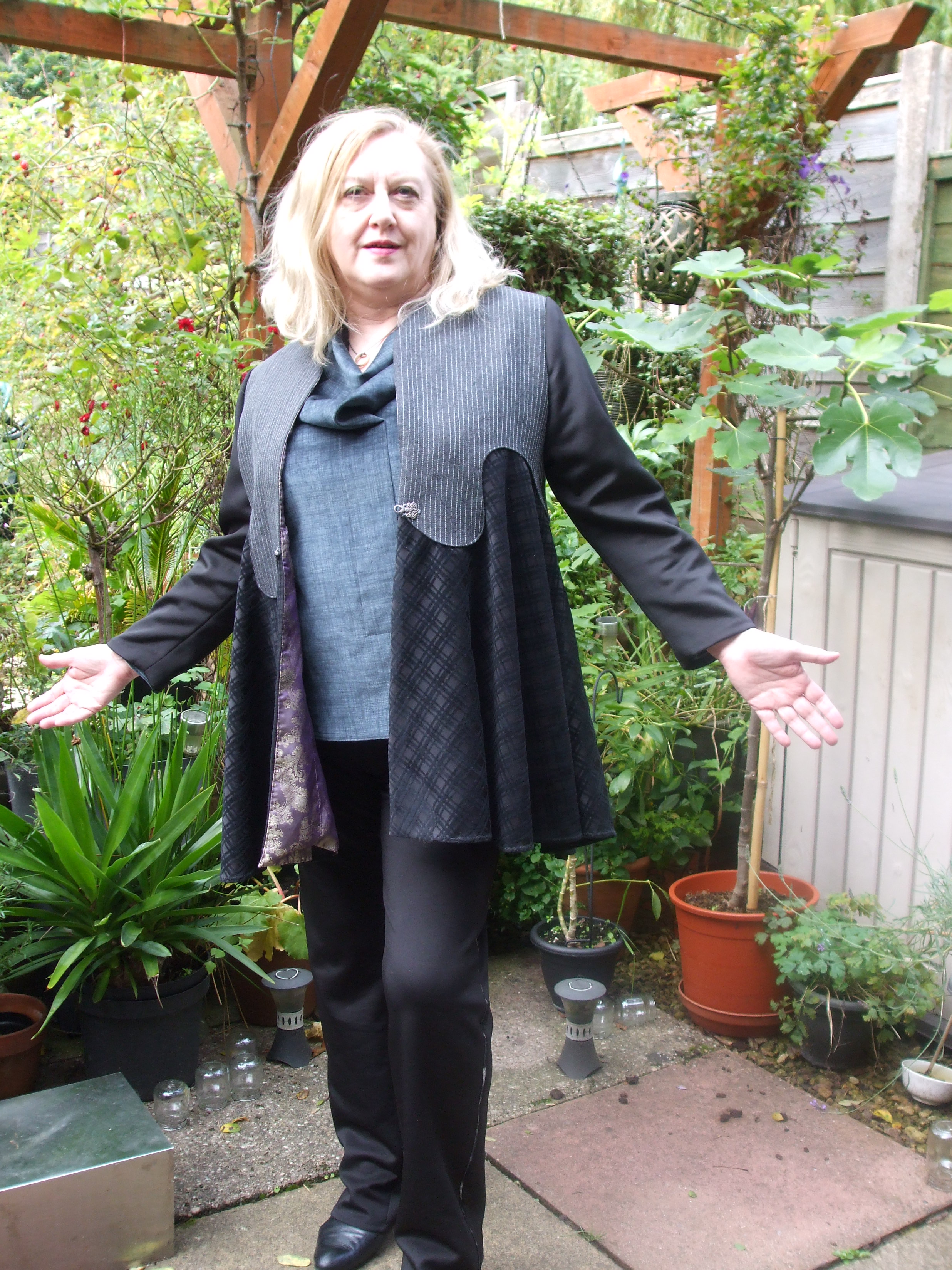