Why oh why do I never bother to read anything on Pattern Review until AFTER I finish, or hit a snag?  Ah well.

Now,  there are a lot of pieces in this jacket, plus zip pockets, sleeve zips, and a diagonally set front opening zip.  I bought the zips at the market months ago, nothing special, just plastic zips in a relatively OK shade of beige.  As I’ve moved through the cut out pile, and it’s been shifted round and round the room, these damn zips have fallen off the pile, out of boxes, and generally been underfoot a million times.  They ended stuffed into a drawer.  Until now…

Because of the number of pattern pieces, I decided to try to more or less follow the pattern instructions [VERY sparse], adding in some common sense touches and a bit of production line sewing [glance through instructions, pin everything that can be pinned, sew the lot, press, and assemble all the bits]

Wifey wanted just the shoulder yokes quilted, and just vertical lines, so I chalked them on, and quilted it using a scrap of the felt-like fabric from the 1950s peplum dress.  Final result, very satisfactory! 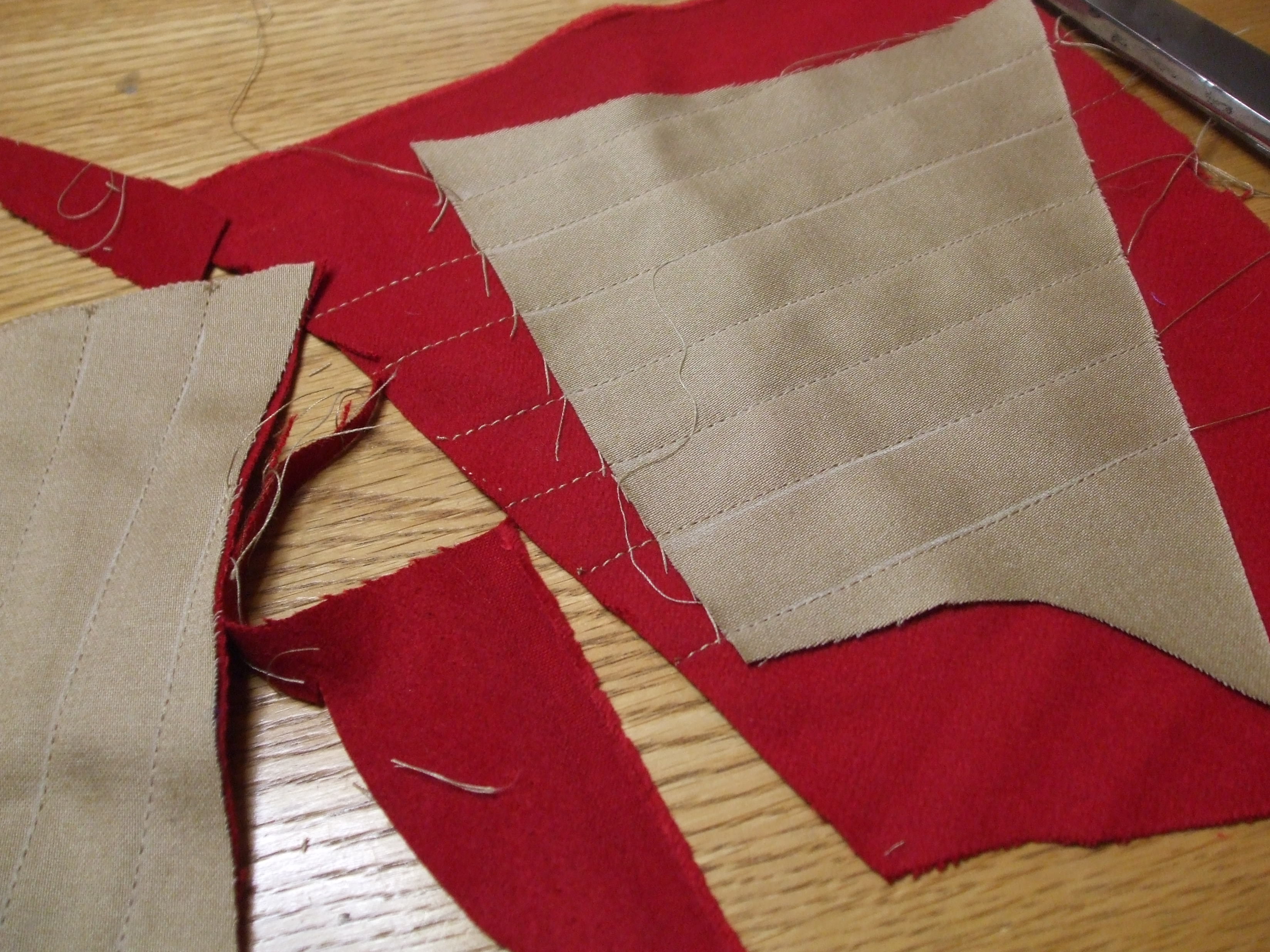 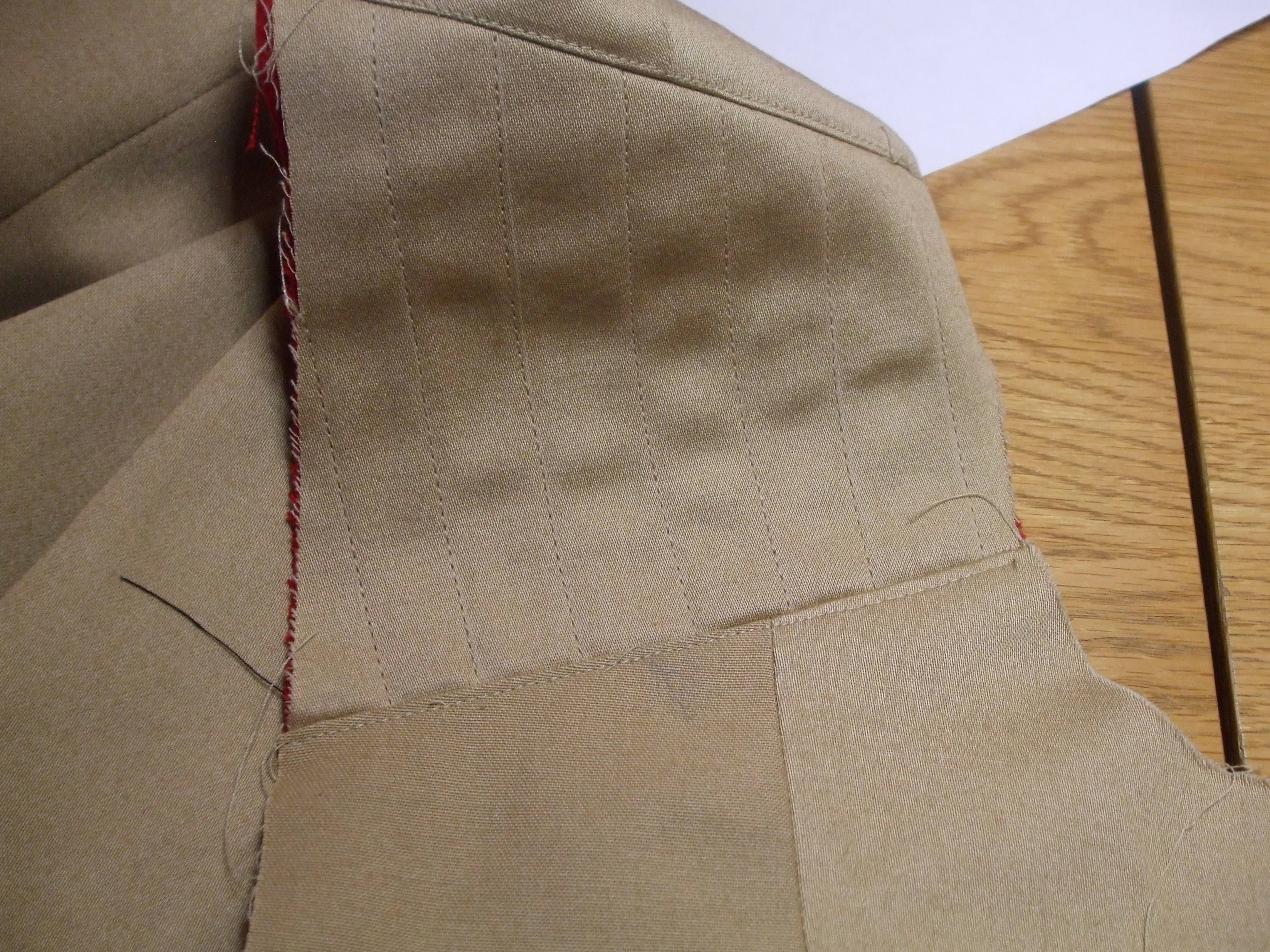 Pockets came in at about step 4, and apart from attaching pocket facings the SENSIBLE way [turn under seam allowance and edgestitch down] I just zoomed them in.  Then looked again.  Re-read the instructions several times, re-read the notions list.  Yes, the pockets are supposed to have zips, no, there is NO MENTION of zips in the instructions.  I hit the internet.  Well, yes, after the fact, this is me.   Quite a few mentions of the lack of instructions for inserting zips, plus a couple of good tutorials [I like Shams’ the best].  However, StyleArc only allow 3/8″ seam allowance, I’d already trimmed and understitched the ruddy pocket bags on. 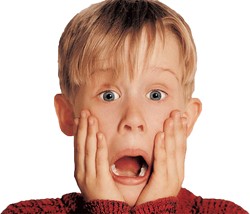 I pondered, swore, pondered.  Showed the work so far to the missus, who suggested ‘just sew the zips in the space’.  She survived, just.

We decided not to bother, I can always make another one [for me, for me] with the zips added.  I sent StyleArc a stern message though.  Would it be so hard, given that this has been on the market for EONS, to just amend the pattern or add a warning slip to each pack?  I think not.  *Wags finger sternly*

While hunting for the tutorials, I saw some for inserting a sleeve gusset behind the zips.  Then I noticed warnings about zip sizes not being spot on in the instructions.  I flinched, and looked at my zips again.  Good grief Fairy!

I’d bought a 22″ heavy duty plastic zip at the market, maybe because that’s all there was [the Rag Market is amazing, but for fancy specialised zips, the internet is better!]  The space for the zip is 20″.  My fault.  Dammit.

That would have been bad enough, but I’d not noticed that all the short zips are ruddy INVISIBLE ones.  Jeez.  So I hit t’internet, and browsed for ages on the McCulloch & Wallis page.  Chose zips, including the end post thingies to shorten metal zips cos none are the right length.  To the checkout.  TWENTY FIVE SQUID FOR THREE ZIPS??  Er no.  eBay to the rescue, three simpler zips on the way for about £7.  Much better.  What to do while I wait for delivery?

I’d already decided not to machine topstitch, because my top stitching skills are poor to say the least, the fabric is light and unforgiving, and I like adding little special touches to clothes for the missus.  Also, it allowed me to do a fitting partway through assembly, which was good, as it needed quite a bit of finessing to give it  a waist at the right height for my little missus!  The size 18 fits beautifully across her broad shoulders, skims her hips as a jacket should, but floated several inches away from her waist.  Easily fixed.

And now for the top stitching…

19 thoughts on “Ziggi played for time…”