The fabric was reclaimed from the first steampunk skirt I made, for which I didn’t use a pattern [never a good idea for me, I like the thinking to be done for me!]  I made the yoke too stiff, the idea I had of using a decorative chain to gather up the front didn’t work well, and I ended up getting peeved with it after one wear and just bunched the back up and ‘bustled’ it very scruffily.  So it didn’t get worn.  I made much nicer steampunk skirts after this one, and I’ve worn them a lot, this was just taking up space.

The skirt is meant to be just a plain cut front and back, but fabric limitations made me introduce a CB seam and slightly ignore grainlines.  I told myself it wouldn’t matter, as the skirt is full and drapey anyway and the taffeta is pretty lightweight.  I used French seams for neatness and a little strength on those off-grain seams.

The waistband is a simple folded piece with a double elastic channel through it, and the whole things is quite sleek at the top, sliding nicely over my hips.  Anyone with more booty might have trouble though- something to check before you get to that stage!

The instructions for the hem are eminently sensible, including basting it in place, in four sections, then catch stitching the folded points down before machine stitching all in one pass.  This is what I would have done anyway, but I know some newer sewers would have tried to go straight for fold and machine without basting.    I considered hand hemming, my usual preference, but machining looks neat enough on a narrow hem.

After it’s all assembled, tapes/ribbons are attached inside, and then tied to get the gathered sides.  Nice! 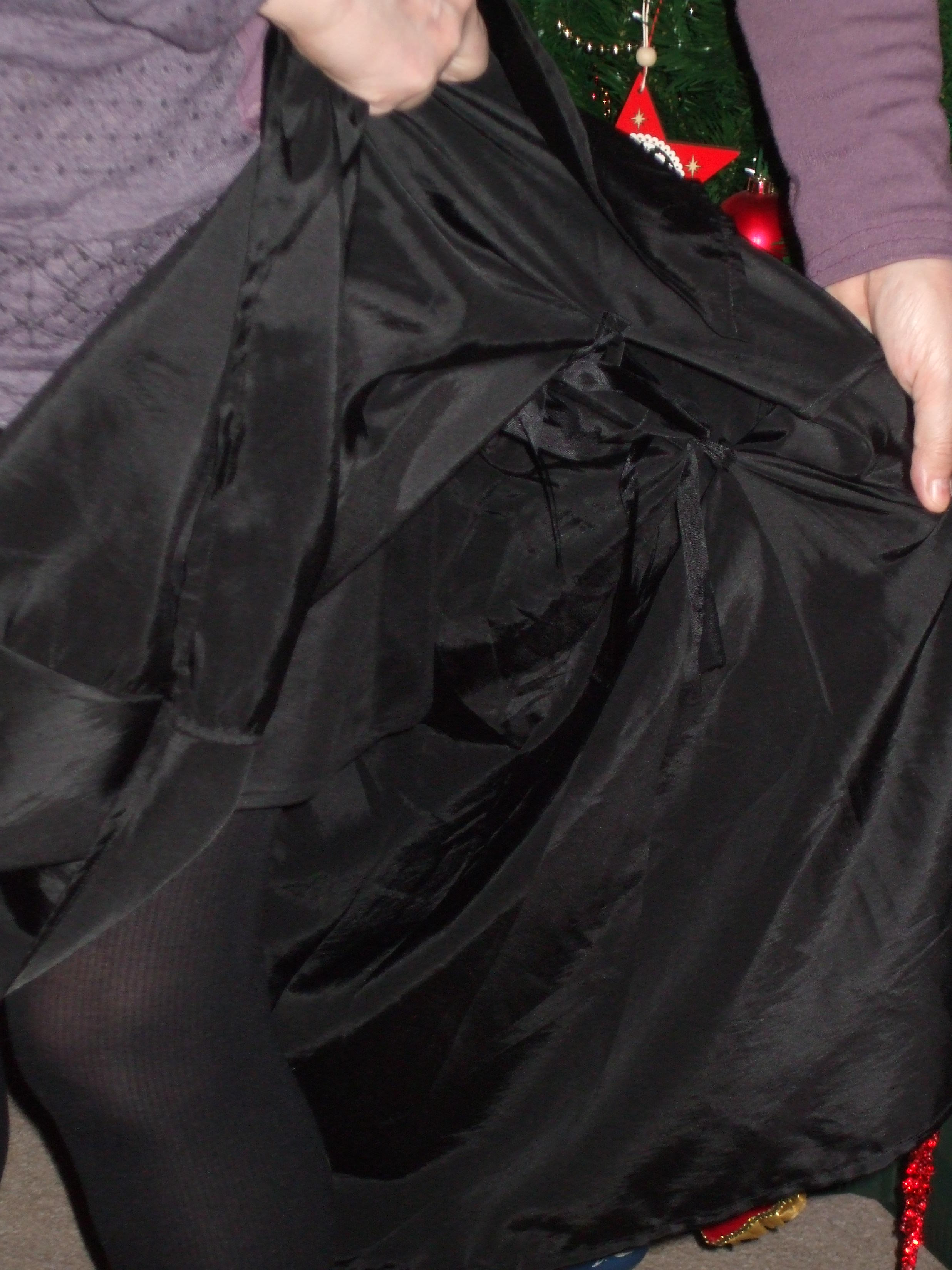 It’s got a bit of a Stevie Nicks vibe, and is actually shorter than I expected, with those side curves, bustled, coming to about knee length.  I could move the ties if I want to adjust that, simple enough.  You can see where it’s cut off grain along the CF and CB, but I’m not fussed, it’s already drapey and gathered, why worry? 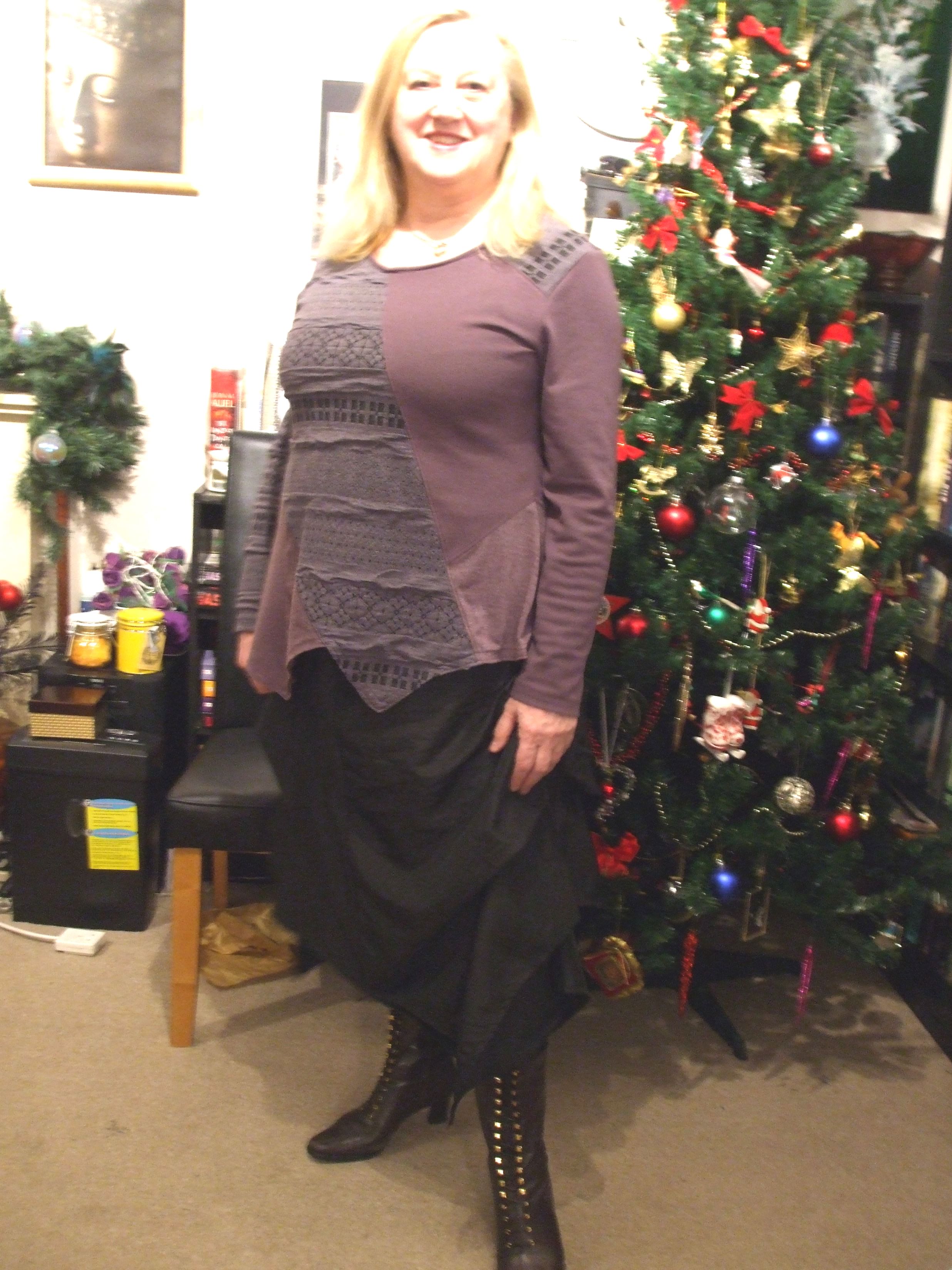 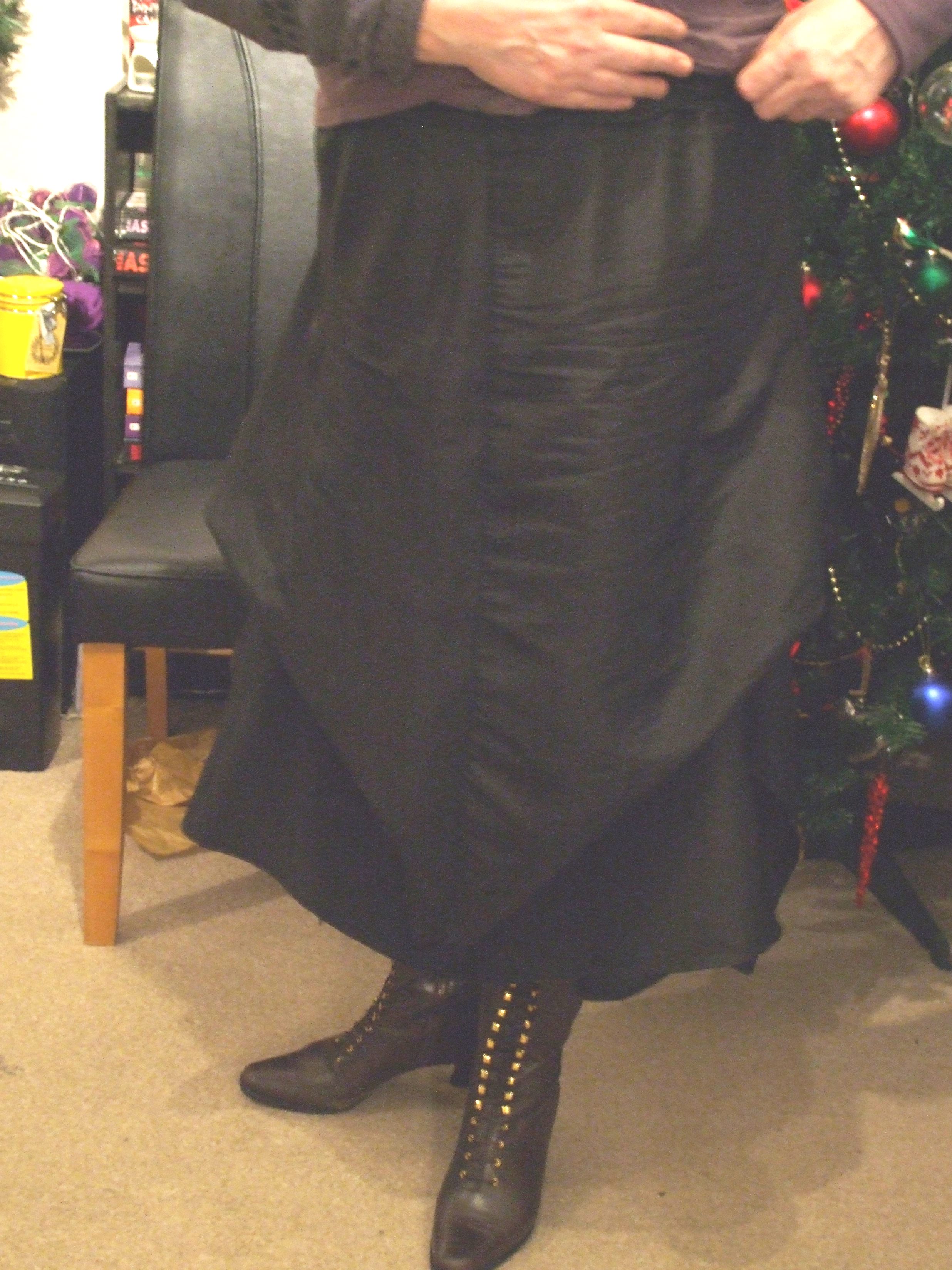 An easy, interesting-looking make, another is definitely needed for summer wear.  The waistband is soft and comfortable, and [I’m wearing it as I type] not rolling under the pressure of my belly or digging in.  Result! 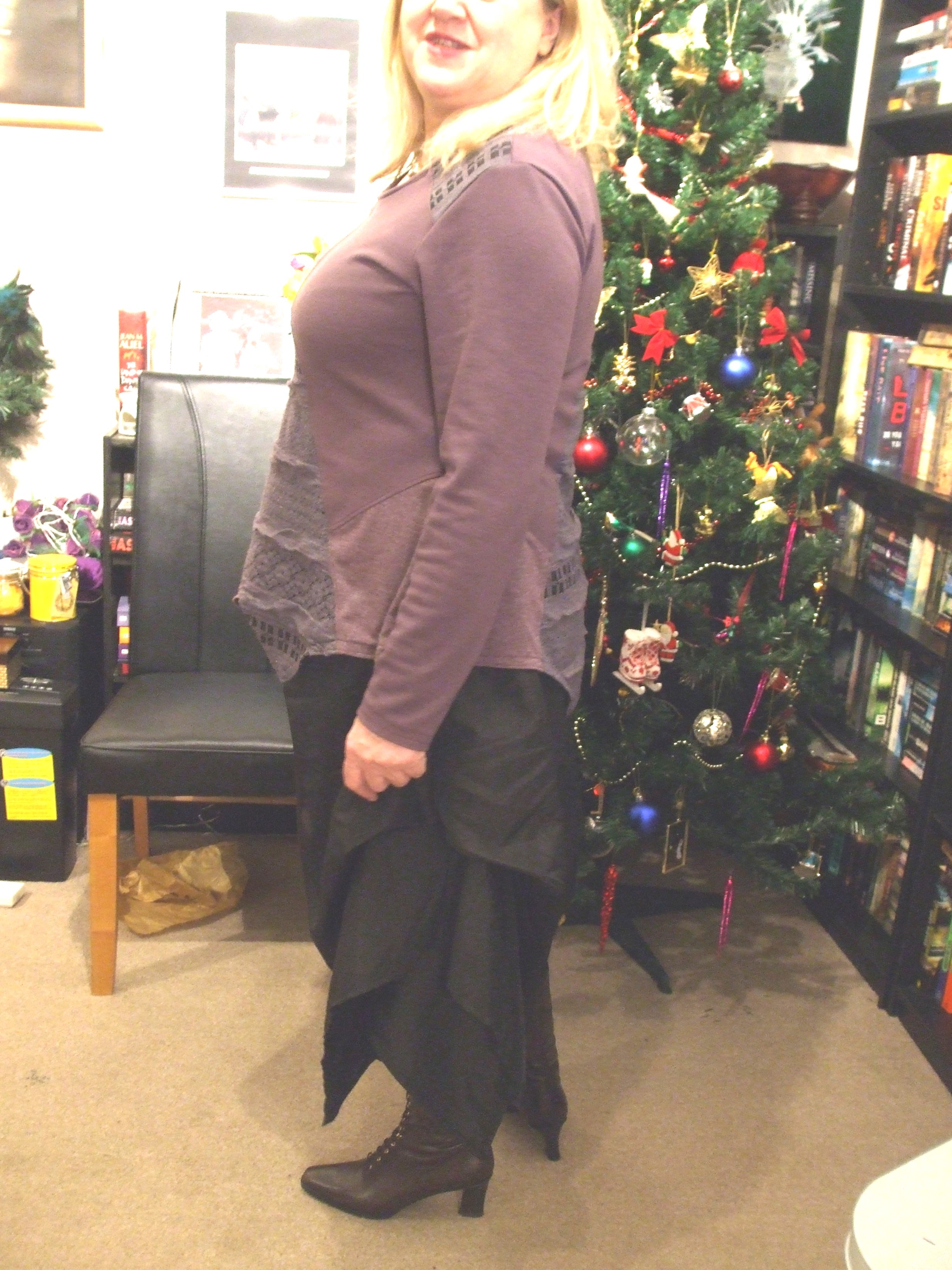 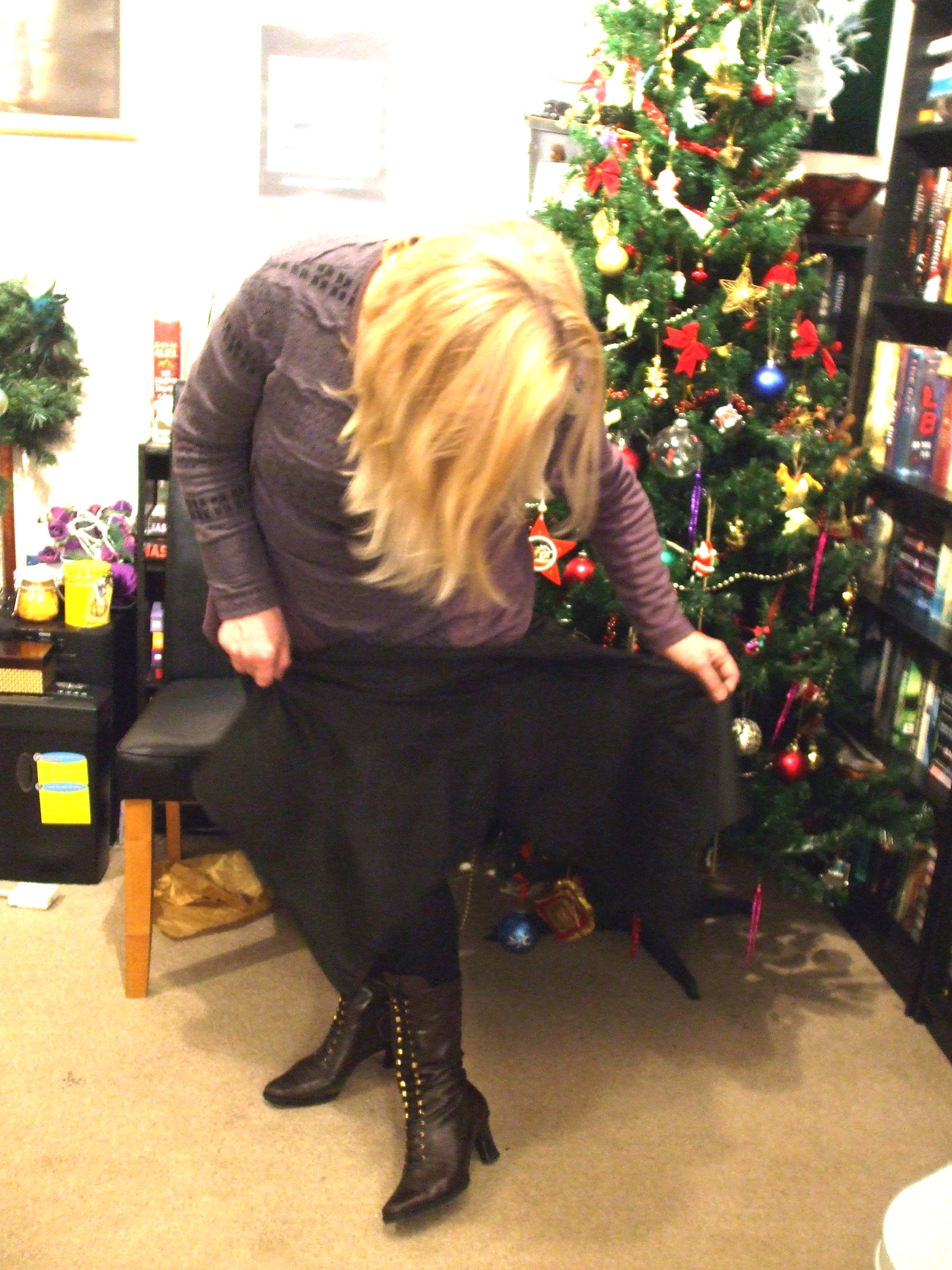 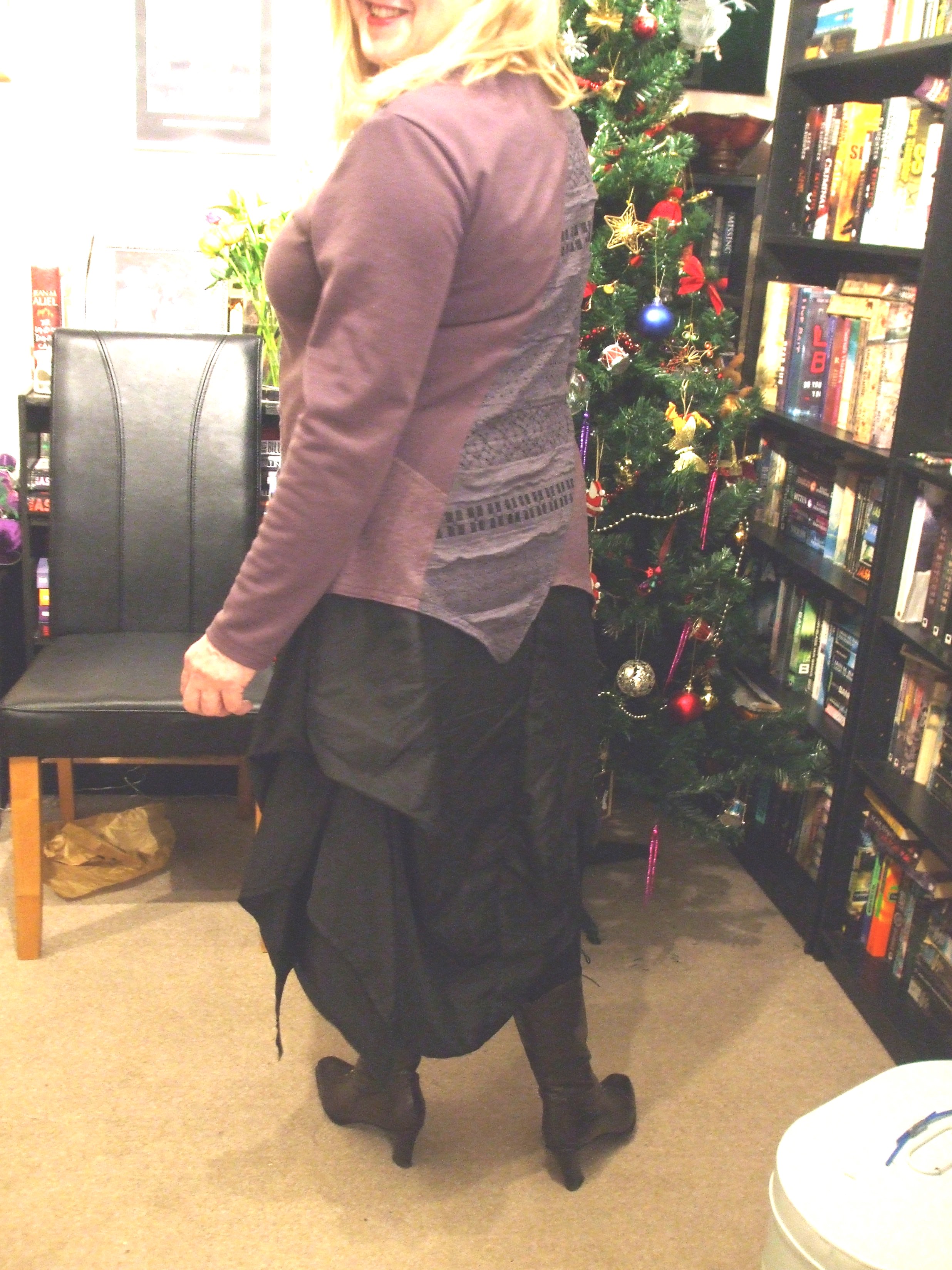 And why rosebuds?  Because something is making me want to add one of those glorious rose appliques I snaffled a few years back, even though this is meant to be a simple basic piece to go with lots of stuff.  The roses WANT to be on this.  What do you think?  After all, it’s mostly meant to go with red and black separates… 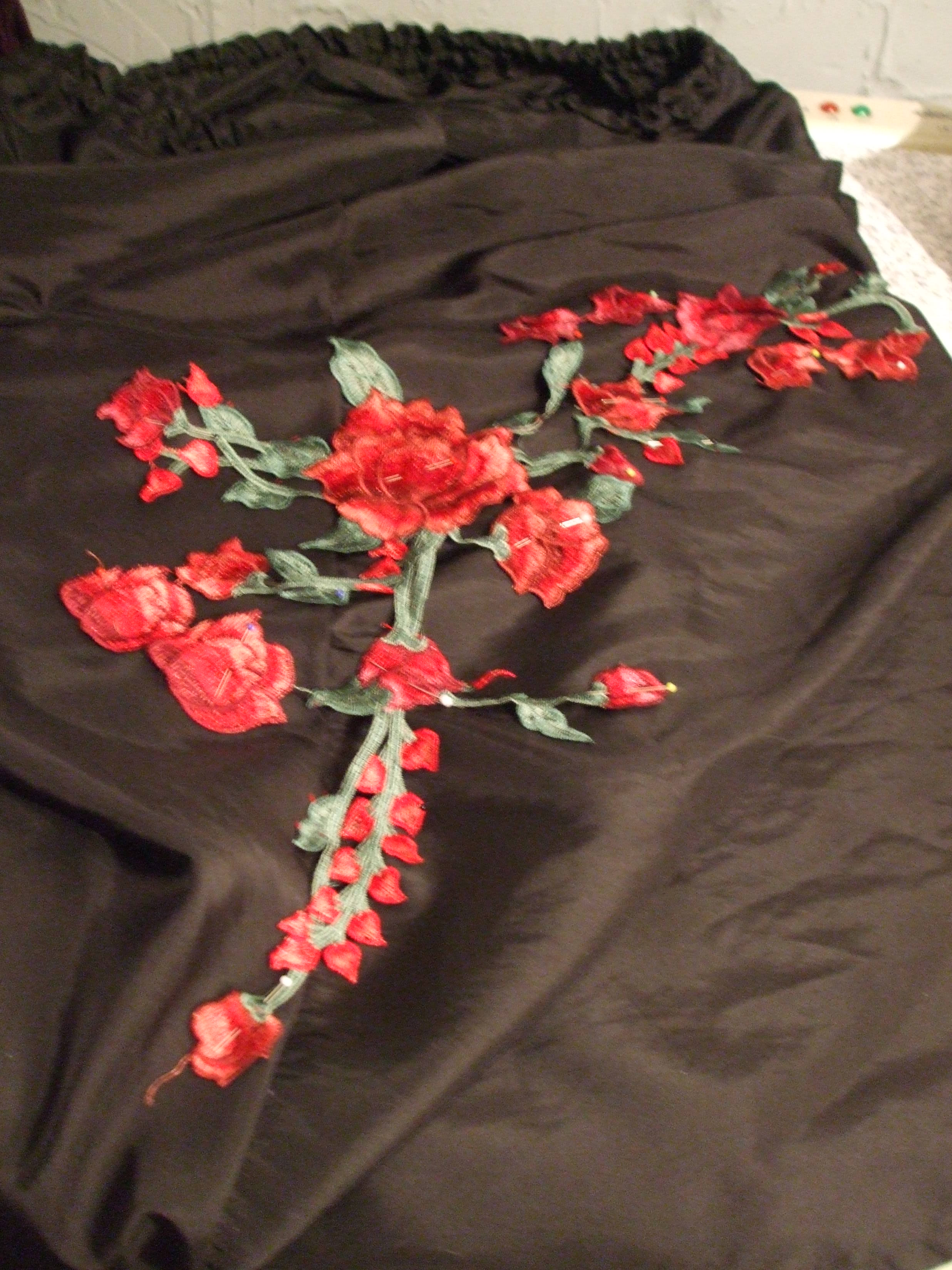 Gather ye rosebuds while ye may,
Old Time is still a-flying;
And this same flower that smiles today
To-morrow will be dying.

The glorious lamp of heaven, the sun,
The higher he’s a-getting,
The sooner will his race be run,
And nearer he’s to setting.

That age is best which is the first,
When youth and blood are warmer;
But being spent, the worse, and worst
Times still succeed the former.

Then be not coy, but use your time,
And, while ye may, go marry:
For having lost but once your prime,
You may forever tarry.

“To the Virgins, to Make Much of Time”