Both pieced, may or not make it into the SWAP collection.  Why?  Well, I’m making more than the required 11 items, for one thing, but also because I’m having trouble deciding what to count as my ‘print’ or ‘prints’.  I have my 2 neutrals, black and grey [and these two tops are both black and grey].  My accent is red, and I have been using that here and there…but one red top already includes the remnants of red/black/grey print from an old dress.  DO I count that as a print, or as part of my other colours?

I have here two prints- the black and white mathematical one, which was my original inspiration for doing  a mathematically/geometrically inspired collection, but I don’t have  a lot, and wouldn’t want a garment made in just that anyway.  Tricky.  The Alexander Henry big cats print is just something I bought on a whim, I really love it, and think it works here.

We are told to interpret the rules as we see fit, so I think I may well just do my own thing, and see who objects lol  This is the way I go through life in general anyway.  Any opinions?

Nothing much to add to the last version EXCEPT …I actually did the FBA this time, including one on the existing dart, and one introducing a dart into the princess-seamed side piece.  I know I should probably have rotated that out, but y’know what?  meh.  It looks balanced this way, so I’ll roll with it.  I also added a pocket into the side which had none, just because it feels weird only having one pocket.

I sewed both up at once, making the whole process quite speedy.  The instructions are, of course, sparse, and don’t mention useful points like- neaten the lower edges BEFORE mitring and turning through, and think about which way to press the seams before topstitching, especially if using multiple fabrics, so you get the best contrast.

I topstitched by hand, just because, using red on the grey big cat top, and black on the mathematical one. 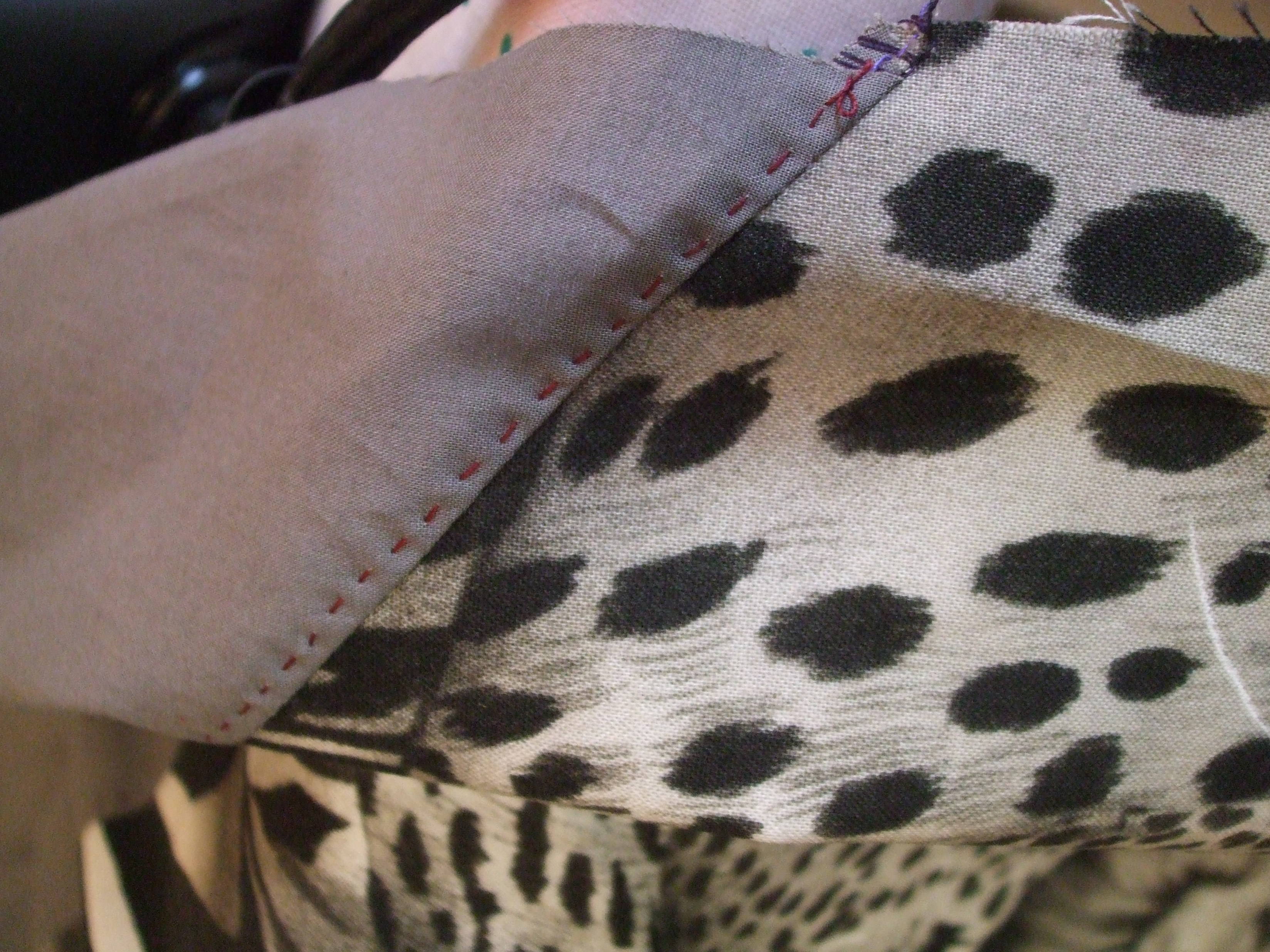 After trying them on, I again took out a fair swoop of the back, curving in at the waist, and took a skinge out of the sides, shaping at the waist again.  I also made the sleeves narrower, particularly on the black one where I was using jersey.

I made a bias facing on the grey top, and a simple band edging on the black.

The grey one lacked something- the wife said accessorise with red beads or some such, but I don’t really bother with accessories or jewellery any more.  In the end, after rummaging through stash, I added two rows of grey narrow ribbon on the fornt plain panel, and then a slightly wider, darker grey round the neck and on the pocket edges, to trim AND stabilise…much better! 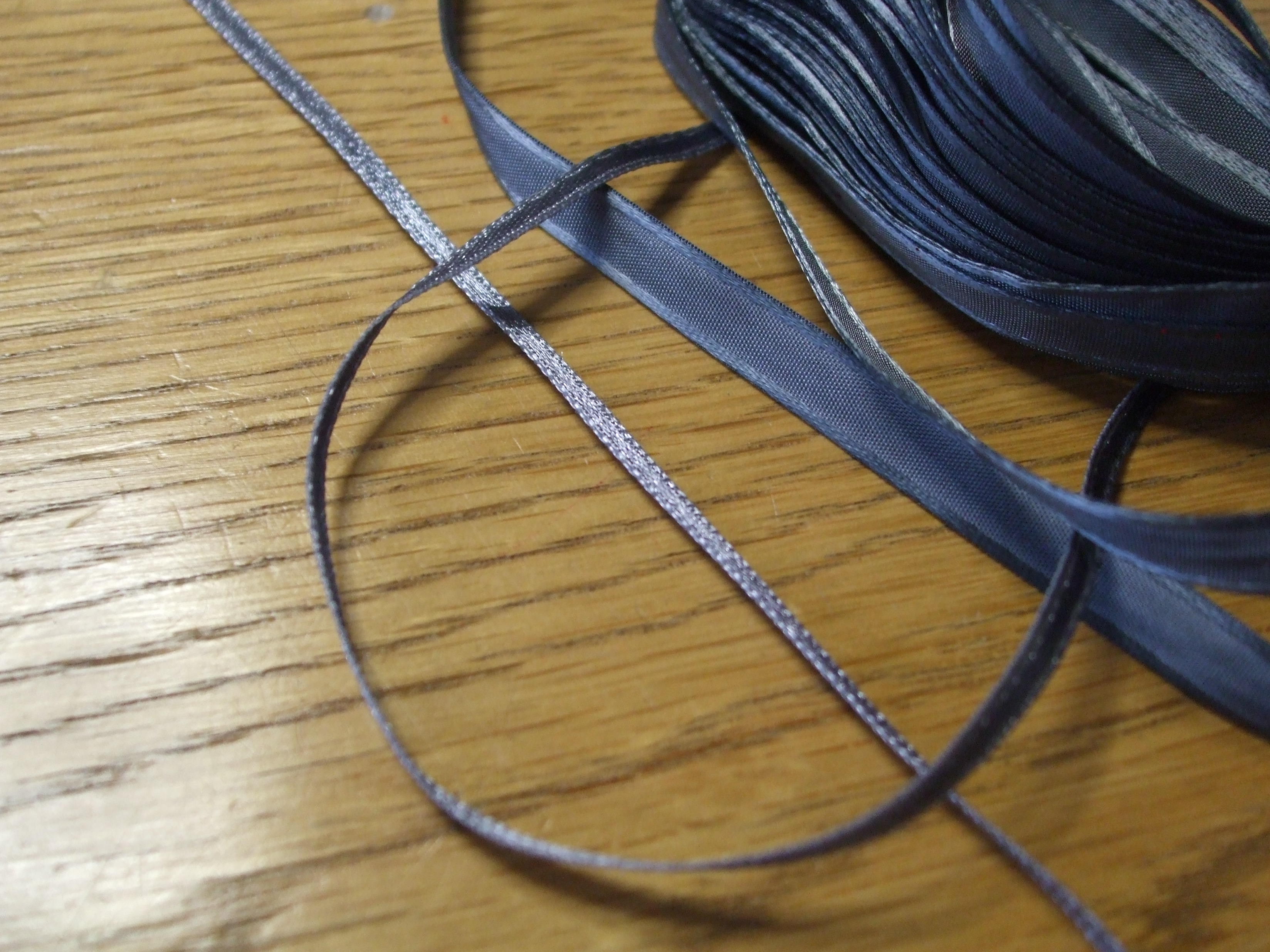 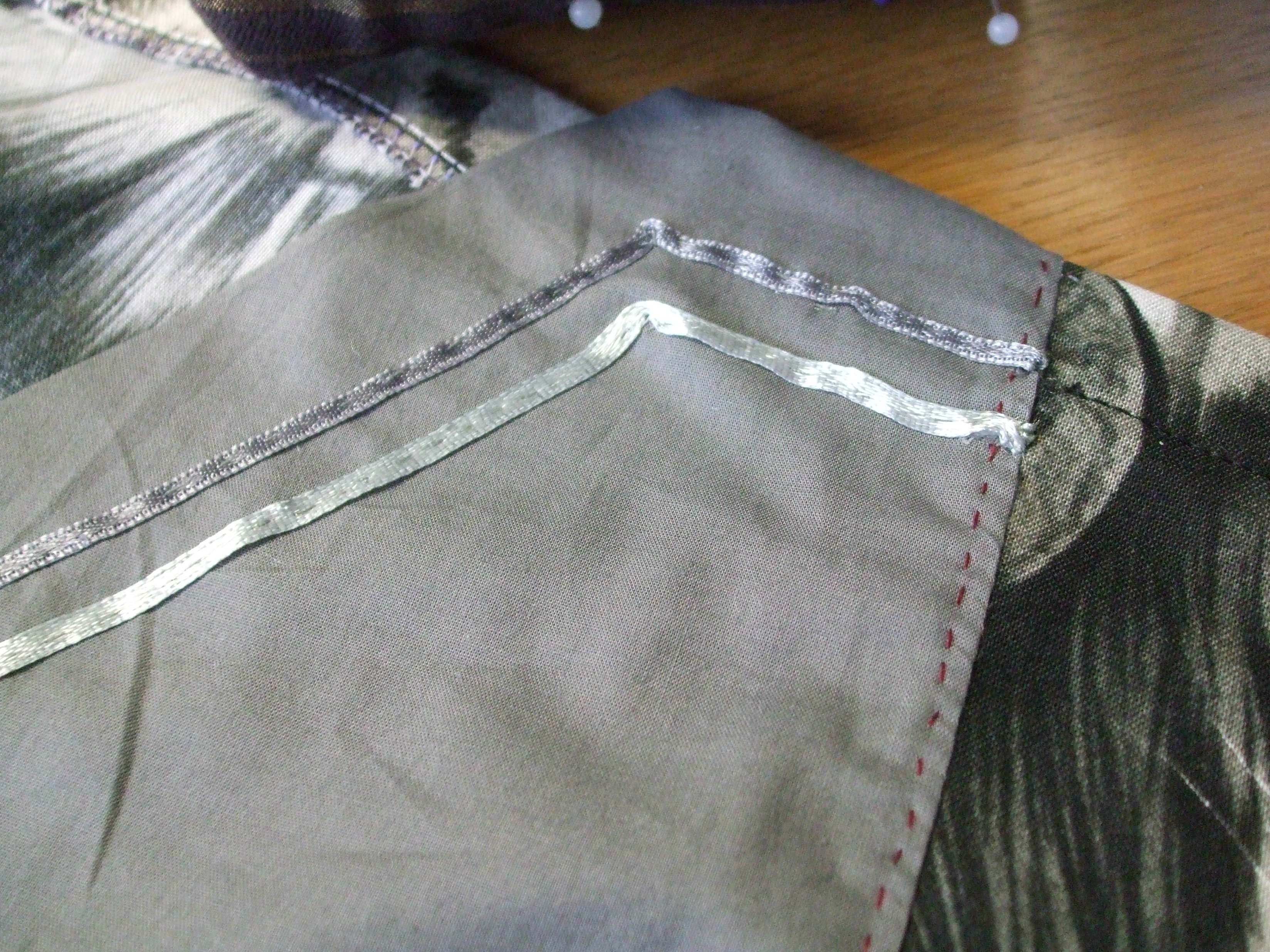 The black one is great though, and I’m much happier with two pockets- this one may well get worn for interviews, comfortable, smart [with the pinstripes] and mathematical too.  What do you think? 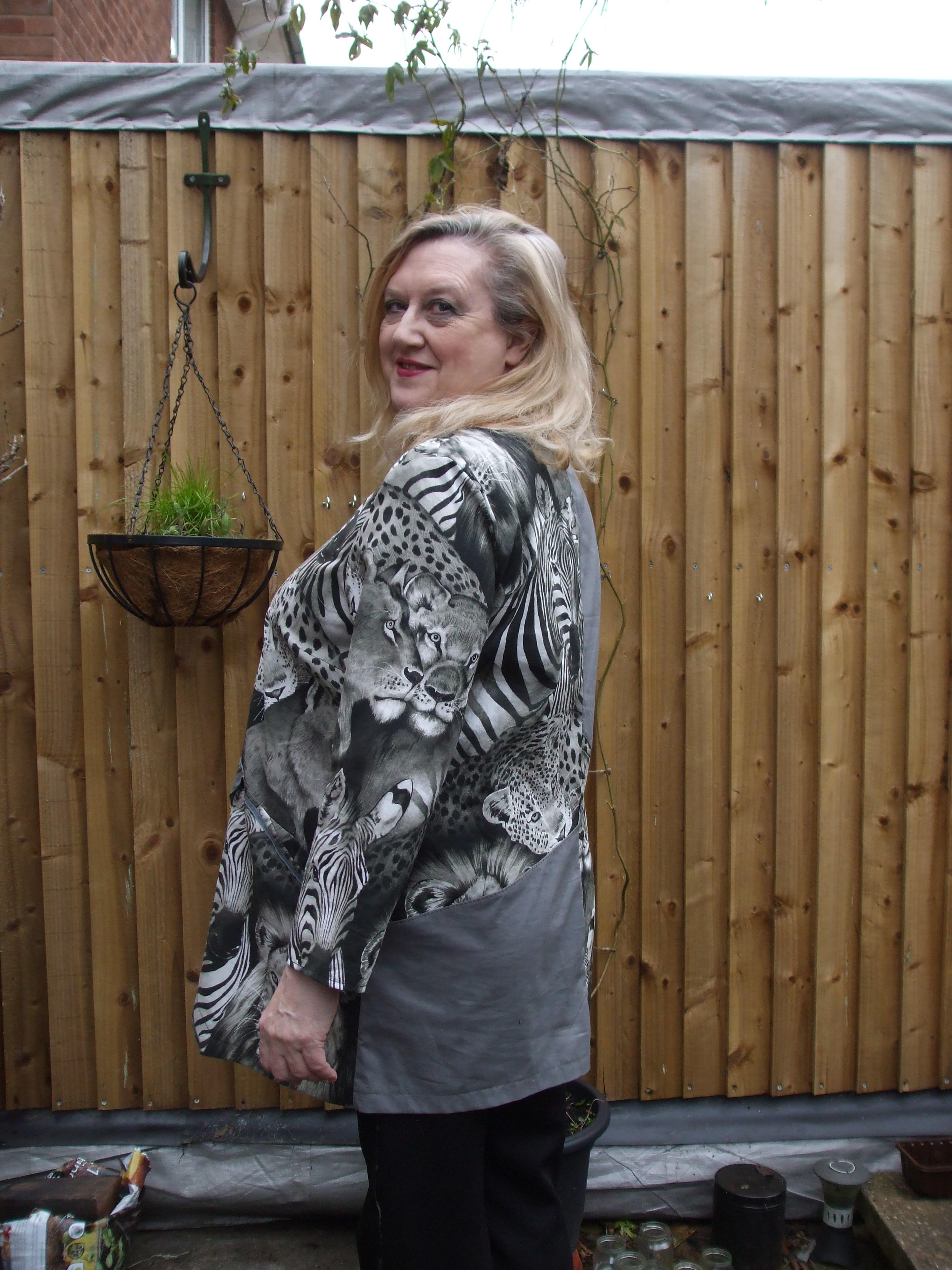 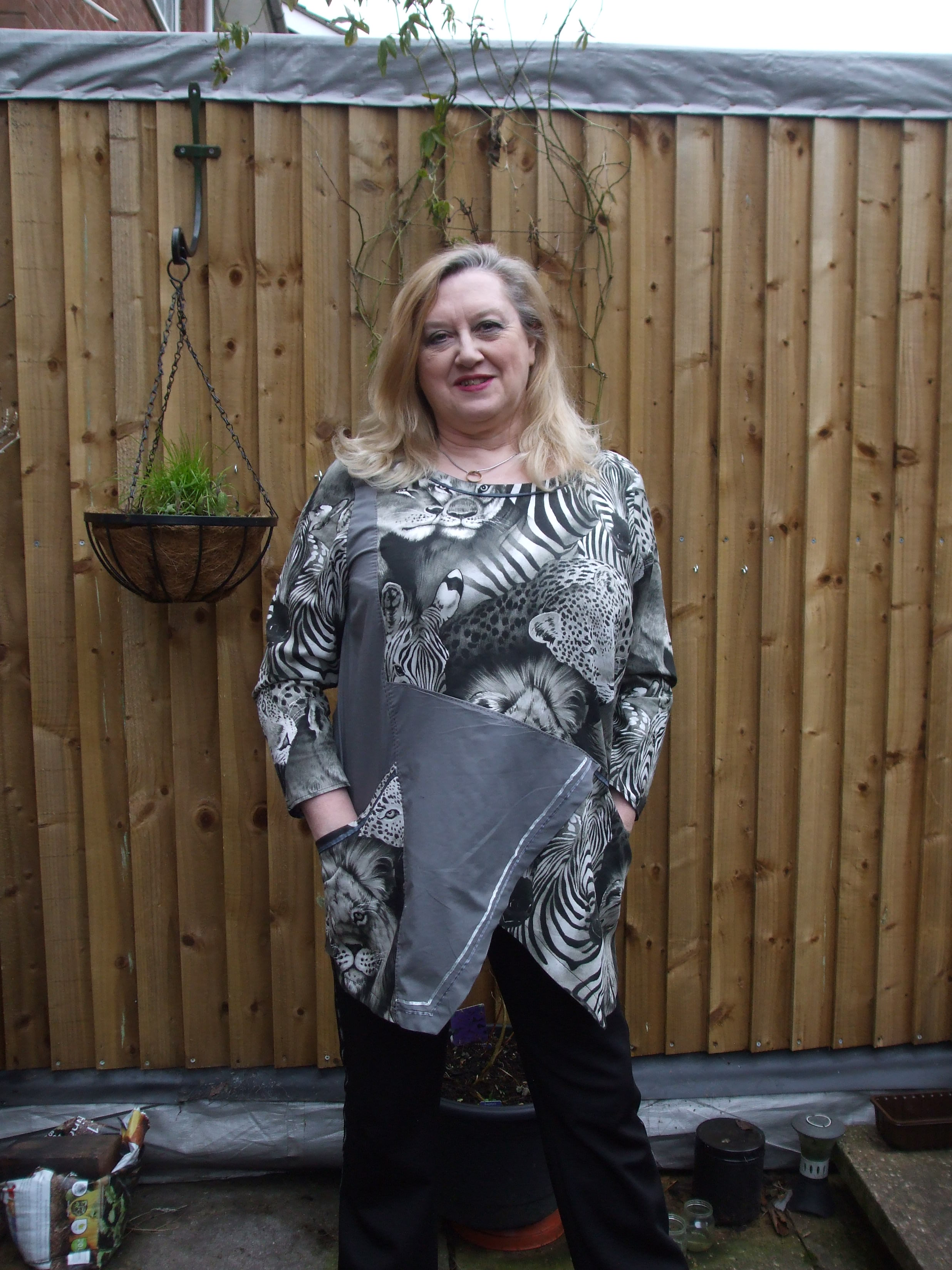 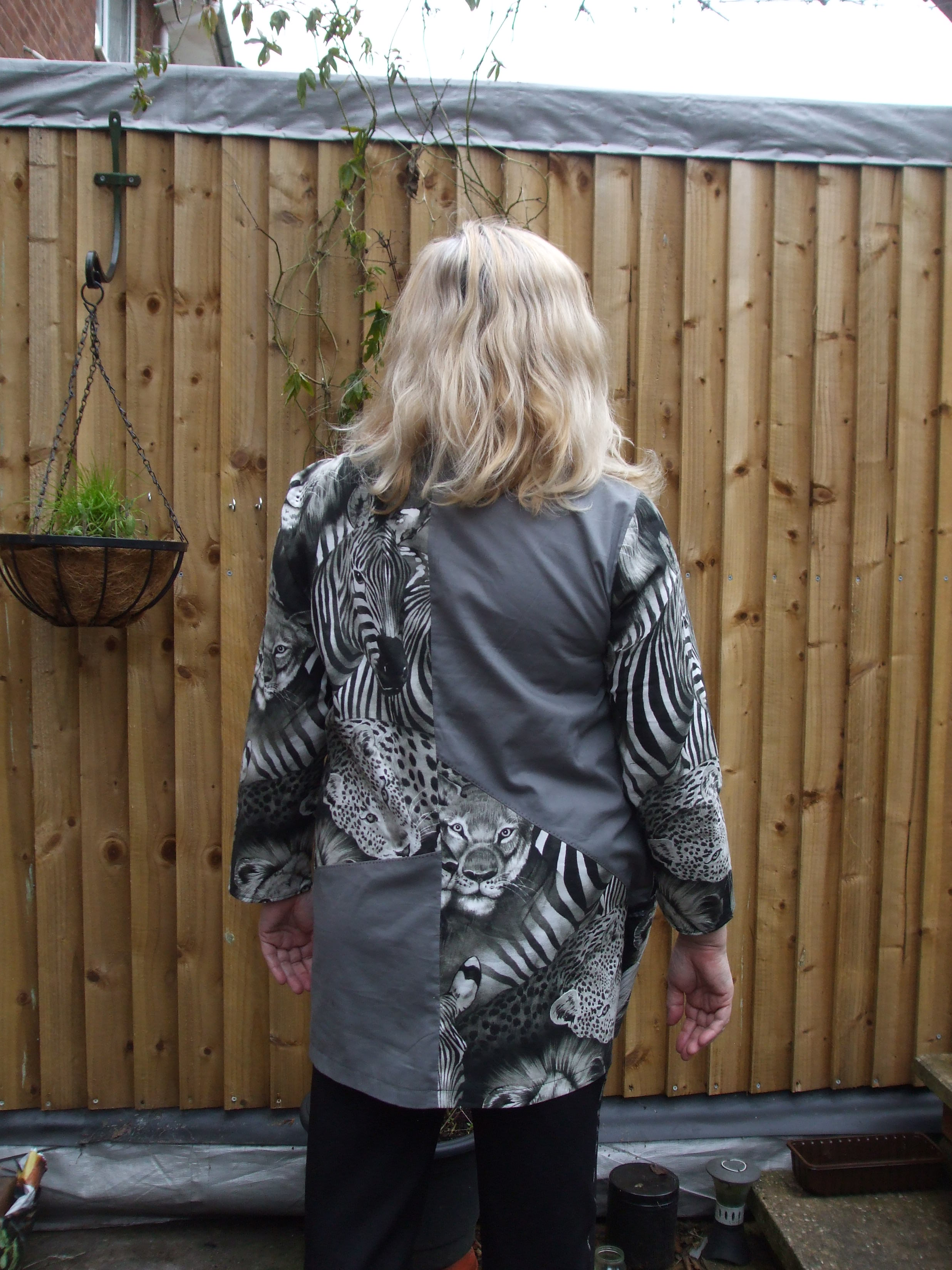 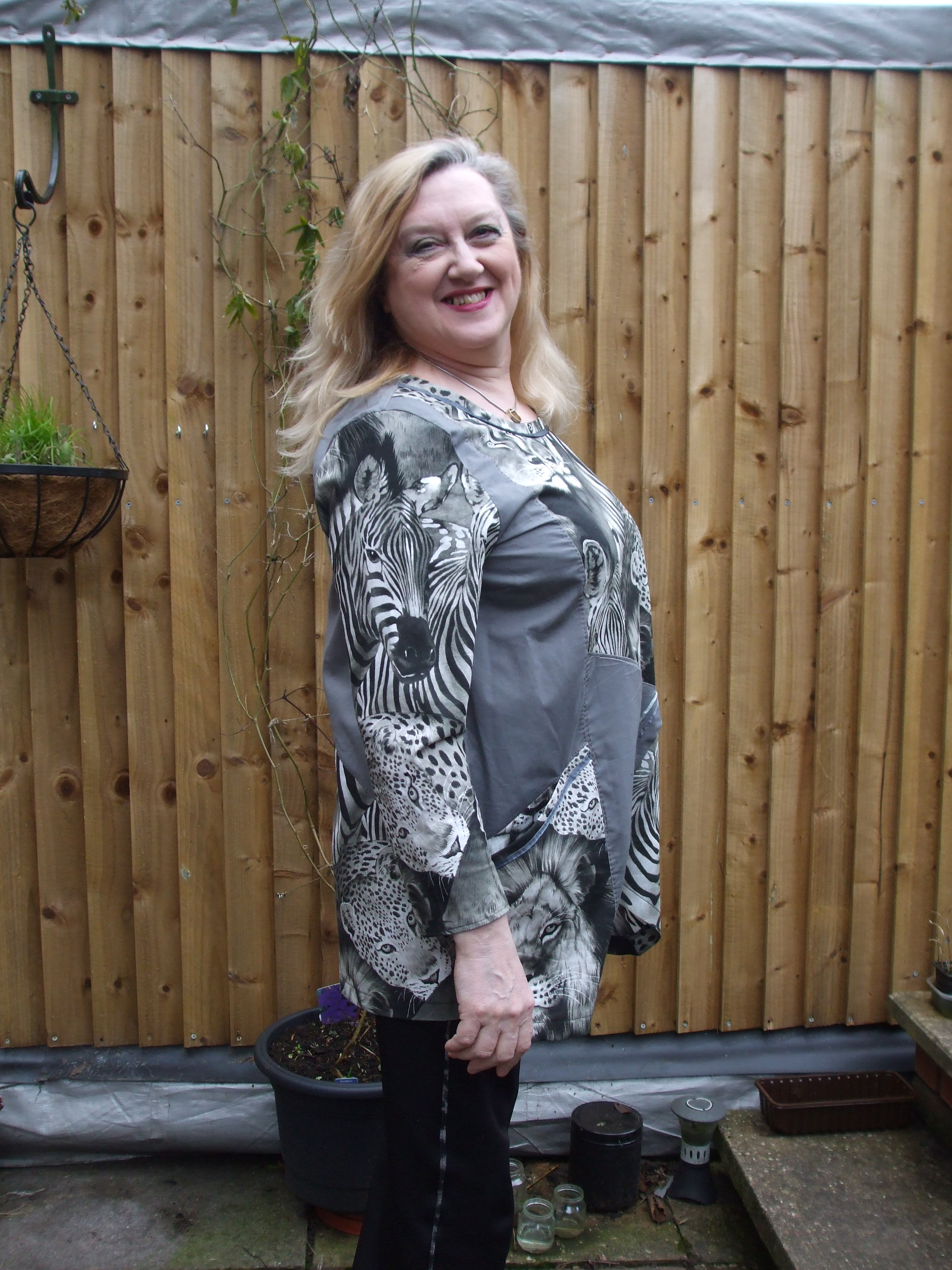 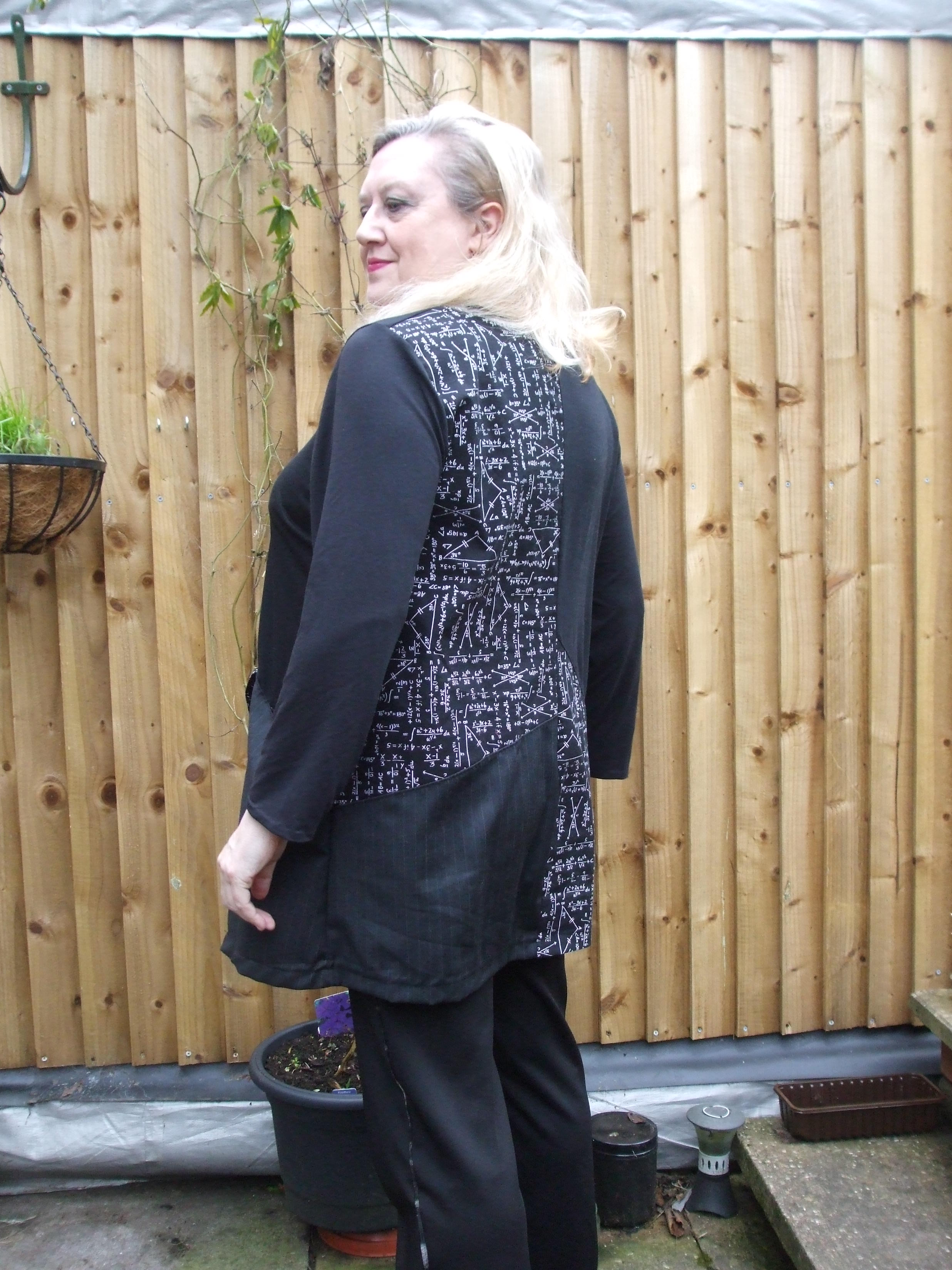 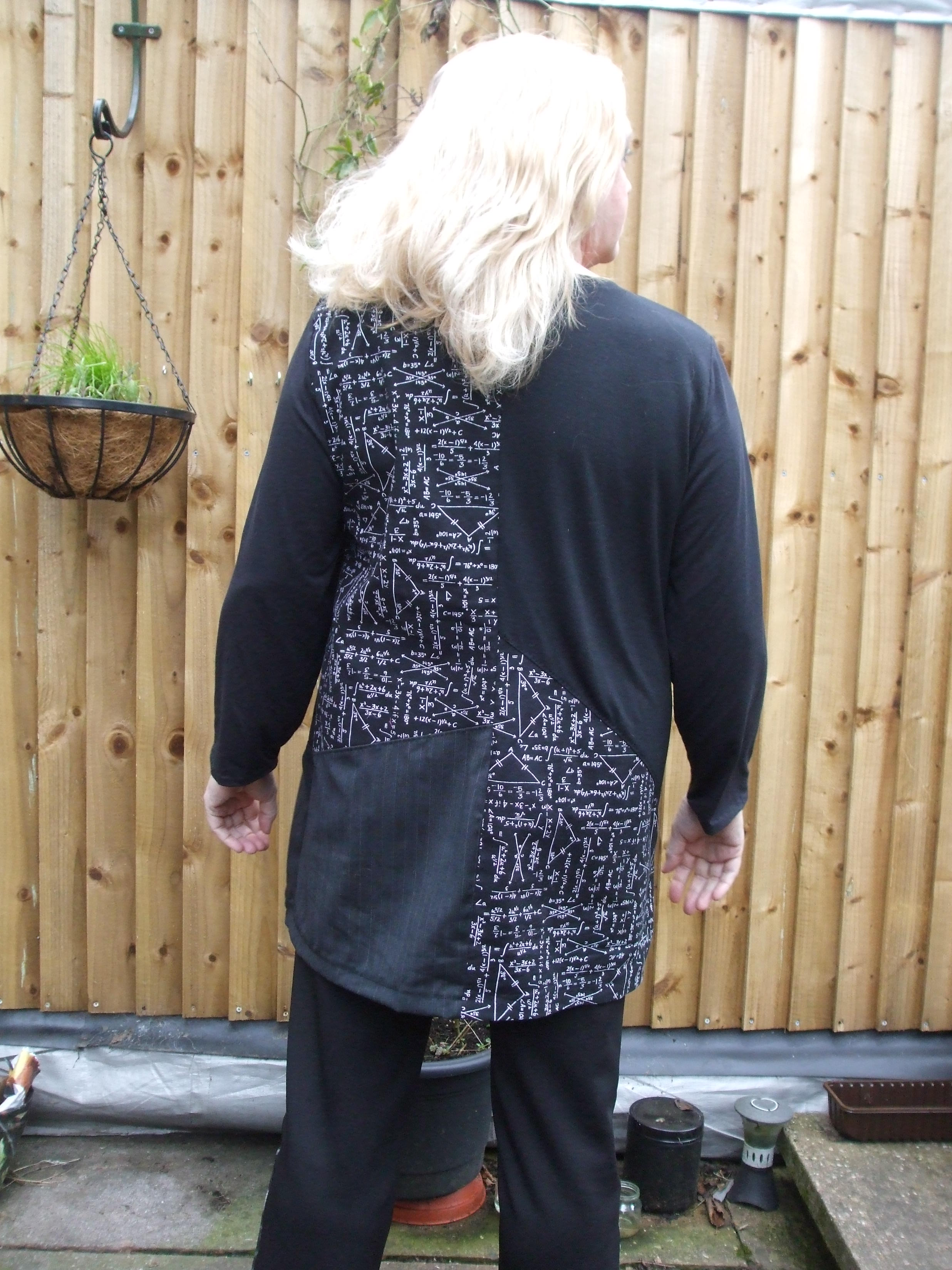 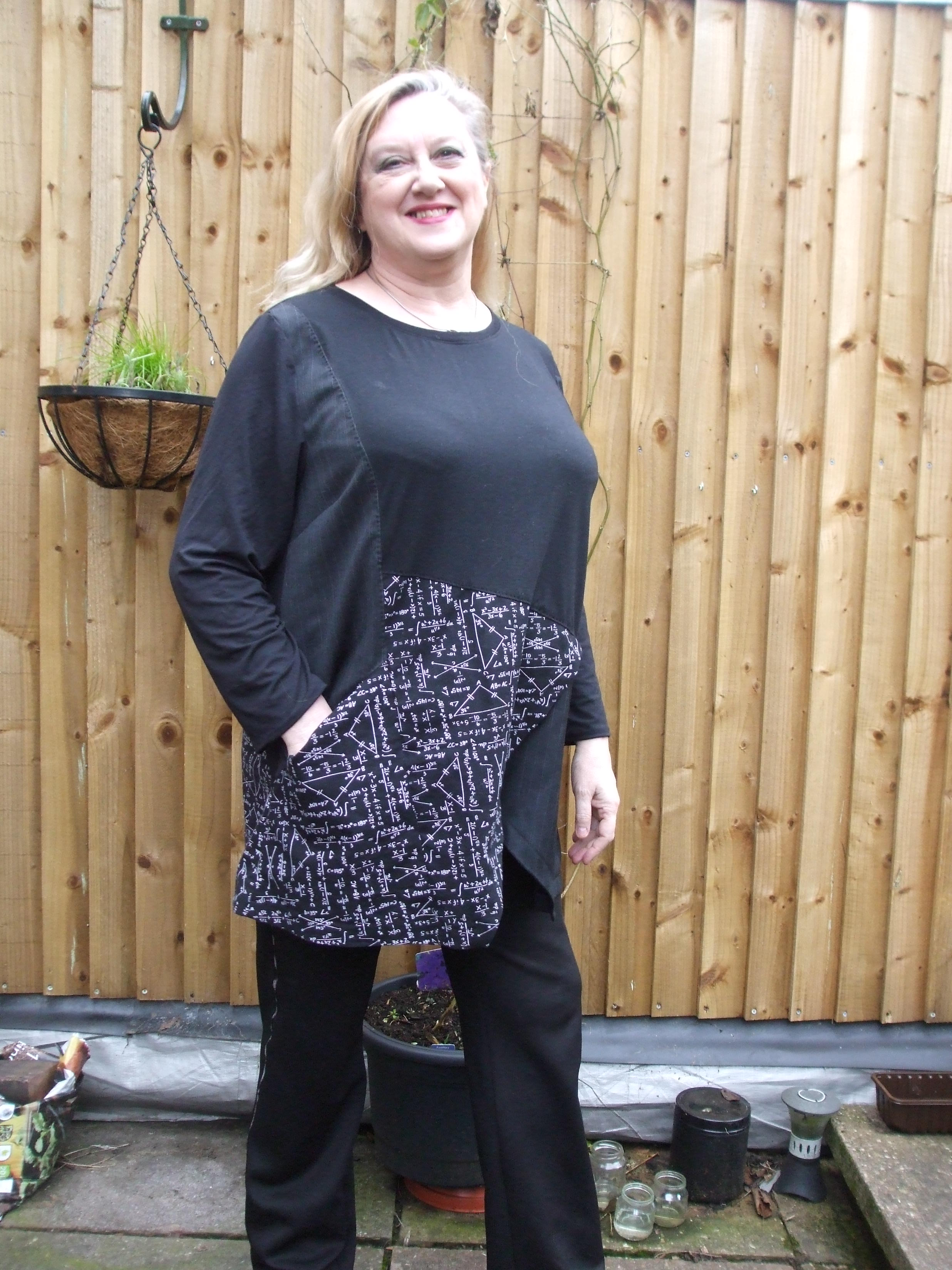 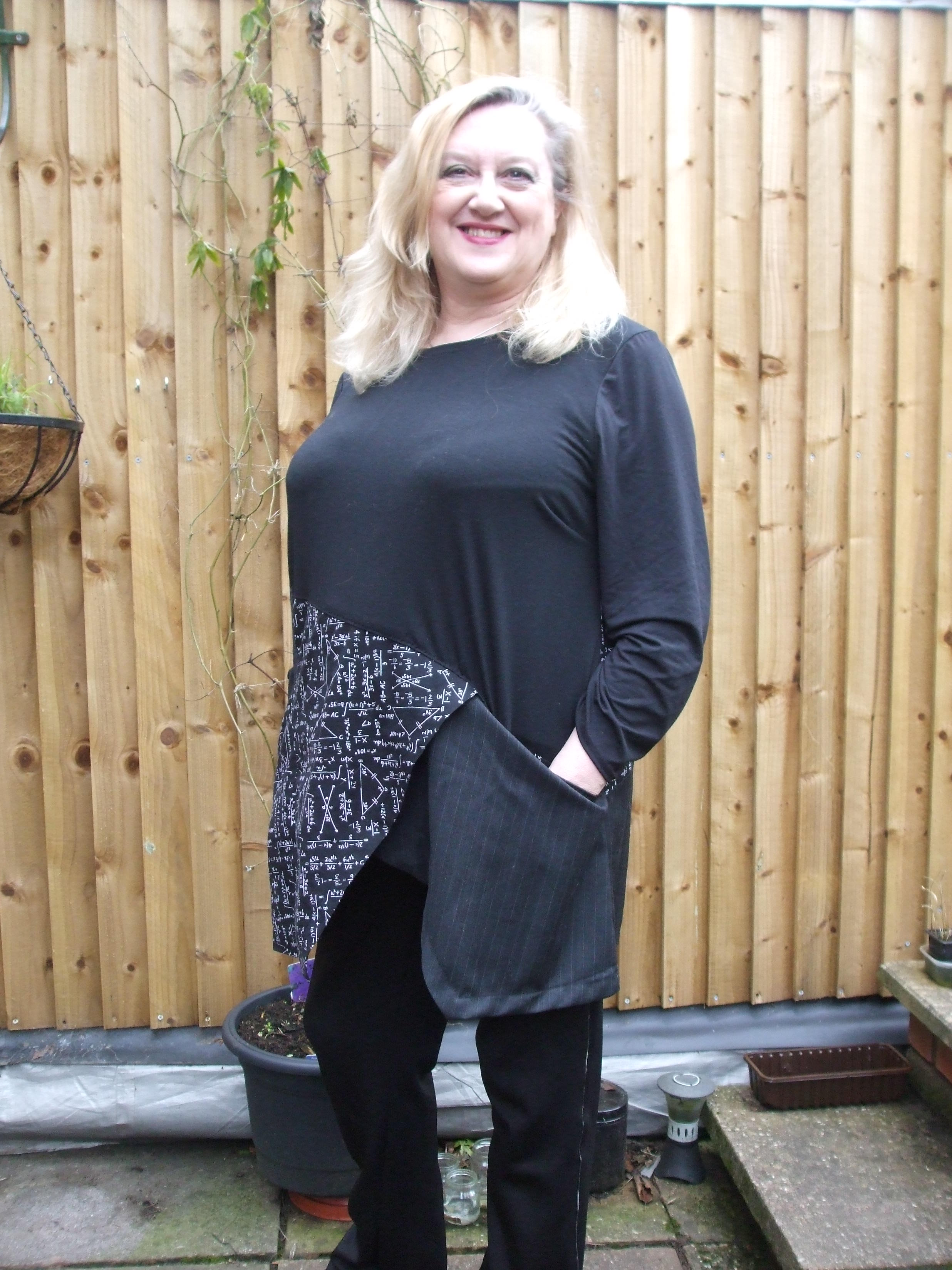 [Excuse the creases, I had to sit and wait for the missus to return from one of her rambles, so I managed to revert to my usual scruffy appearance in no time!]