Okeri-Jokery?  Oh I give up.  The Oki Style ‘Joker’ shirt.

WOW.  Just WOW.  This is one cooooool pattern, so of course, the missus pounced on it right away.  I already had the lovely heavy weight stretch cotton poplin, with white self-stripe that I’d used for my Style Arc ‘Juliet’ shirt #2, and the wife had demanded I immediately buy more and set it by for a crisp white shirt, while she chose a style.  What a match!  All those asymmetric pleats and folds are made even more fab by the stripes that end up going in all directions.

The pattern goes to a size 46, which would normally be slightly too small…but because there is actually so much width already, only suppressed by the pleats, I decided to just go for it, and make some pleats smaller if needed.  Plus the fabric has quite a bit of stretch.

The body pieces are cut out single layer…but watch out for the back piece, which is asymmetric and needs to either be printed twice, or marked, flipped over, and marked again. 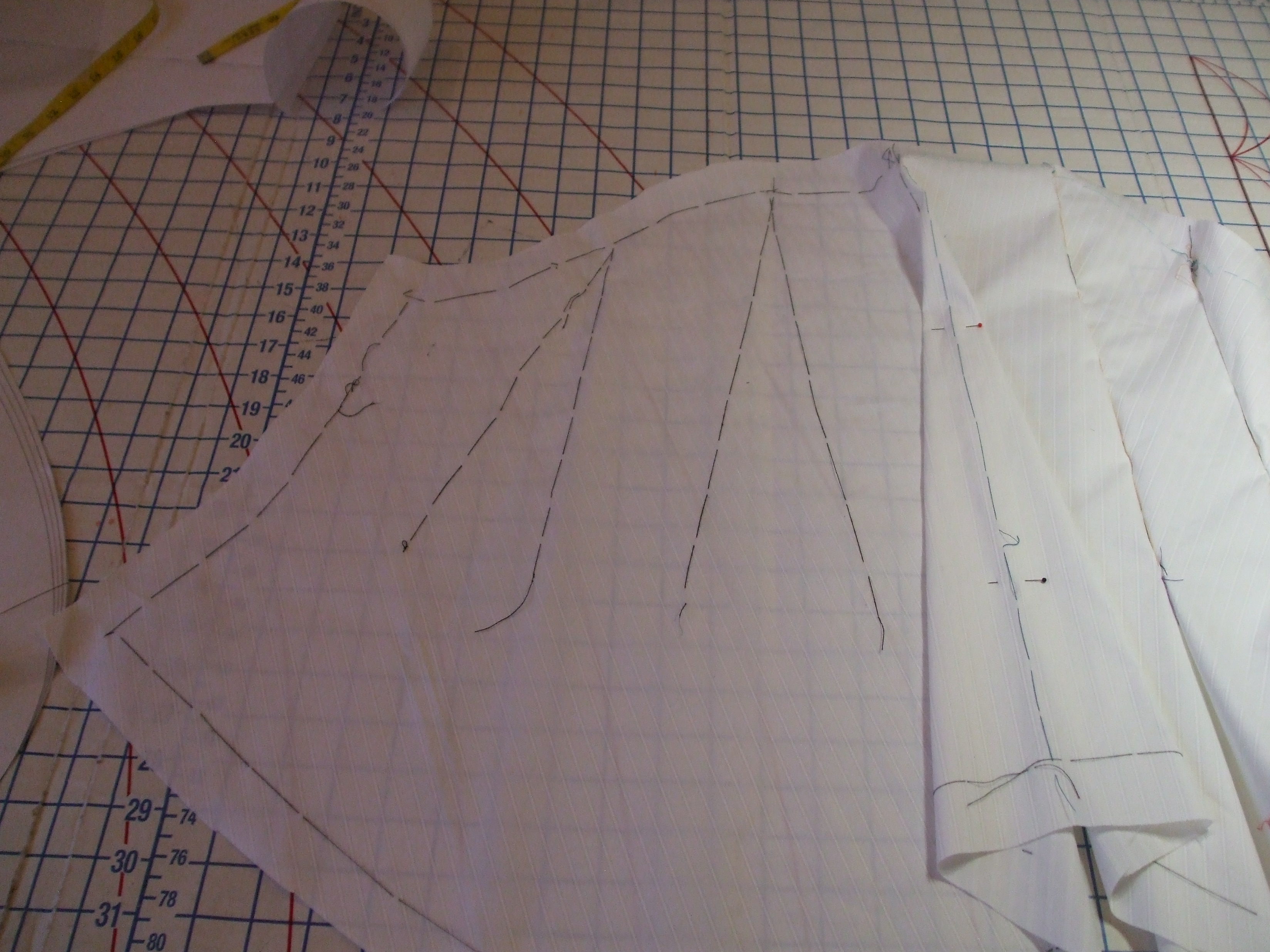 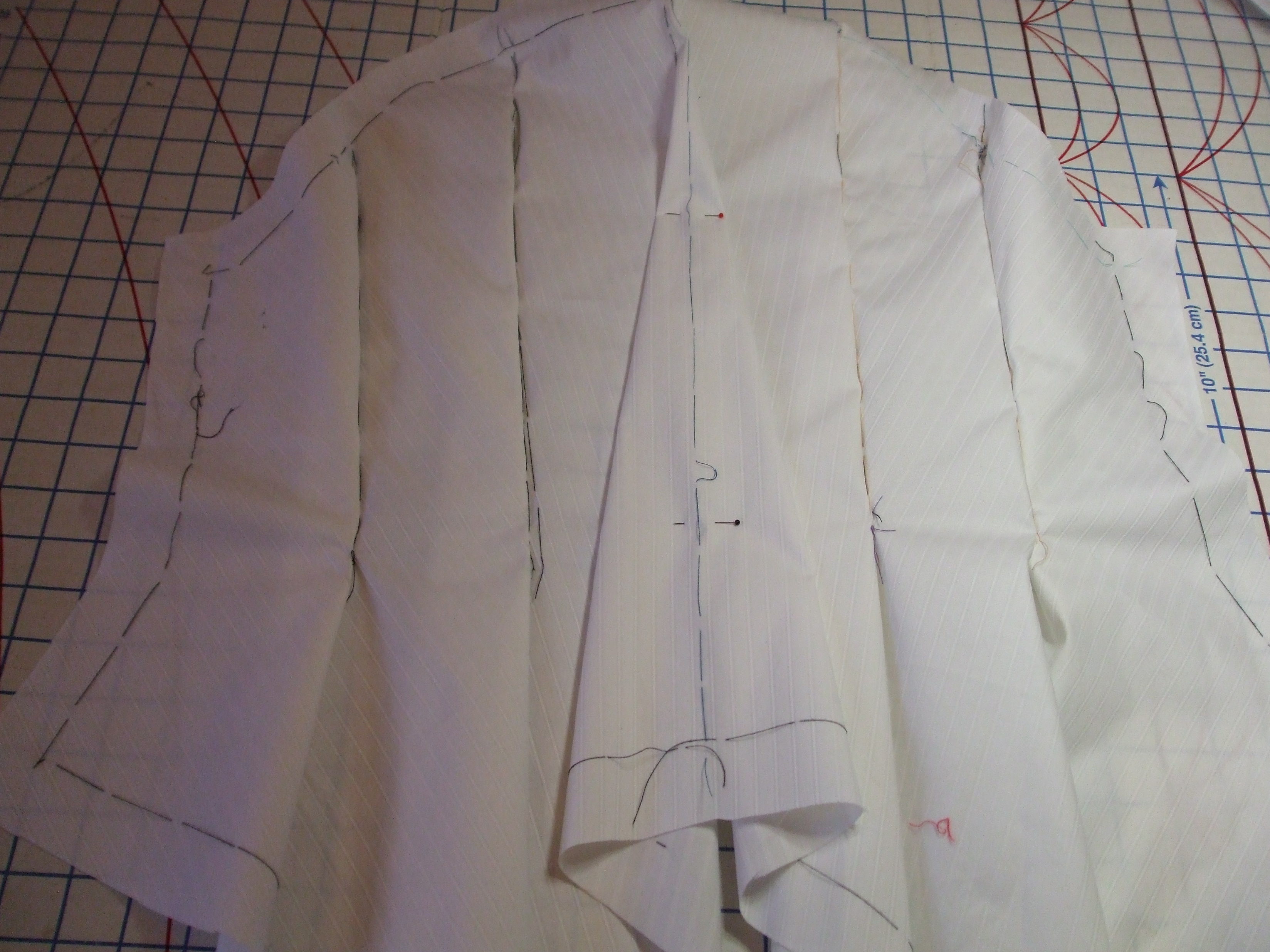 Again, no seam allowances, so I rough cut but thread traced the whole thing.  Yup, all of it.  It proved to be worthwhile with the frilly skirt didn’t it?  It’s the kind of job I can settle to when listening to my audiobook, in a trance-like state!

The yoke-and-back-sleeve piece is cut on the fold, as are the collar pieces [unless you trace them off, whatever makes sense to you.]

It’s beautifully drafted, but the pieces are very oddly shaped so it took me five minutes to suss out how to get the sleeve/yoke assembly together.  Fascinating stuff!  Seams are neatened on the overlocker and topstitched.  I would have gone for felled seams but the fabric is quite thick, and many of the seams are very curved so I dodged bulk! 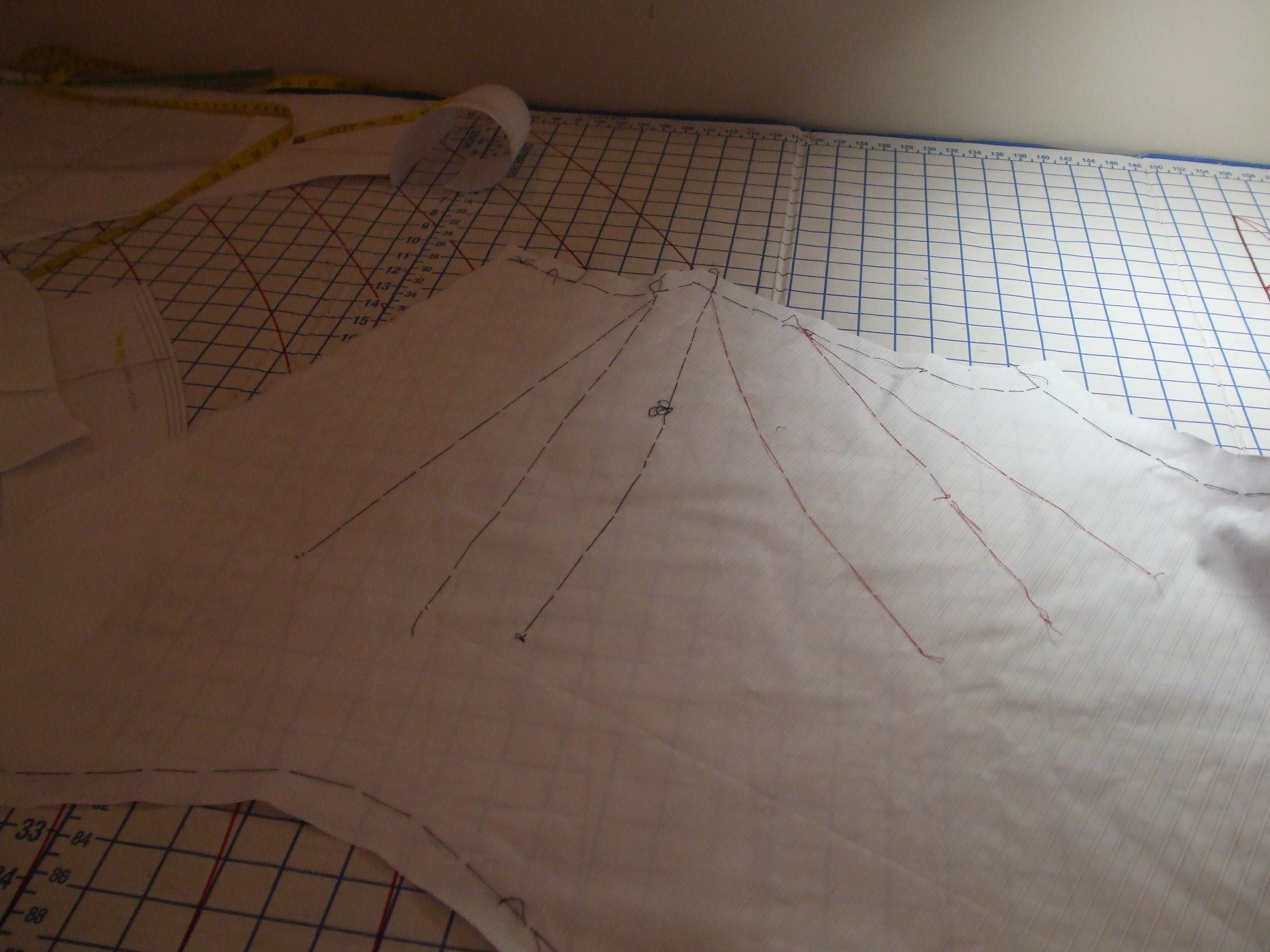 It fits perfectly, I just needed to shorten the sleeves by the usual 2″ because of the wife’s velociraptor arms.  She wanted the two side front darts lengthened by a couple of inches to bring the flare in a little, but apart from that, it’s entirely as drafted. 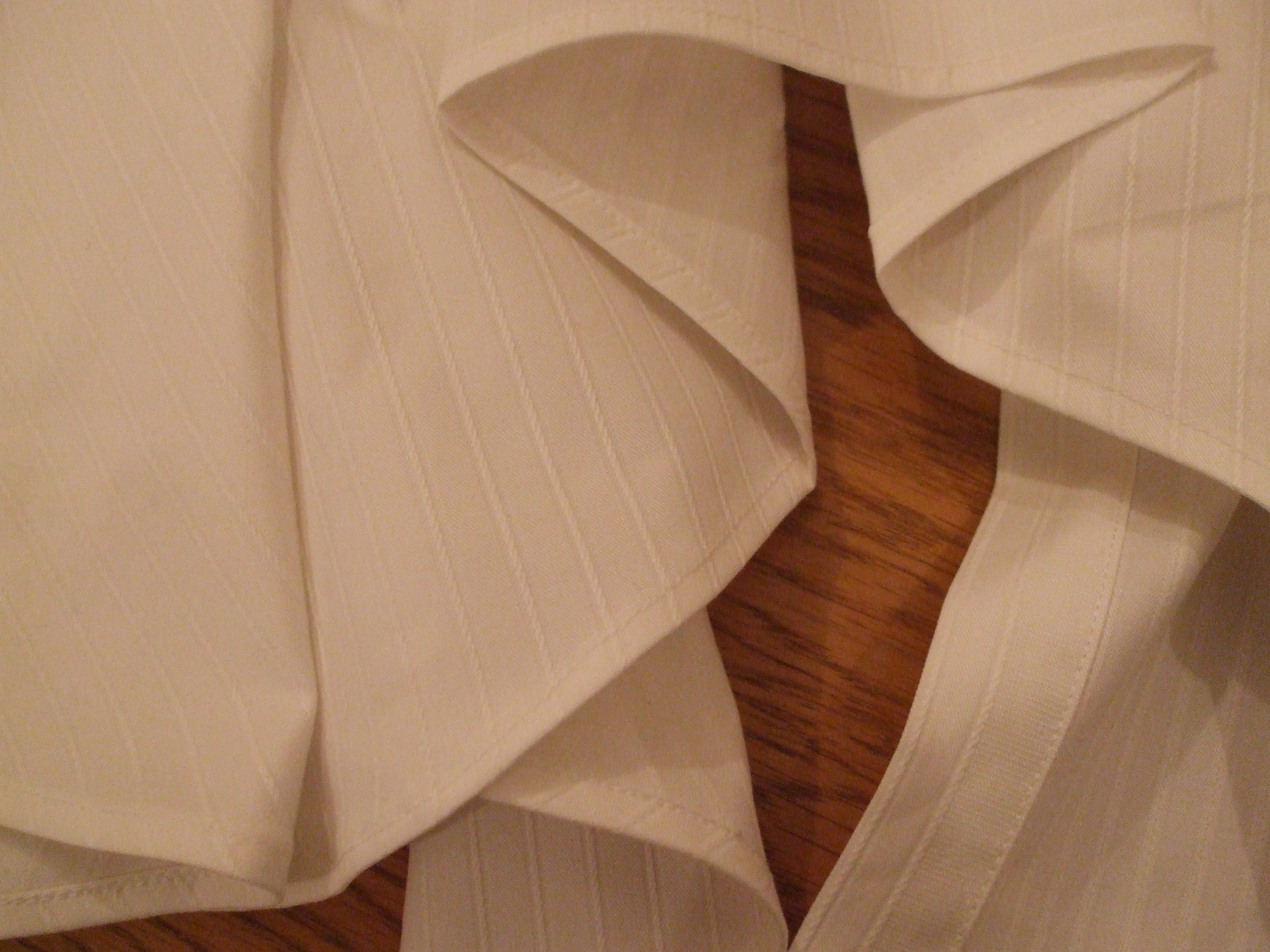 One issue- the button and buttonhole sides are reversed to what you would normally expect.  I was so distracted by the oddly shaped pieces I didn’t notice this until it was almost entirely assembled.  I could I suppose make sewn on stands, but couldn’t be bothered, so it fastens ‘backwards’.  No big deal.  I found these cute little square buttons in stash, which go nicely with the whole angles and curves feel of the shirt.  Nice! 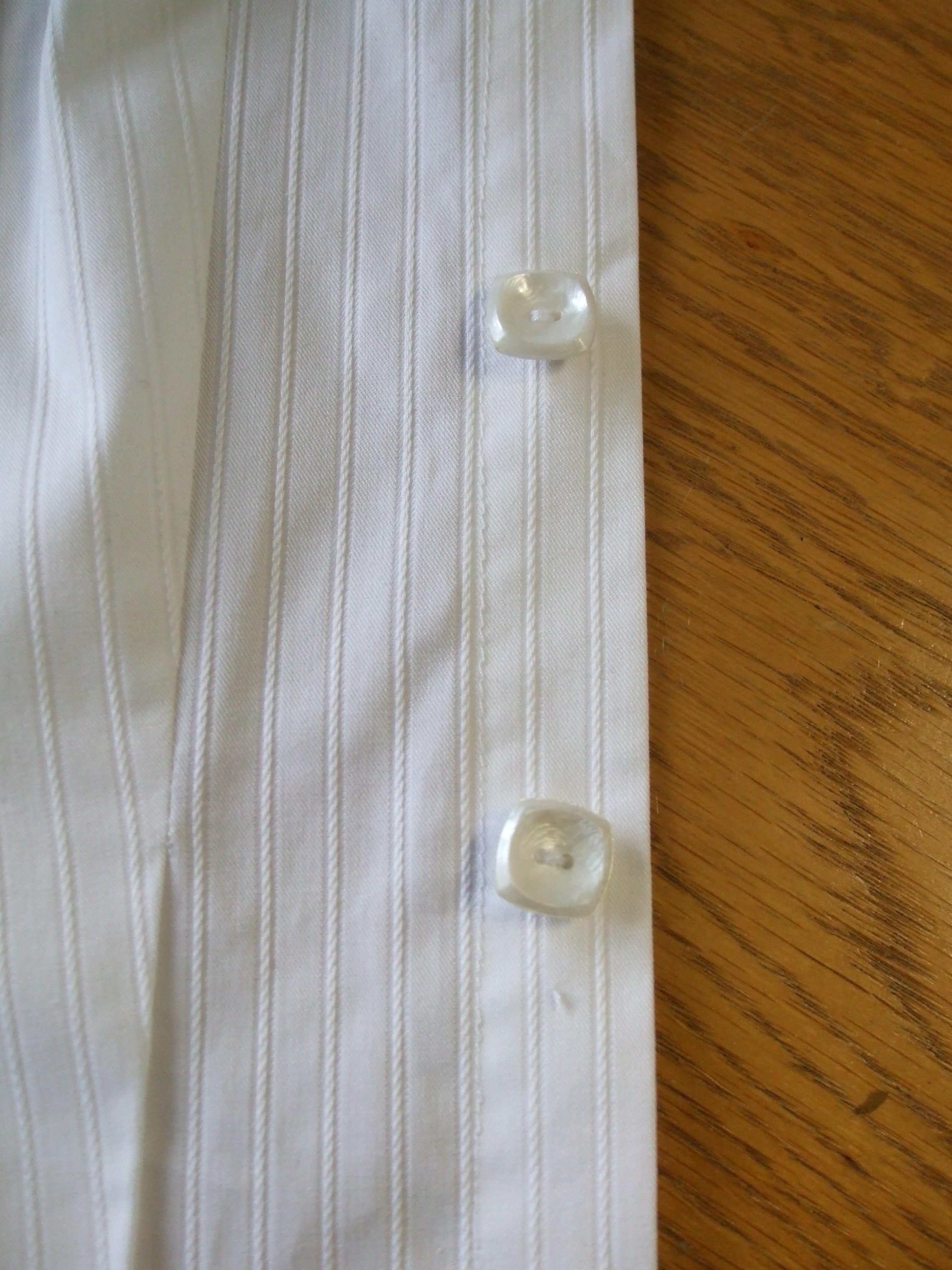 I did a little extra sewing inside to control those darts- the middle ones on each of the fronts is VERY wide, and is inclined to fold back on itself or bunch up, so I did some jiggery pokery, took inspiration from corsetry, and put in a waist tape, using a piece of bias tape which happened to be the exact length I needed. 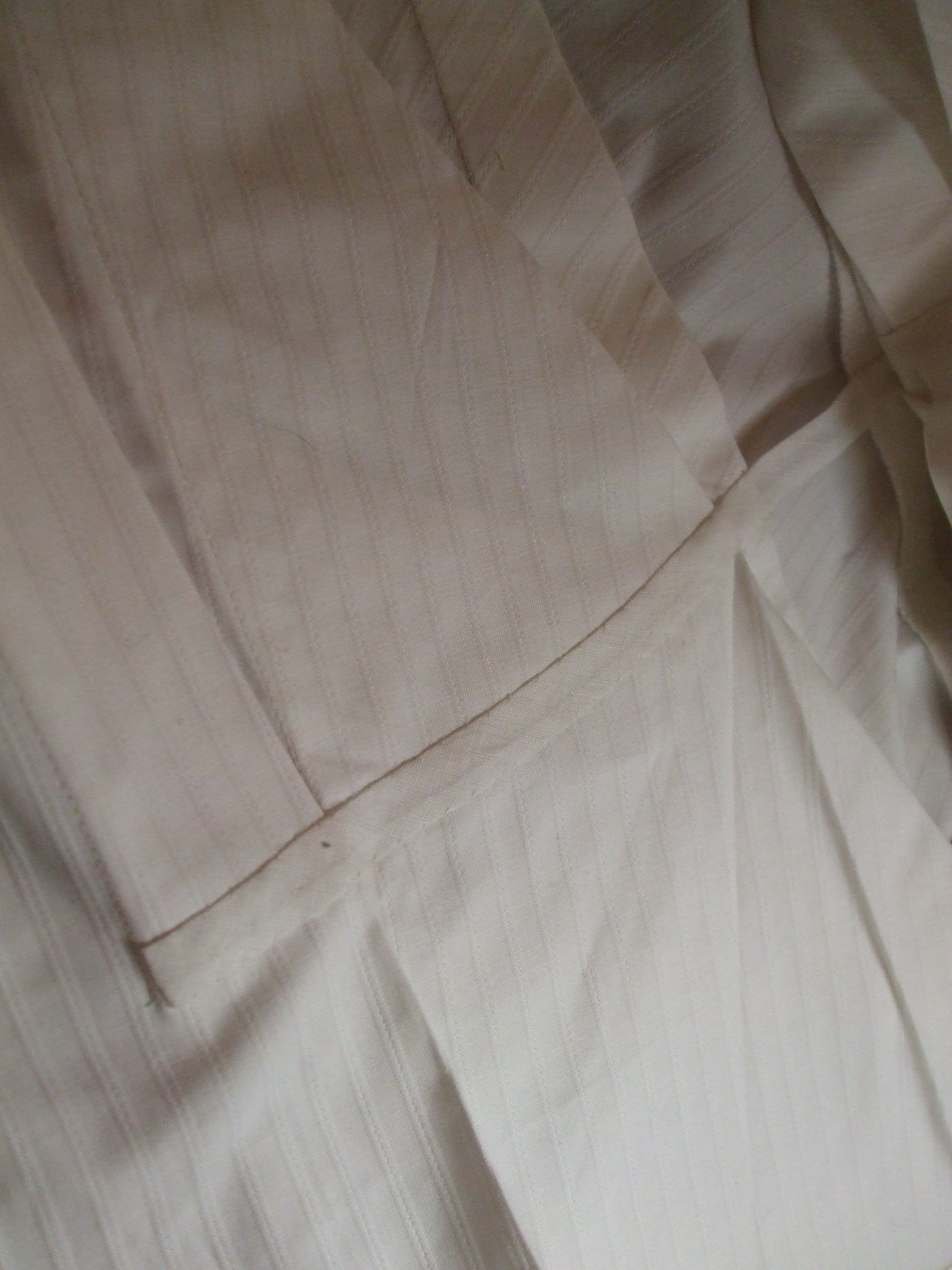 Wifelet had wanted cuffs, but then we decided that the fabric has enough body to give the required effect, and the sleeves aren’t as full as she first thought.  SO a nice wide 1.5″ hem, and that was sorted.  She can roll them up if she likes, they have some oomph. 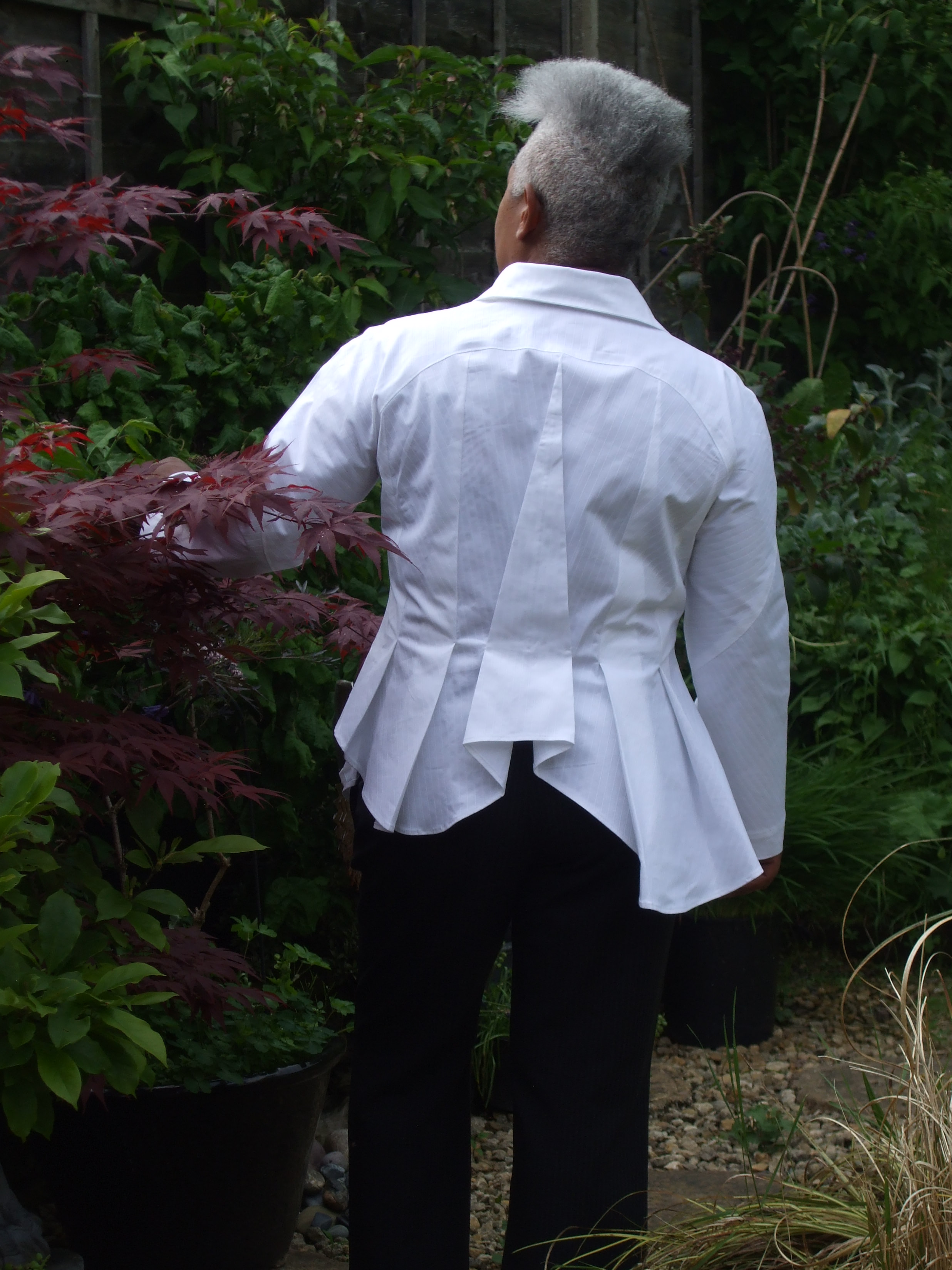 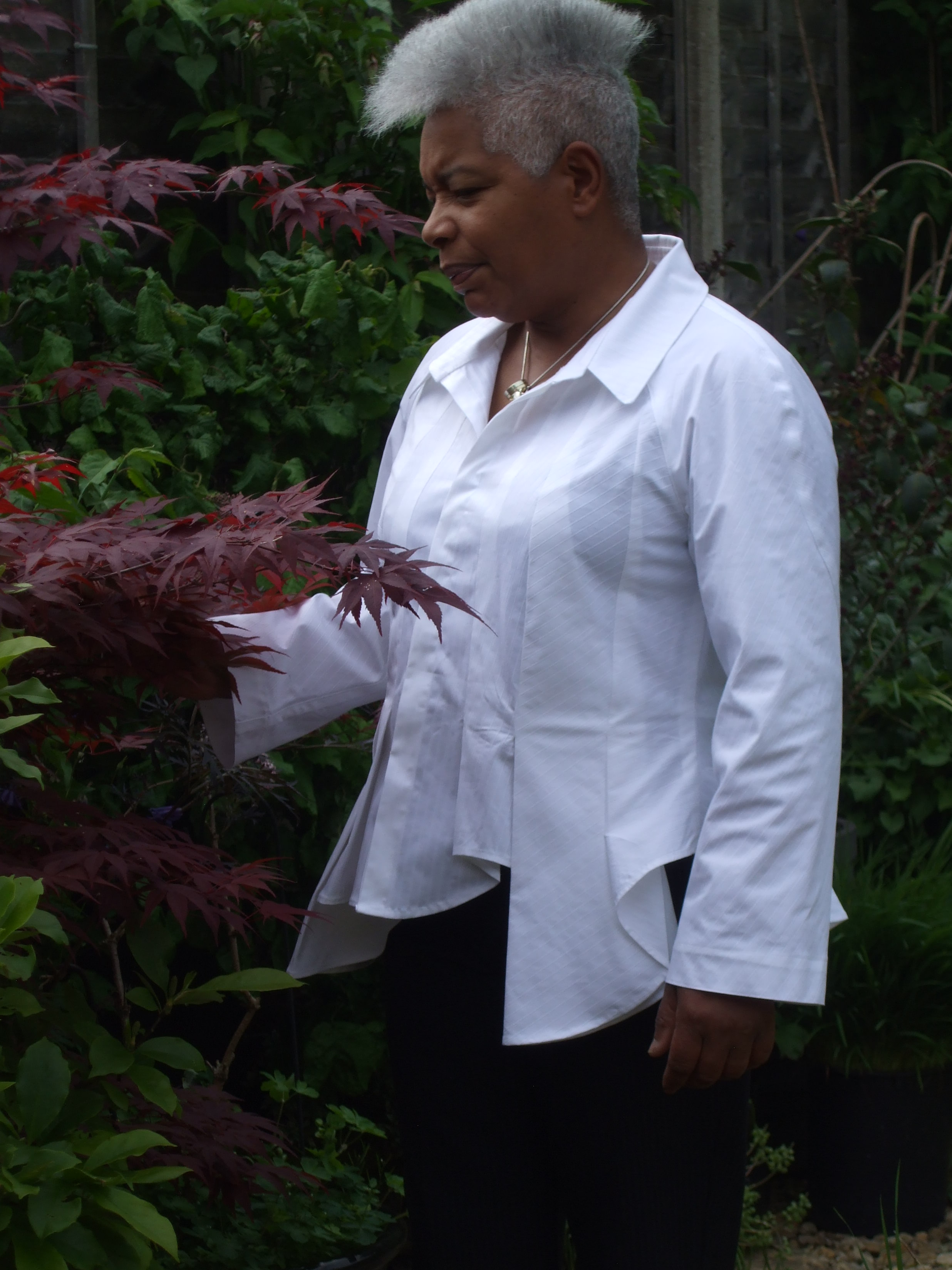 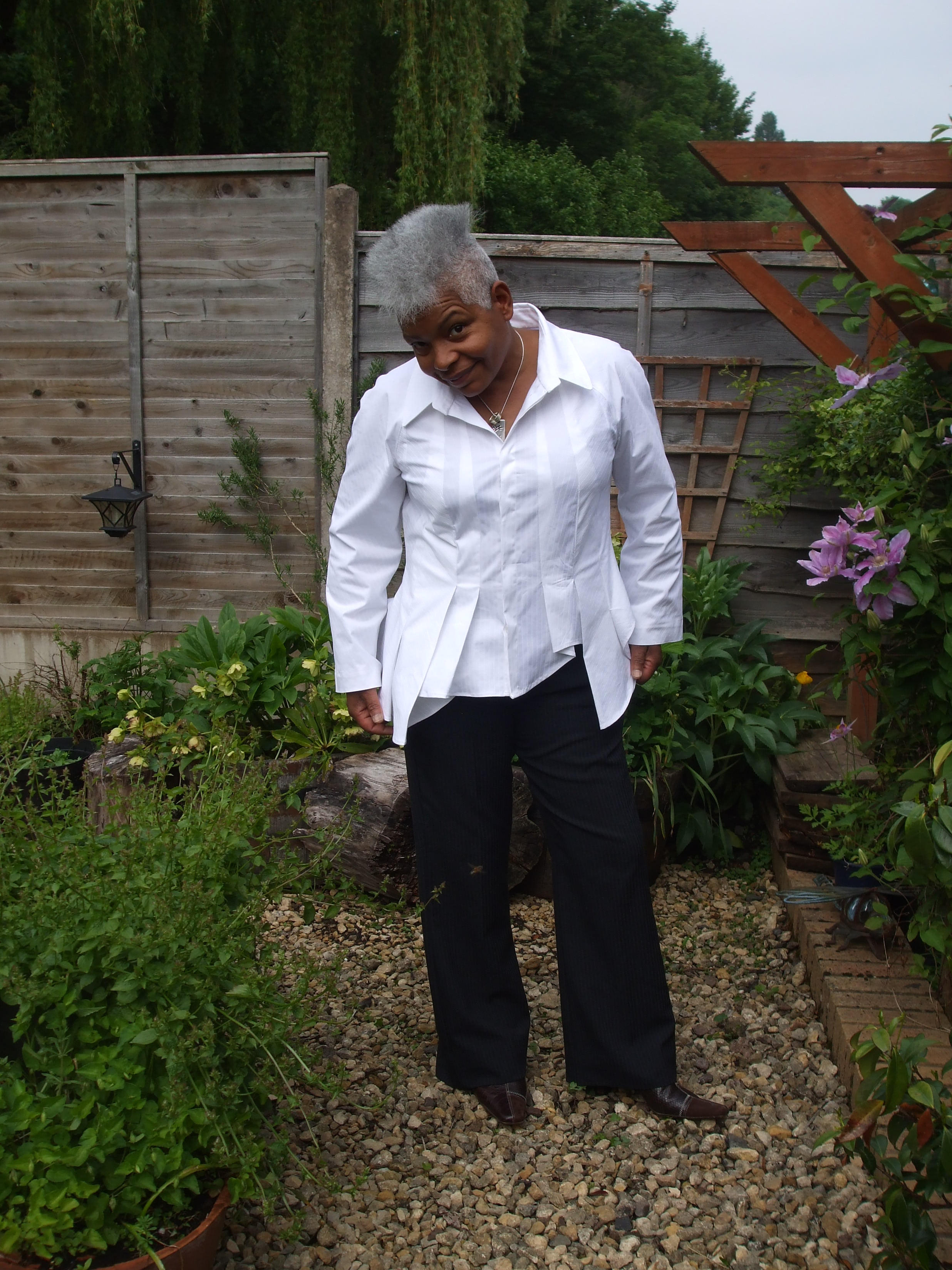 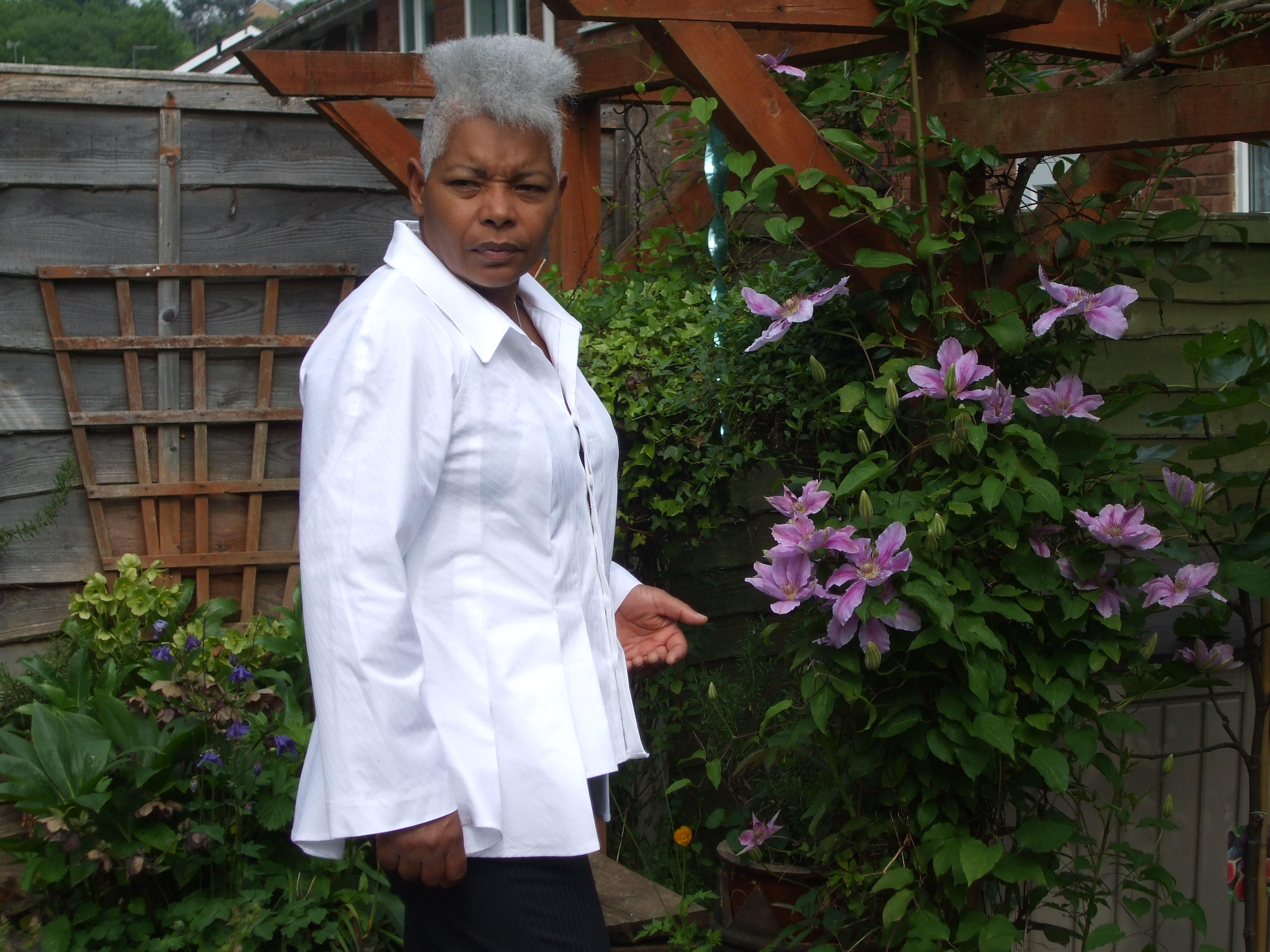 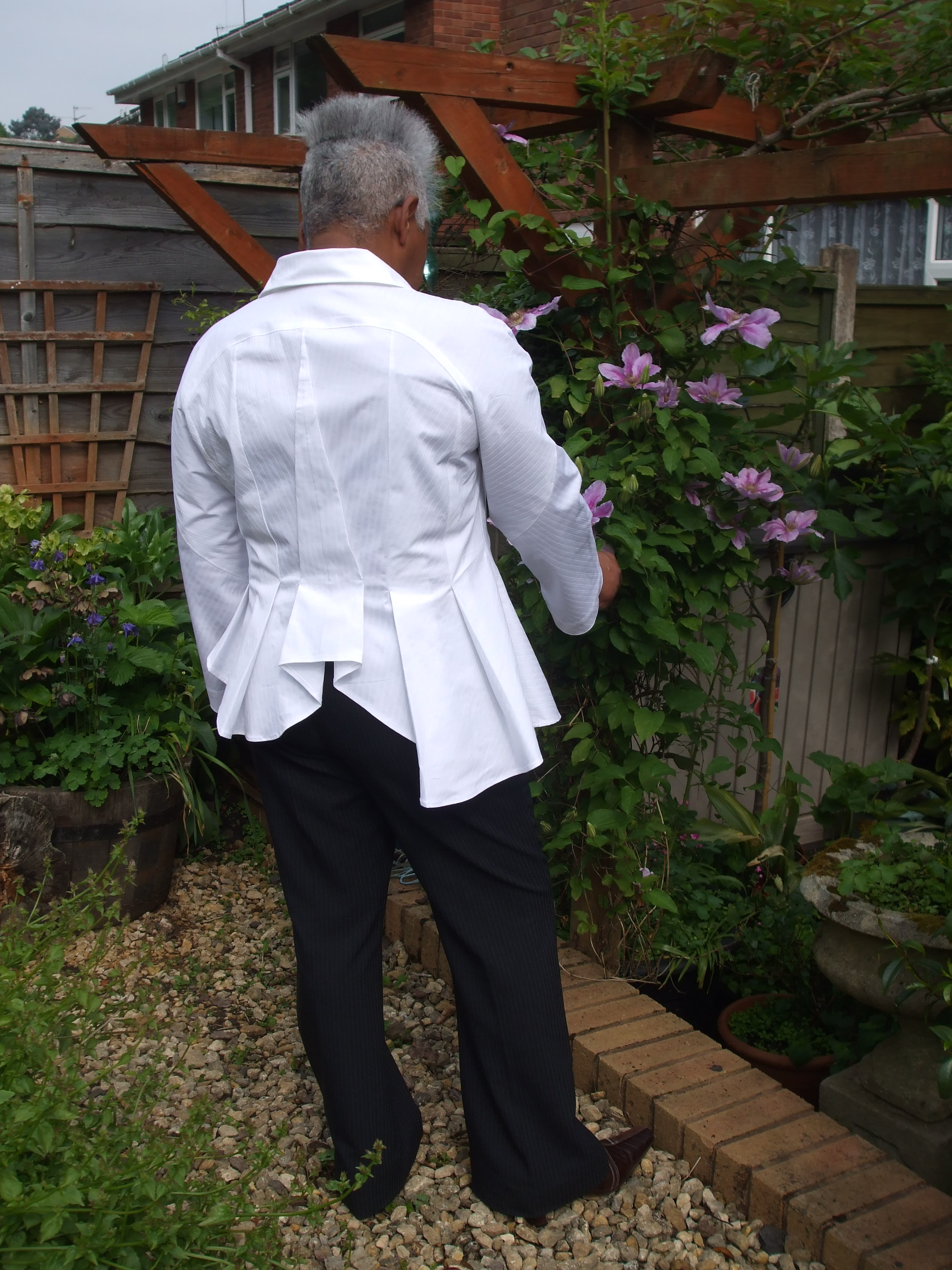