I have been nominated by the lovely [and wonderfully bonkers] Kim,  The Material Lady

Thanks missus [and we need to arrange a playdate SOON]…be warned folks, this is a LOOONG post.

“Mystery Blogger Award is an award for amazing bloggers with ingenious posts. Their blog not only captivates; it inspires and motivates. They are one of the best out there, and they deserve every recognition they get. This award is also for bloggers who find fun and inspiration in blogging, and they do it with so much love and passion.” Created by: Okoto Enigma

Here are “The Rules” to the “Mystery Blogger Award”:

OK then, I need a break from marking before my brain turns to algebraic mush, so here goes.

Three things about me [that are not in my intro post]

Thing the First:  Why I am not roadworthy

I once had a motorbike, a BSA Bantam, lovely little thing, and had some riding lessons from my then-husband.

I also went to ONE proper lesson, where I felt so intimidated, wobbly, useless, and terrified of all the bloody cones, that I bottled out.

The final straw came on a day when, while my ex and his mate were fixing something bikey at the back of my mum’s house [we didn’t have a garage at the time], I was ordered to build some balance and confidence by pootling up and down the access drive.  Too uncoordinated to actually turn the bike at the bottom of the slope, I just sort of waddled it round before pootling back up again.  Ad infinitum.  I got more confident, which immediately led to disaster.

I ‘blipped’ the throttle AND wobbled at the same time, and rocketed straight through the side fence of someone’s house, landing completely vertical, with the back wheel down a little dip and the front wheel up the wall of the house.  I stayed on the seat, bellowing for help, as the fence pieces showered down around me.

The blokes, true to type, ran round the corner then stood bent double with laughter, howling at my plight.  It was a while before they lifted me out.  And that was the last time I ever rode a bike, other than as a girly pillion.  Oh, the shame!  [And we never owned up to smashing the fence either, disgraceful]

I lived next door to her mum for 25 years, so we met many times as she moved in and out over that time, but we hooked up for real following another of my ‘good grief are you really that clumsy’ moments. The ex had moved out at last, and I was feeling GOOD.  Bounced home from work, and as it was ‘bin night’ did my usual tour of the house, emptying waste paper bins into a bin bag.  I emptied the one by the loo, and toe-poked it back into place…a little too enthusiastically.

The whole house was made of ‘spittle and twigs’ as my eldest always said, as both my FIL and ex were pretty incompetent [and tight] with any DIY.  A pipe at the back of the cistern came off, and water started to shoot out at me.  I shrieked, in appropriate girly fashion, and grabbed loads of towels from the airing cupboard to staunch the mess.  I did try to fiddle in the cistern to try to reduce the flow, but failed.  I HAD NO CLUE WHERE THE STOPCOCK WAS despite living there for so long.  The shame!

Many panicked phone calls ensued, asking my dad,  various male workmates etc, where the thing might be.  NO it wasn’t under the sink.  No one could help.  The ex staunchly refused to answer his phone or any panicked texts. £$%^&*!!!  I called several plumbers, and eventually found one who said he could come over…but then he got stuck in traffic.

In a total flap [because by now the water was p***ing through the kitchen ceiling and the lightbulb had exploded] I thought to ring the next door neighbour, as their house was the mirror image of ours, so I thought they might be able to help me.  Future-FIL, was sent round to help.  The next bit was like a sitcom [or farce], as we hunted around looking for the bloody stopcock.  Please picture this:  me in smart work clothes, soaking wet, FIL-to-be [very Jamaican, think Desmond’s] muttering and fussing about.

I suddenly had a lightbulb [non-exploded] moment, and remembered when the ex had put the washing machine in years before.  The whole kitchen had to be dismantled as the required plumbing had lurked in a dark corner of the kitchen, beneath a work surface where the microwave lived.  We dismantled said work surface [I used the ‘Brummie Screwdriver’- a hammer]  Lo!  A stopcock!

FIL-to-be, a tiny man, now had to dangle over the base units, to try to get at the bloody thing.  It was, of course, rusted solid.  Much cussing and swearing ensued.  The whole time, water is piddling through the light fitting, we are both drenched.  The kitchen is several inches deep in water, and it’s flowing into the dining room.  I continue to wad towels and bedding everywhere possible to stem the flood.

Finally success.  At this point, the plumber arrived, as did the ex, and the wife-to-be came to collect her dad.  Apparently, [she told me later] my nice smart work clothes were by now somewhat transparent.  Ahem.

The next day, we went for our first date, and that was that!

Before I had my first hip-op,  I suffered from bulging discs, and frequent back pain.  When the second one went, shortly after I got out of bed one morning, I honestly thought I’d had  a stroke or something, as I just collapsed to the floor, then had no sensation all down my right leg.  By the time I found out what had happened, I had suffered permanent nerve damage in that leg.  Nothing serious, but for a while I was walking with a stick as I felt very unsteady.

Another bin night, and out I hobbled to drop a couple of wine bottles into the re-cycling bin.  My leg folded under me, and me, stick, and wine bottles rolled down the rather steep front drive, across the pavement [told you it was steep] and into the bloody gutter.  The bottles made one helluva din of course.

And there I lay.  I couldn’t work out how to get myself upright, and there was no one around to help me out.  I must have looked like a right drunkard.  I promise, for once, I was stone cold sober!  Eventually I managed to get onto my knees, and crawled to a tree to get myself on my feet again, before hobbling back up to the house. 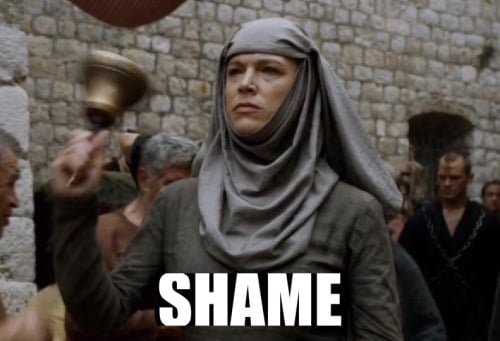 I read a lot, and have way too many favourites, but my current fave author is Joe Abercrombie.  I also love Octavia Butler and Neal Asher.

Ice cream- meh, not much fussed.  I prefer sorbet.

I listen to audiobooks when sewing, the longer the better, sop Joe Abercrombie and Stephen King feature large!  Anything narrated by Stephen Pacey is brilliant though.

Karaoke- not on your nelly, my voice is not fit for public exposure, although I will shriek along with anything in the car.

And now for my 5 questions:

A Damsel in this Dress

And BREATHE.  Done!  Thanks Kim, that was a hoot!

Marking is getting near the end, so normal service should resume very soon!

Nice dress! Thanks, I made it!!

Addicted to sewing since the 70’s – Sewing Blogger since 2013 – Enjoying a #RTWFAST and Creator of #DESIGNINDECEMBER since 2015 – Designing Handbags and Accessories and PDF Sewing Patterns for bags and accessories at #LANYOSHANDMADE since 2018 – Lover of vegan, sustainable, repurposed and up-cycled projects – I want to try everything, learn everything and talk about it with you!