The final appointment, which took time to arrange as the bridal party were all busy at different times, and chief bridesmaid needed to come so she could see how to get Ele in and out of the dress, and how to manage the bustle and arrange the train for pics etc.  She admitted she’s an airhead and would need coaching lol

I spent many, many hours positioning and stitching those motifs on.  The three complete ones on the back of the train were sewn through all layers, tulle and dress, to try to stabilise the miles of outrageous tulle that had accumulated by now, all flowing in different directions.

I had to keep smoothing the thing out, trying to make sure the tulle layers hadn’t shifted to one side or the other [but of course it did several times, and I had to unpick or smoosh.  Shhh!]

I toyed with cutting out the black backing from the middle of the motifs, but I’d long since lost the will. 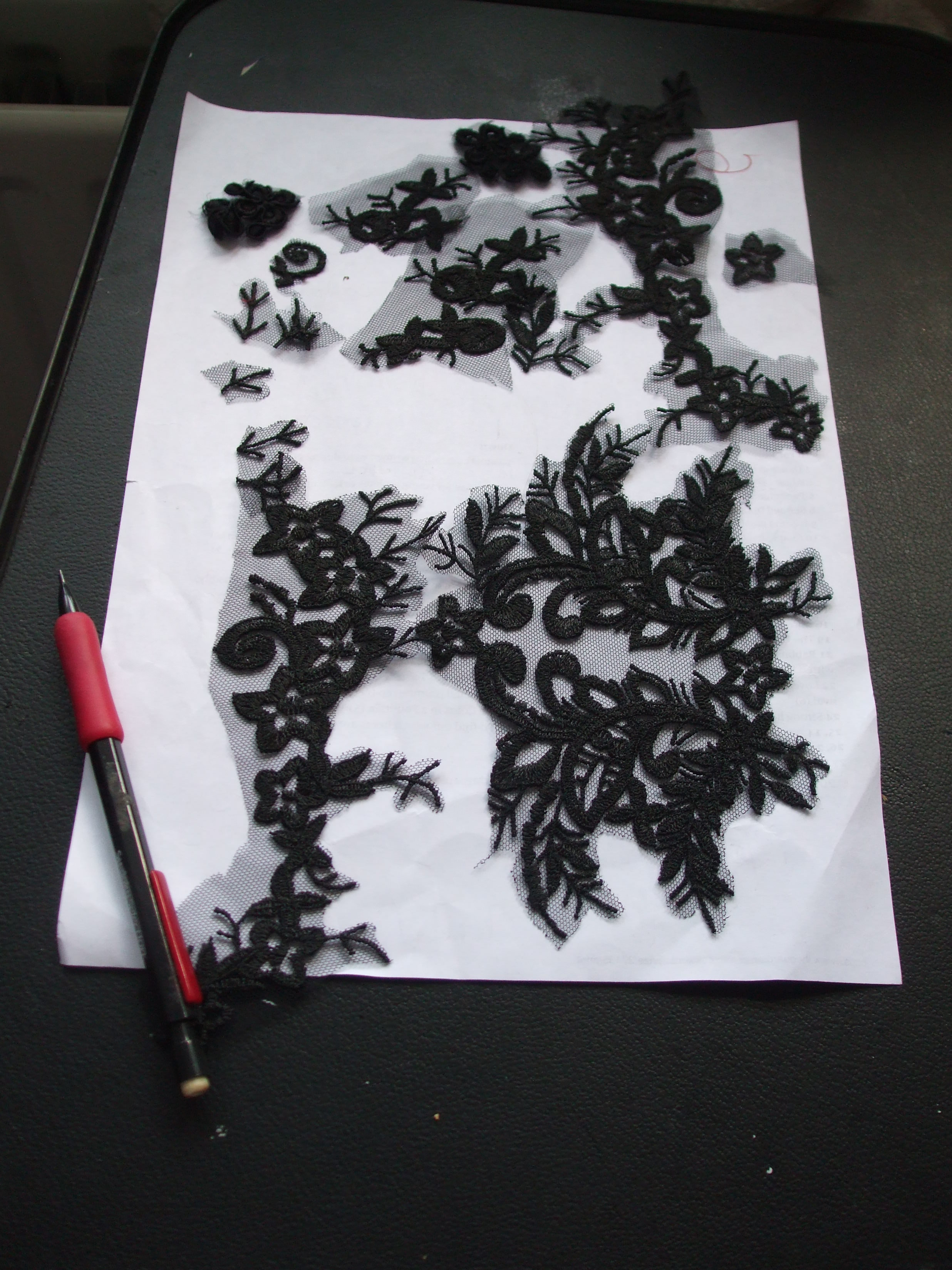 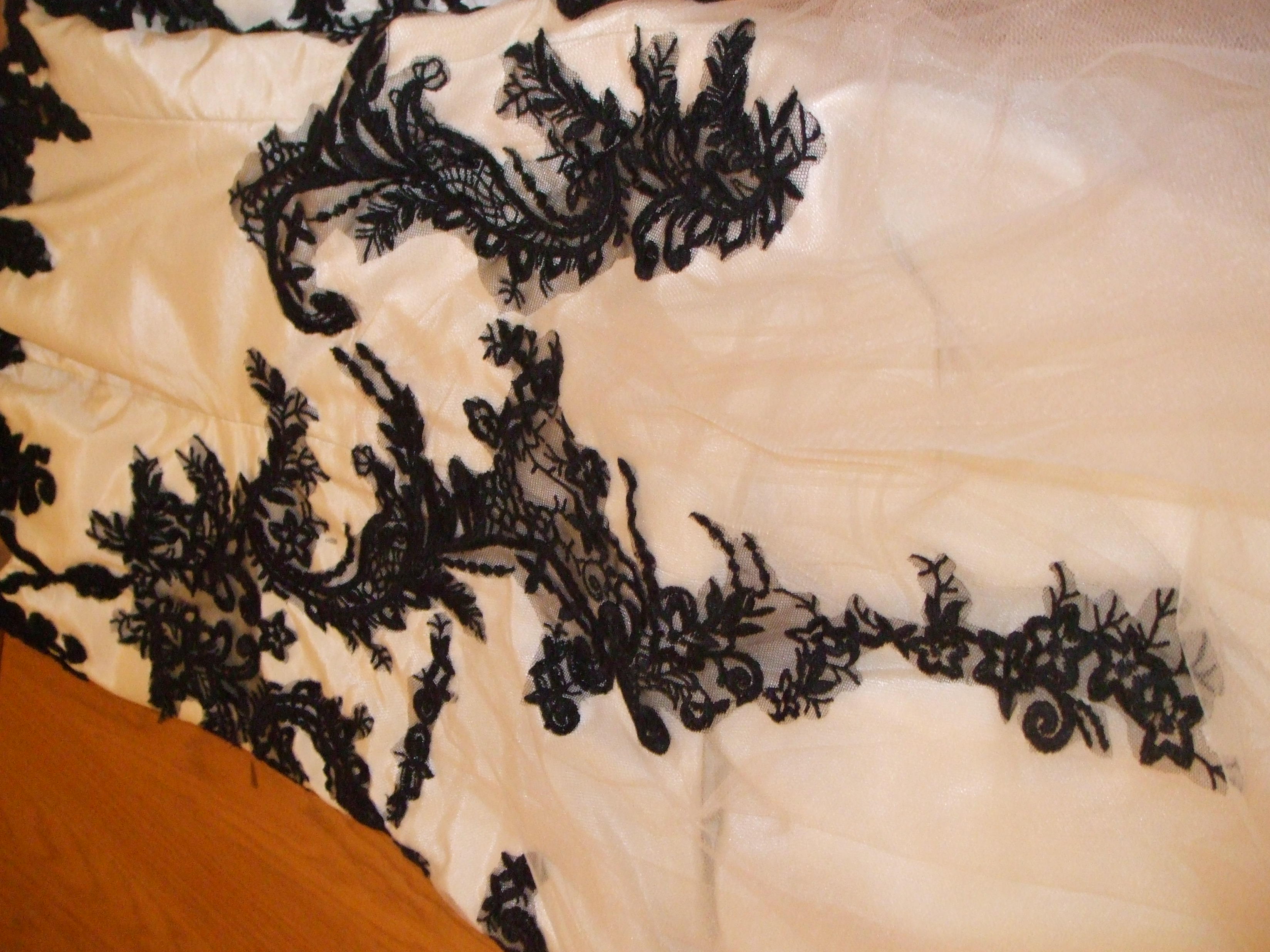 I threaded 12-13 needles at a time, waxed the thread, and slogged on.  Thank gawd for my desktop needle threader, and silicon/steel thimbles.  One died, I had to get another lol.

Oddly, I can’t find any pics of the hem, and I was very proud of that.  I used a 3.5″ wide bias facing cut from the curtain lining, steamed and pressed it into a nice curve, then machined it to the hem edge, understitched, and then herringbone stitched it to the underlining.  There were just a few small wrinkles to be eased flat [smooshed] as I went.  It look good, and strengthened the hem edge for a nice finish.

After all that was finally done, I put the lining in.  It had been sewn up and ready for ages.  I hand stitched it in at the top of the bodice, and down the zip opening, wrestling, as usual, with my stupidity in putting the underbodice between dress and lining.  Doh.  I have to leave the lining unattached so the underbodice hook and eye tape slides out through a gap lol.  the shame.

I then has to hem the lining to the faced hemline, leaving the facing exposed for a good 2-3″ to act as a dust guard.  I re-attached the hanging ribbons that had until this point just been pinned in place. Nearly done!

So.  The last appointment, placing the motifs was on May 20th, we got back together on June 16th.

Ele got into the dress again, I demonstrated to the bridesmaid how to deal with all the fastenings, and then I crawled round and round the floor, trimmed tulle.  And trimmed.  And trimmed.  Far from neatly, I just couldn’t tame the stuff, but at least they were all present to see how evil the stuff was…I left them to trim off any ragged bits they saw later!

We settled on the bustle points.  Sorry Mrs Mole, I’m not a perfectionist, so we settled for three internal tied bustle points, and any tulle that escaped got smooshed.  Yes, shoot me lol.  I trotted off to quickly stitch them all in, and back on again to test the ties for strength, and to make bridesmaid tackle the fastenings, on and off again! 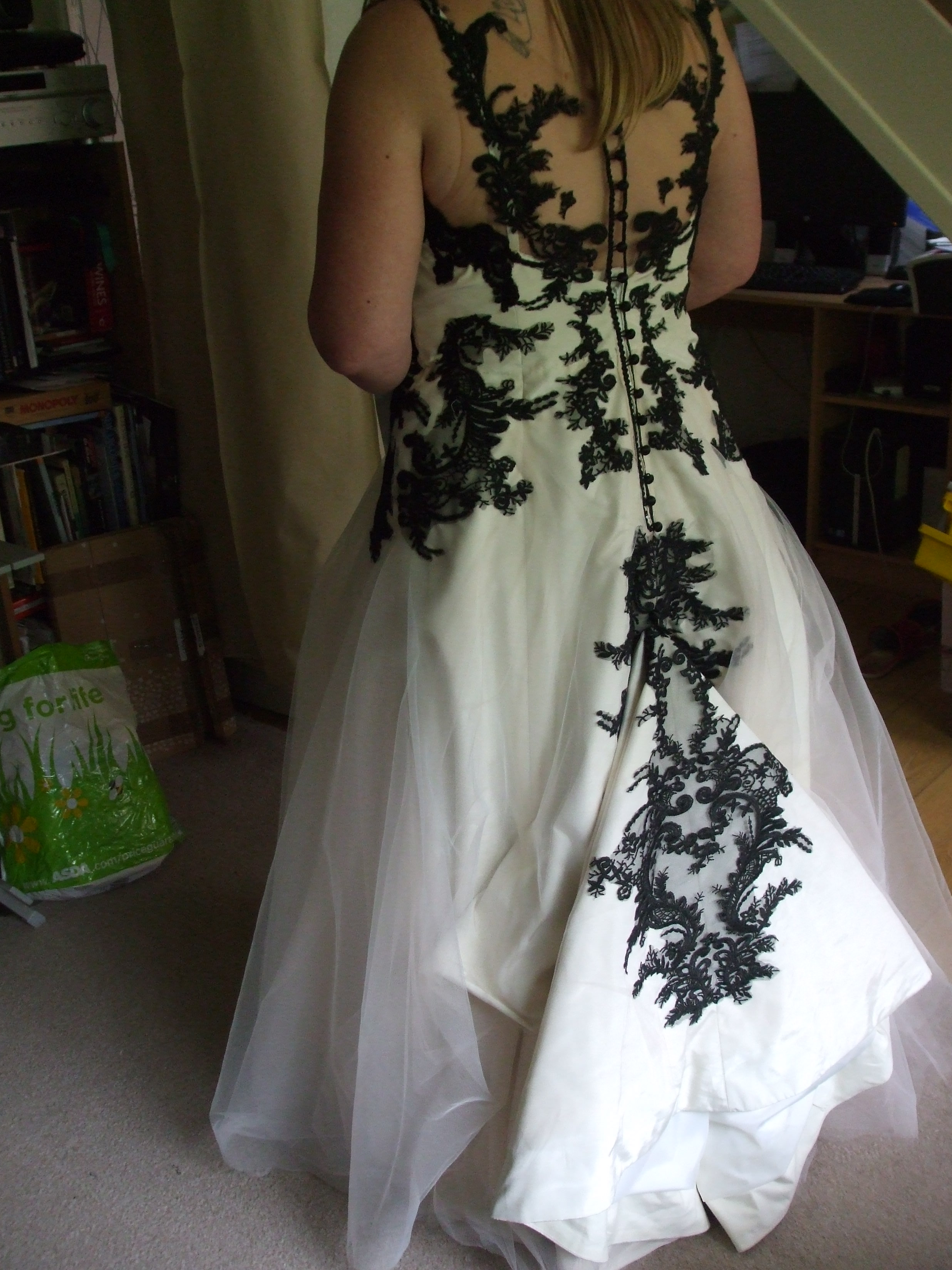 Then we took advantage of the sunshine, spread a duvet cover on the slightly muddy grass, and got some shots of the dress both bustled and unbustled, in full daylight.  You get a clearer pic of how the subtle pink of the two underlayers comes through. 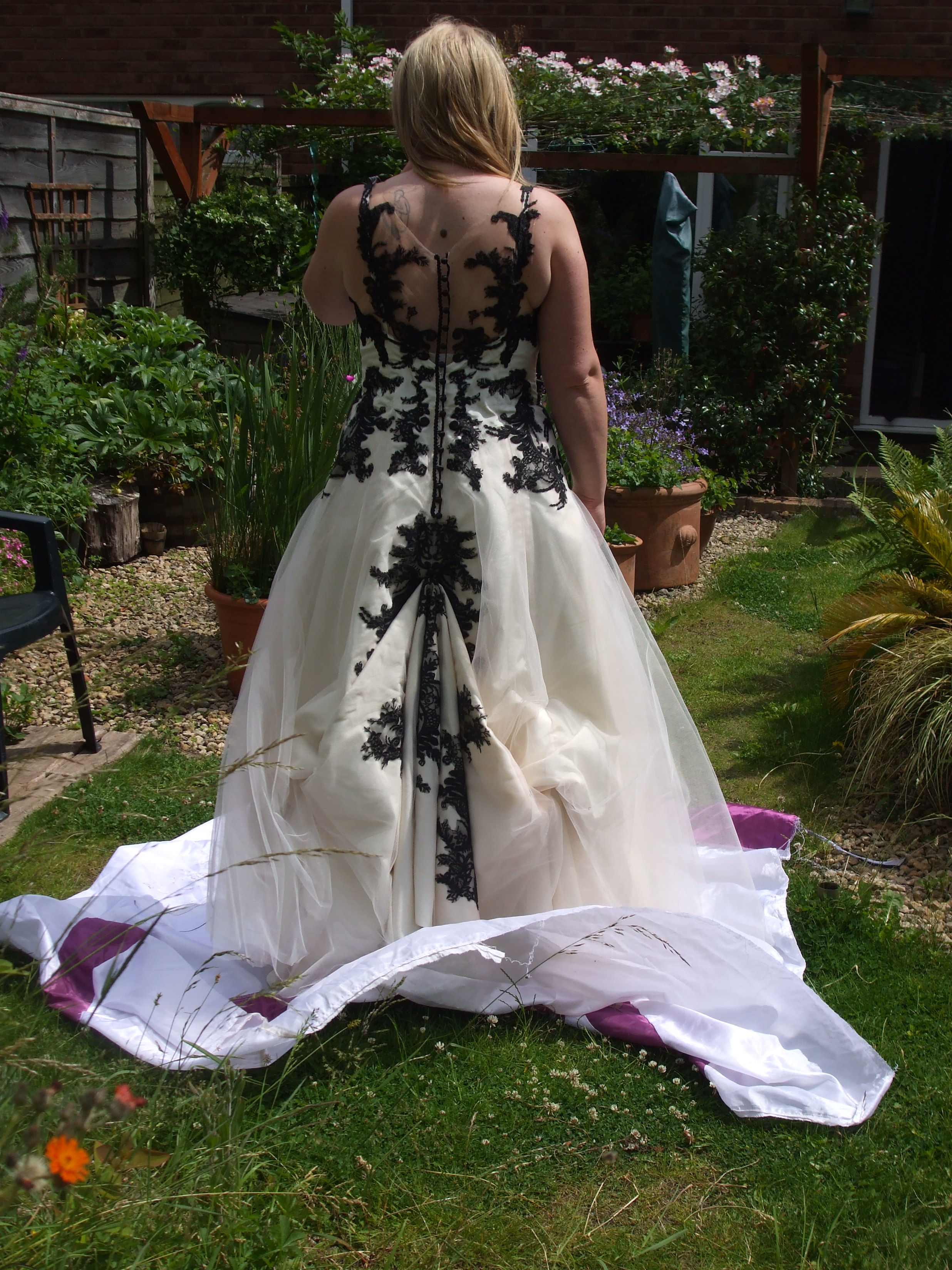 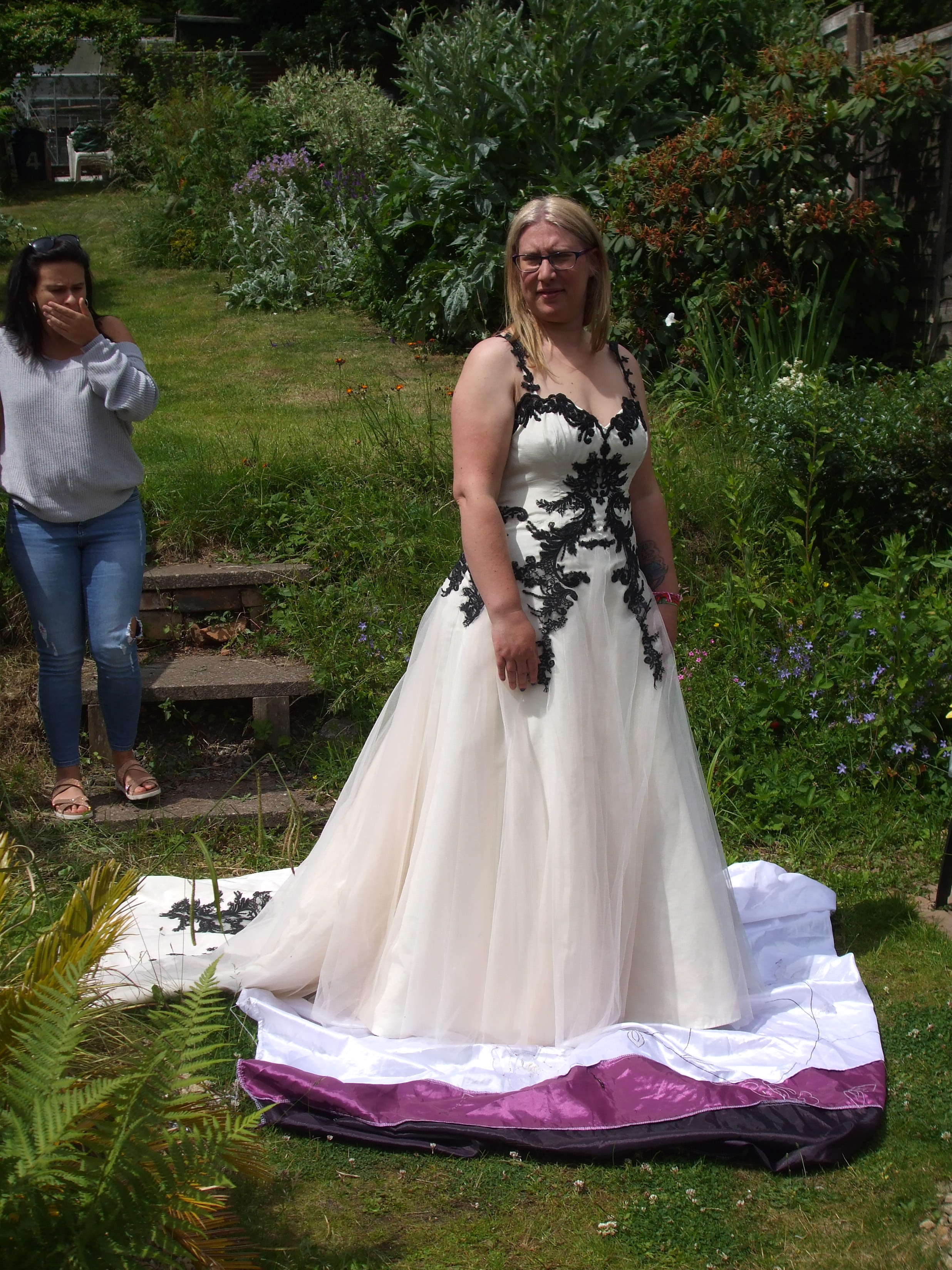 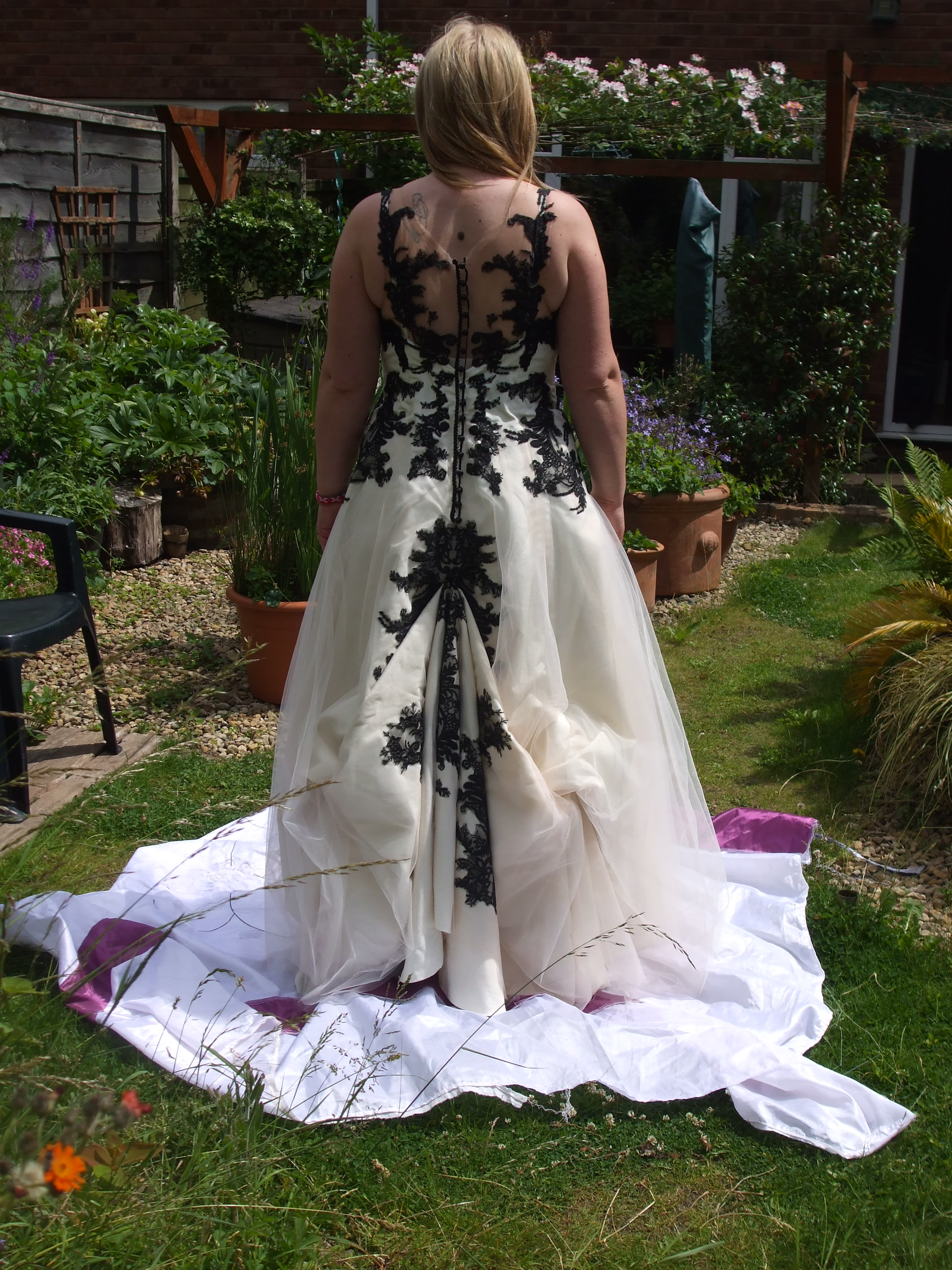 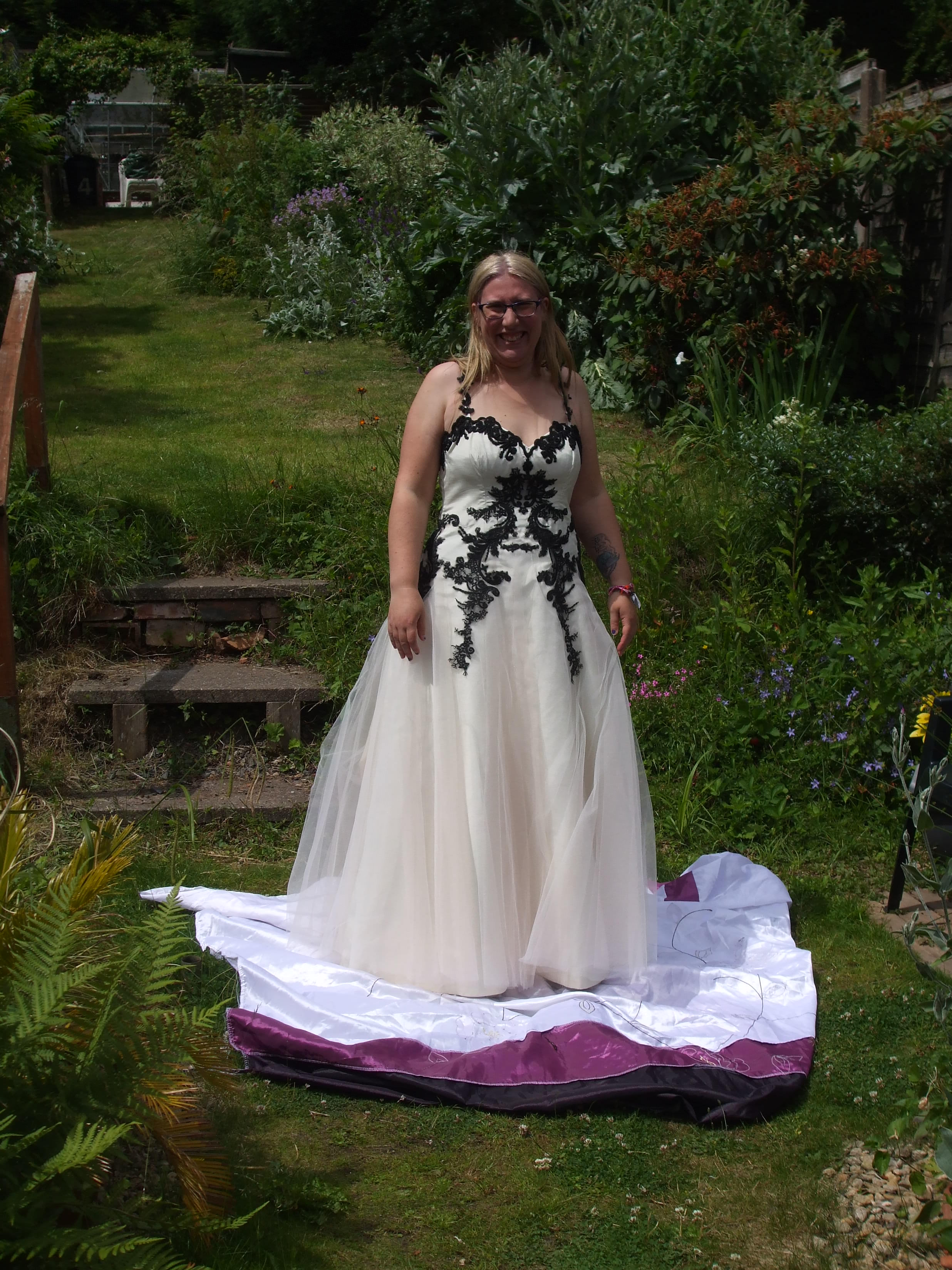 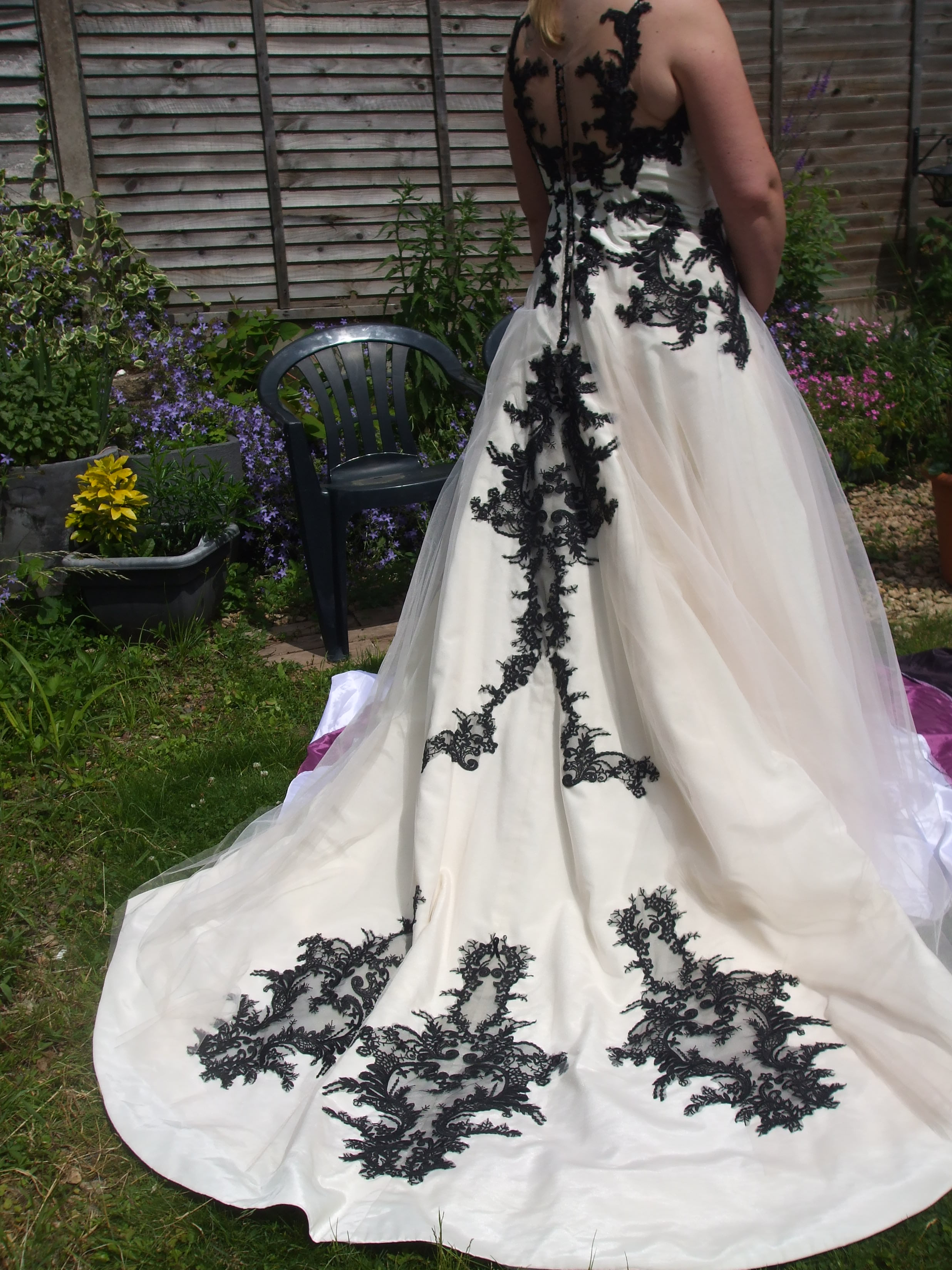 And off they went, all smiling.

Now just the pics of the wedding day, with rainbow hair and makeup…and groom and bridesmaids of course.  Oh and don’t forget the bouncy castle…