After the mesh bodice and first 2 layers of tulle were on, decisions about the lace and buttonholes had to be reached pretty sharpish, and they duly were:  black guipure lace trim for the neckline, a dozen appliqué motifs for the rest [all that was left] and another layer of ivory tulle to soften the pink and let the black show up more sharply.  Tiny satin-covered buttons were ordered, and the elastic loop stuff for fastening.  I had done lots of googling and watched many YouTube videos on how to apply the stuff to an invisible-backed dress!

The motifs are about 12″ long.  This is a later stage of the construction, but shows the motifs clearly.

In due course I added the extra tulle [aaargh] and played with the appliqué, sending pics back and forth for agreement on the neckline.  Another visit, and placement was refined. 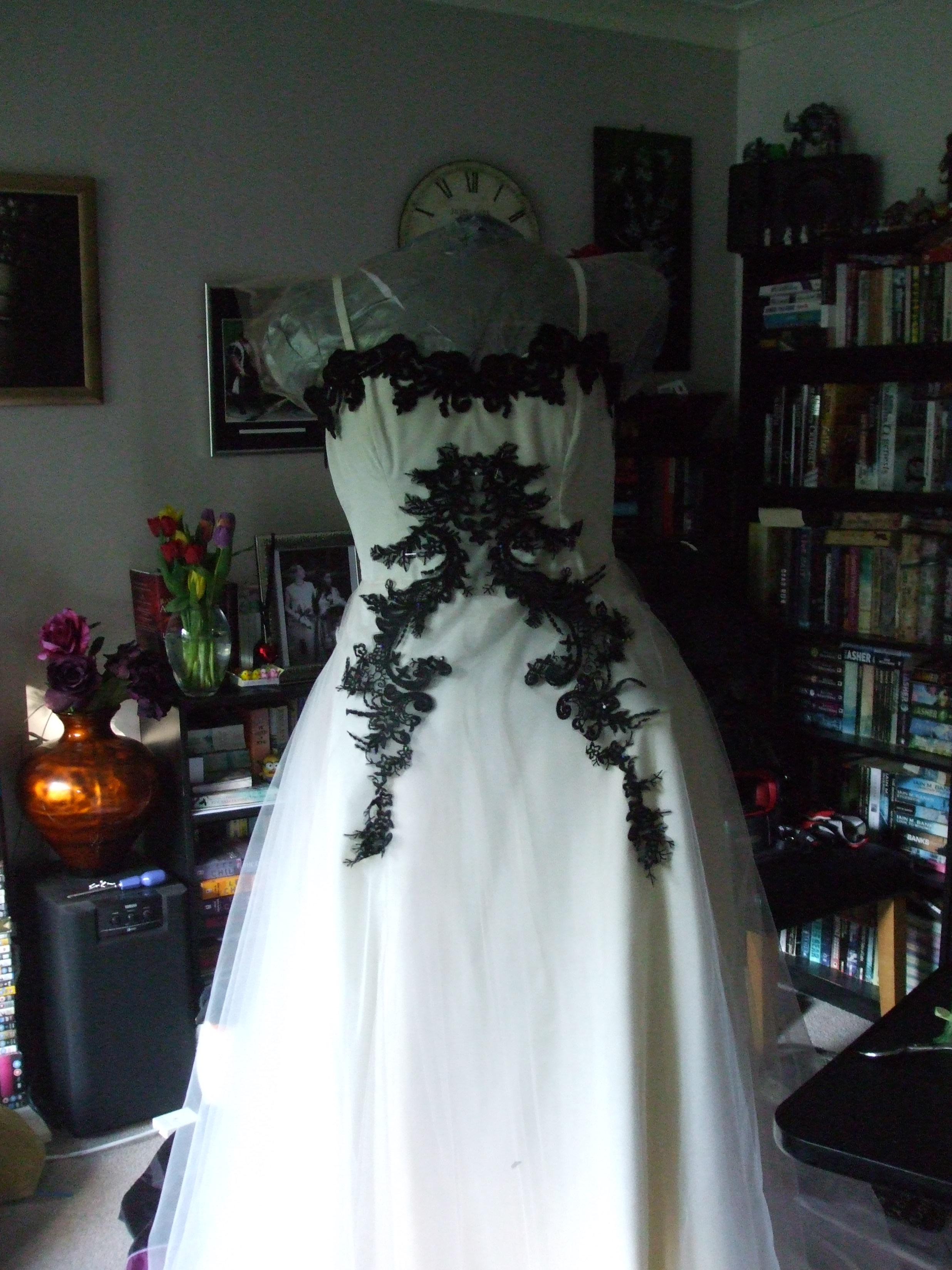 The lace trim round the neckline was HORRIBLE to sew on.  Thick, yet fragile in that the corded parts were not well-attached, and had to get stitched down as well as round the edges.   I was wrestling with attaching this while trying to make sure that the illusion mesh stayed in shape [but it stretches].

I got as far as I could before they came again- I attached the buttons and loops, the third and final layer of bloody tulle, and started sewing the motifs, and parts of motifs, onto the bodice, trying to sew through the various layers without catching the boned bodice in.

In places, I was stitching through just the dupion and underlining, but trying to avoid breaking my fingers or needle on the boning, then crossing over the neckline to sewing only on the illusion mesh, allowing it to still stretch and curve AND fixing the shoulder straps in position, hiding them as well as I could.  Very much 3D sewing, with 2D materials.

Then when they came again for the penultimate fitting, the neckline wasn’t quite right and it had to be partially undone and re-positioned.  Aargh.  Ah well.  Then I started pinning motifs on, and we muttered and mumbled as we came to some sort of decision.

Oh yes, the dress had also managed to develop a pucker/bubble over one boob, presumably as the dupion and underlining had moved against each other when I was attaching all the lace.  I couldn’t find any way to fix it other than the technique known as ‘smooshing’- I just pushed and smoothed the excess under some of the trim and sewed it down.  Needs must!

And now it was time for me to REALLY start sewing.  All those appliqué motifs, to be fiddled, cajoled, and stitched into place.  By hand.

**Yes the eagle-eyed will have spotted that the continuity on the photos isn’t 100%…shoot me.  I had to choose the pics that best matched what I was trying to describe!