Simple, loose fitting, V neck.  This is actually the 2nd version.  The first in a khaki green knit remnant form the Jersey Lady in Birmingham market, apparently originally River Island, was  a bit of a mess on the neckband, and in any case, the missus stole it.  I like the looseness of this T shirt, and the depth of the V.  I don’t like the excessive width of the band, or the method of attaching it, which I found difficult to execute neatly [because I’ma  slob]  I prefer to sew it on as though to a round neck, then dart the front into a V.  Shoot me.  Nothing exciting, but I like that this is loose but not voluminous. 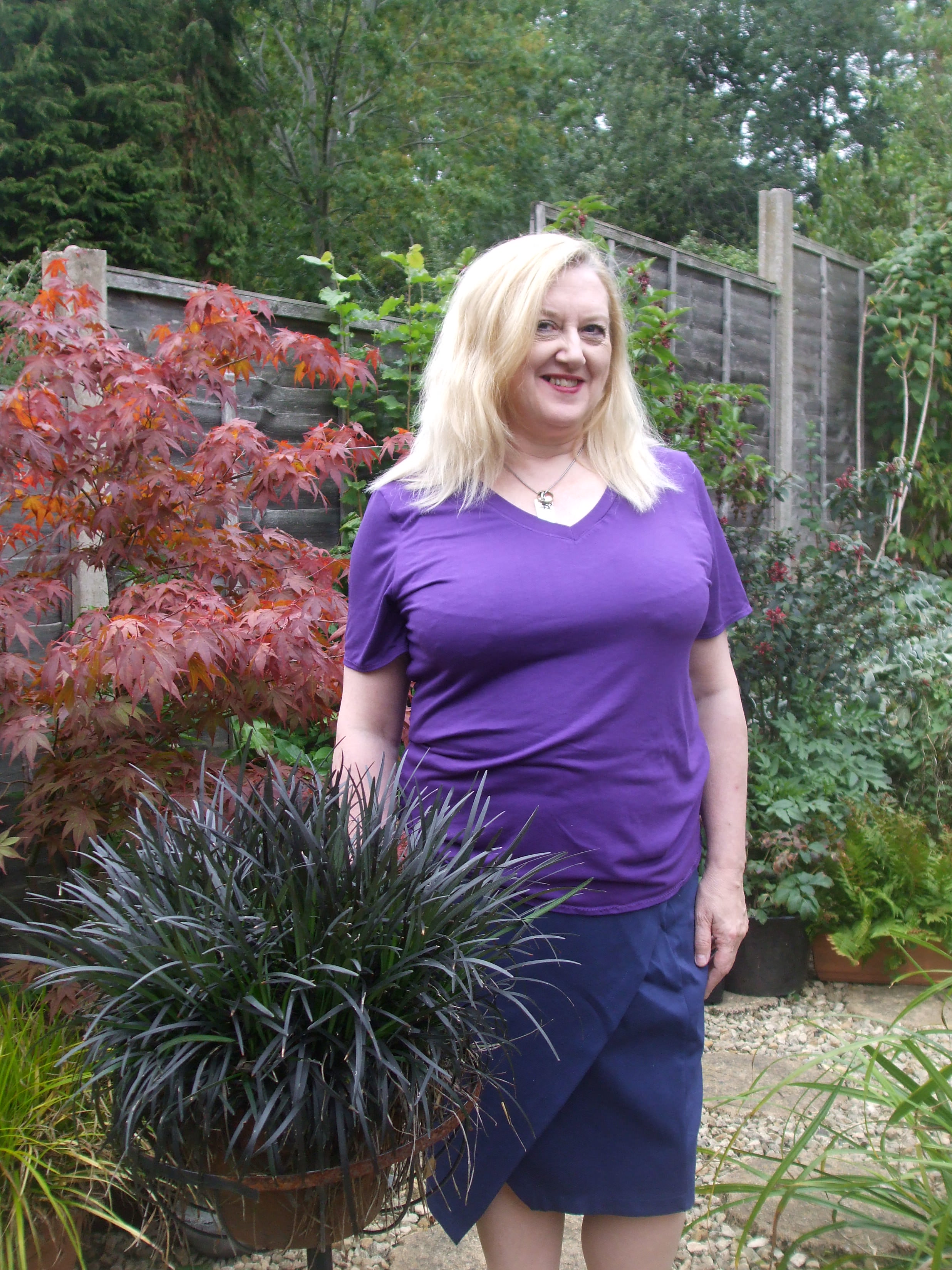 #2= long coat in denim, with purple/green cotton plaid to finish all seams.

It’s a bit of a faff doing this method to get a clean finish, but I couldn’t stand the thought of an open coat with scruffy seams on show.  I do a sort of built-in almost-Hong Kong finish, by stitching the seams with a wide strip of bias  overlaid…I line the binding up with the presser foot, so it doesn’t add bulk.  I then trim down the seams as for a felled seam, but wrap the binding over instead of the upper seam allowance.  All very tidy, and decorative, without the faff of HK.  I didn’t bother binding inside the sleeves, just overlocked, but I bound the hem. 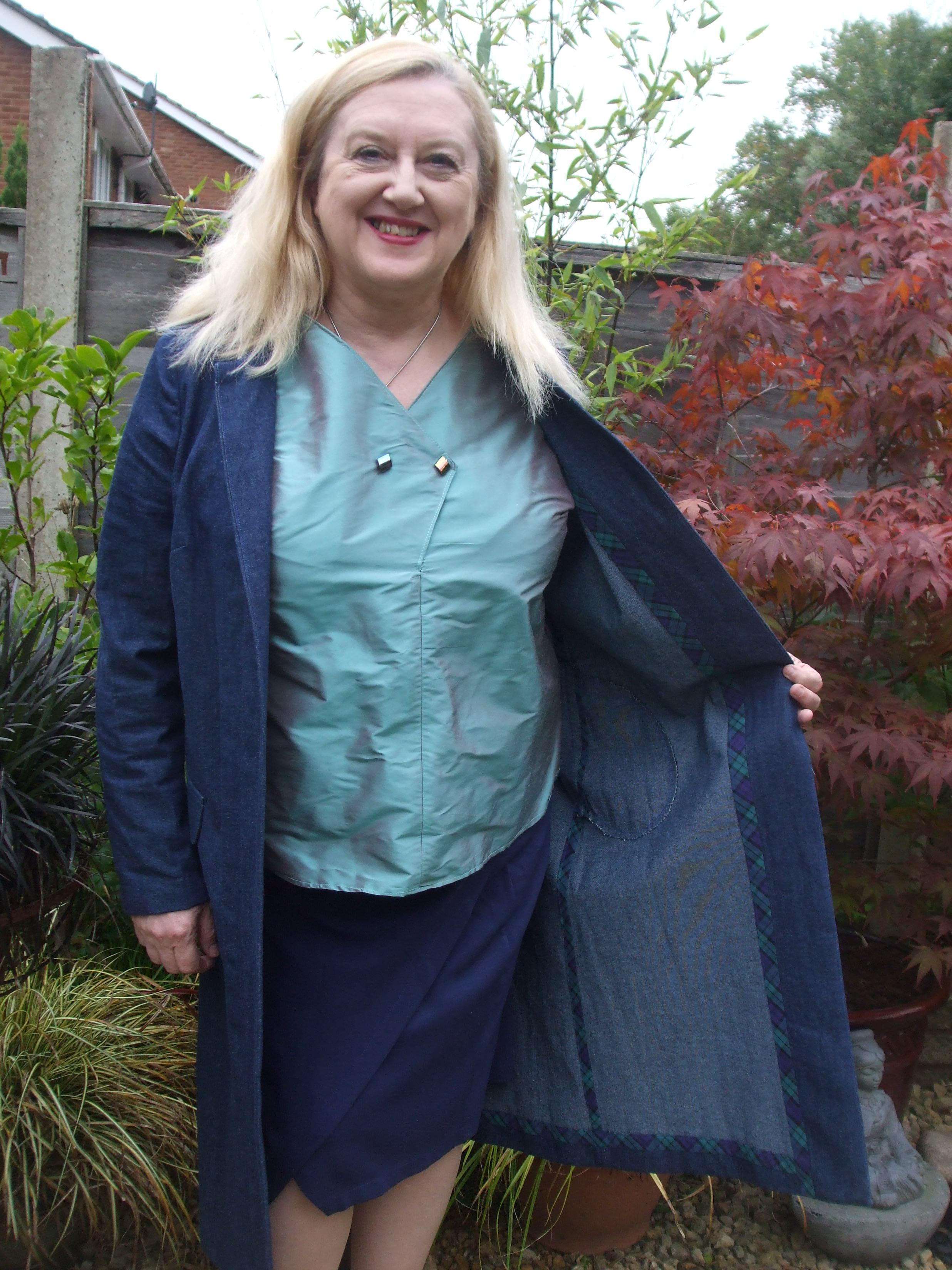 It took rather a long time for such a simple garment, but I think it will be useful in the autumn.  I hand stitched all the hems, and those long facings, to prevent flapping.  I’m not wild about the way the pockets look on the inside- I may need to fasten them down more securely on future versions…there will be more.  I like the swoosh of  a long coat, but as this is so nicely slimline, I think it makes me look taller, and is more wearable than something voluminous for work.  A knit version next, and maybe a sleeveless one as well.

I’m peeved that when I shortened it by about 4″ [partly because that was all I could get out of the yardage] I forgot to move the vent opening up, so I ended with a teensy vent of only about 3″, rather pointless!  Ah well.  I like the pocket flaps which are purely cosmetic, as the pockets are in the seams.

I think this coat was thought out for a knit, as it has that front band piece as well as a facing…I toyed with the idea of decorating this in some way, but couldn’t decide.  It may happen at a later date, who knows? 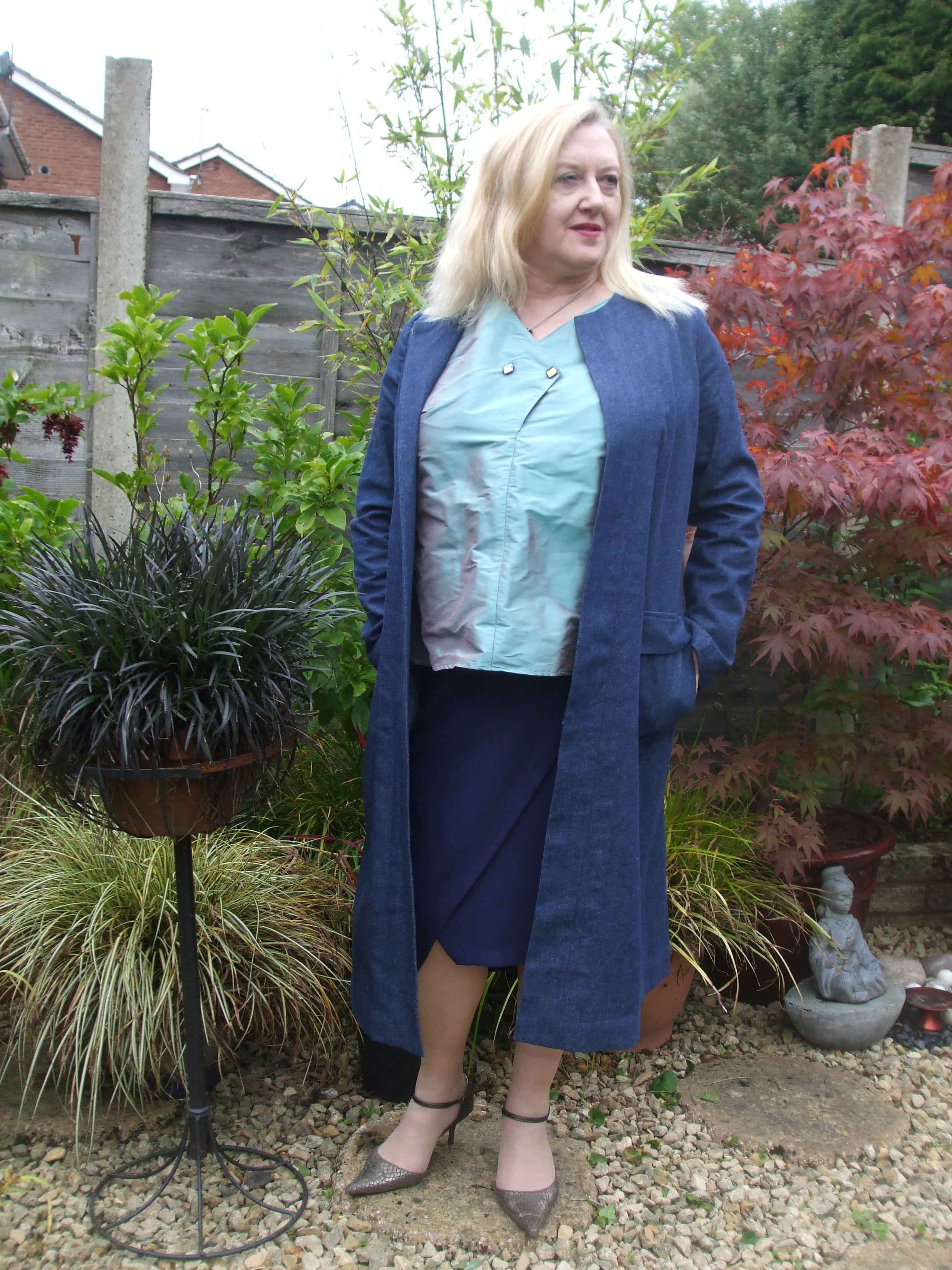 **I wore this out, hated the flappy pockets showing in an unlined coat, so handstitched them to the fronts in a nicely matching thread so it doesn’t show on the right side.  Much better. 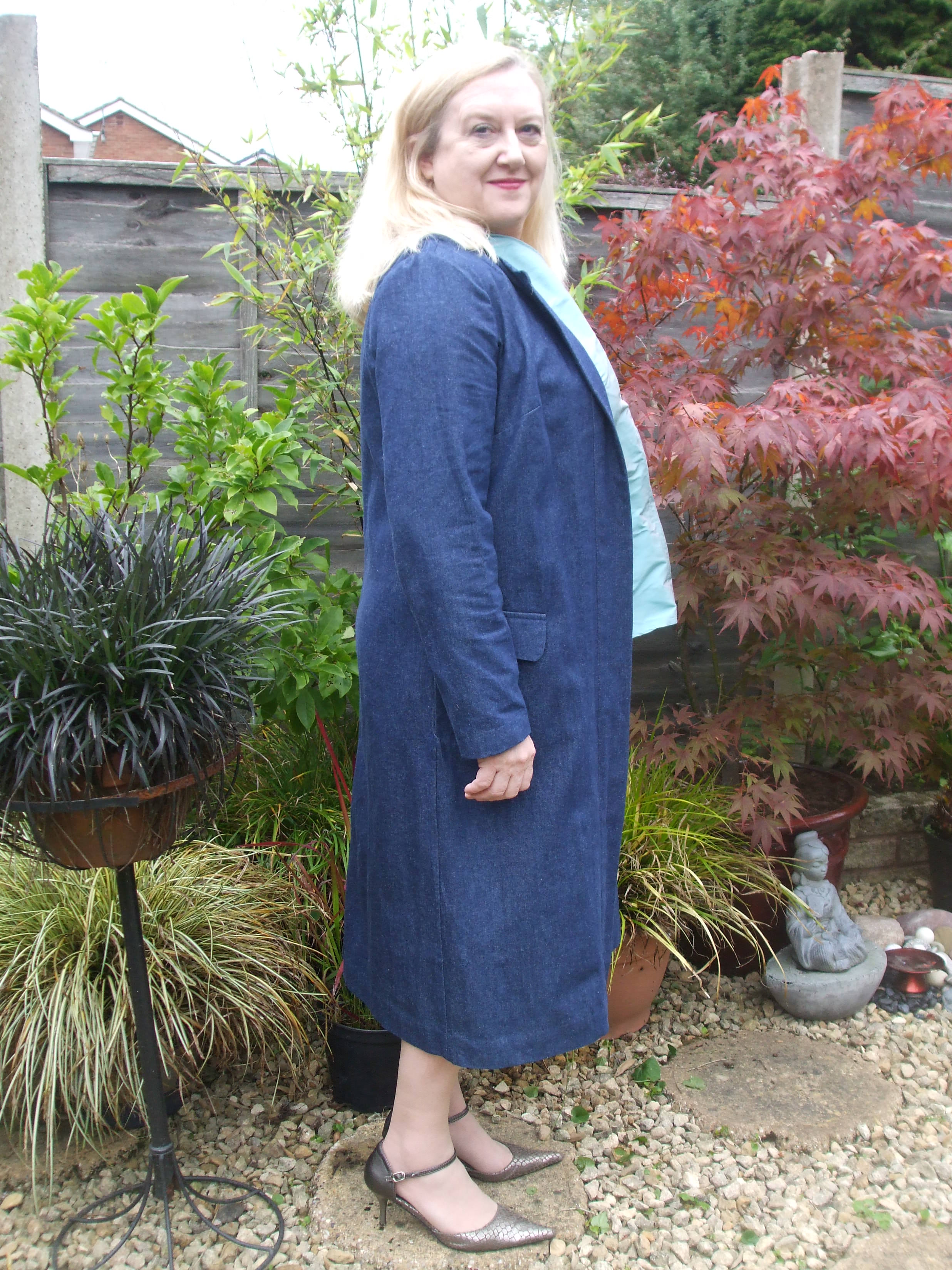 #3:  wide leg trousers in heather-coloured herringbone fabric [could be wool or wool blend, not sure].  I bought this years ago, from Barry’s, intending it to be for the missus…but snooze and lose, now it’s mine!  It is almost silky to the touch, slightly textured, and with a teensy amount of stretch for comfort.  No idea on the content

I’m determined to make wide leg trousers that actually suit me, as I used to have several pairs, and loved them for work.  As long as I team them with heels, I get away with it- flat shoes, and I look like a hobbit.

I decided to omit the fly front, belt loops and ‘proper’ waistband on these, and put on a stretch ‘yoga’ waistband for comfort and practicality.  I’m all about the stretch these days.  I took this waistband from the Greenstyle trouser pattern that I also haven’t blogged yet!  Bad Fairy. 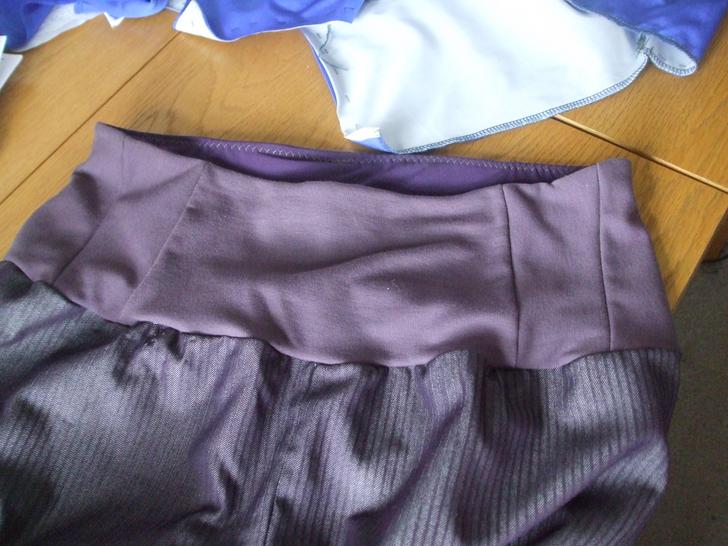 I’m not sure these are really me though- the size of my belly makes the front hang and flap from my gut making some weird shapes at the crotch.  With a longish top over it will be fine though, very comfy. 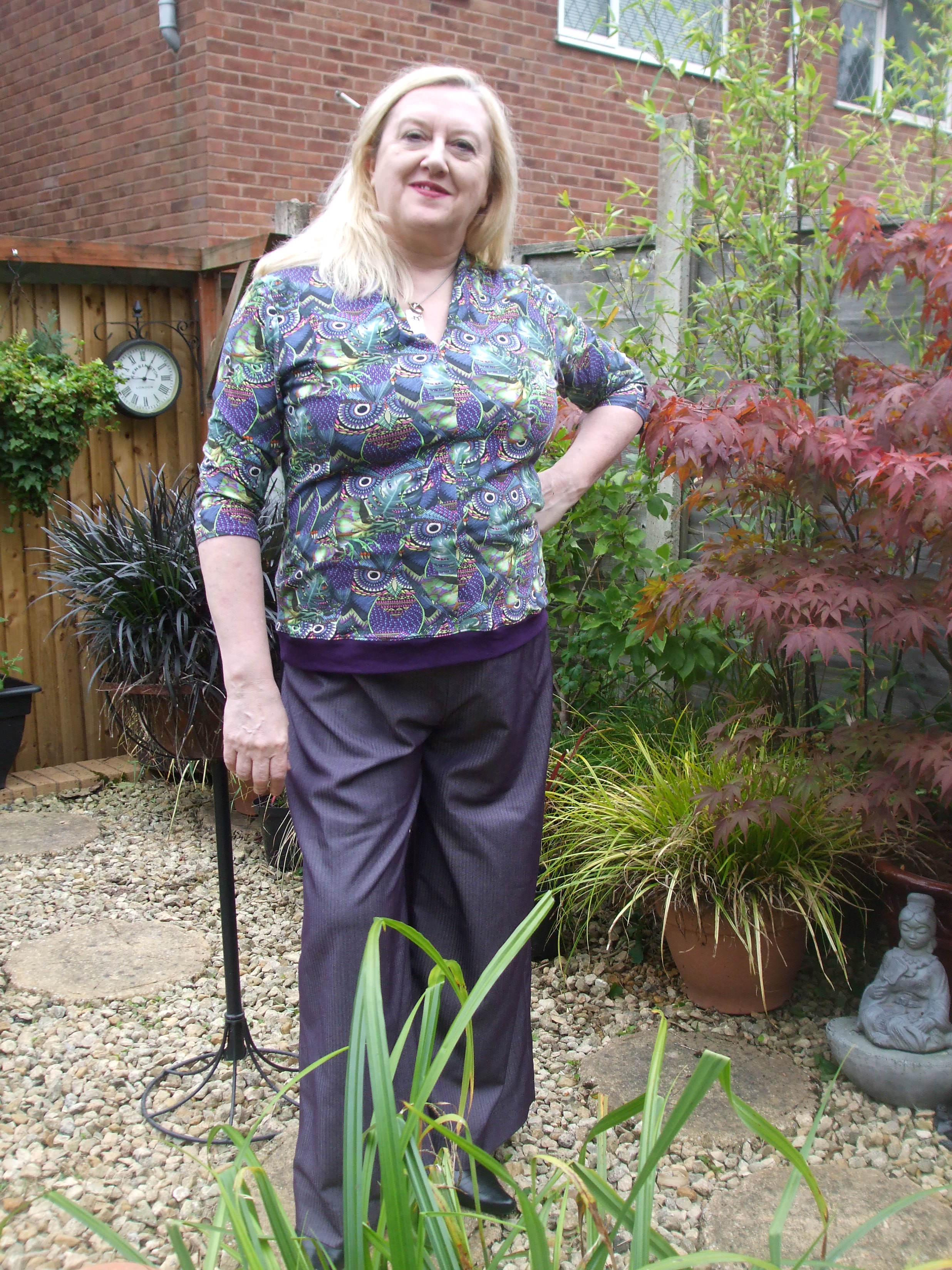 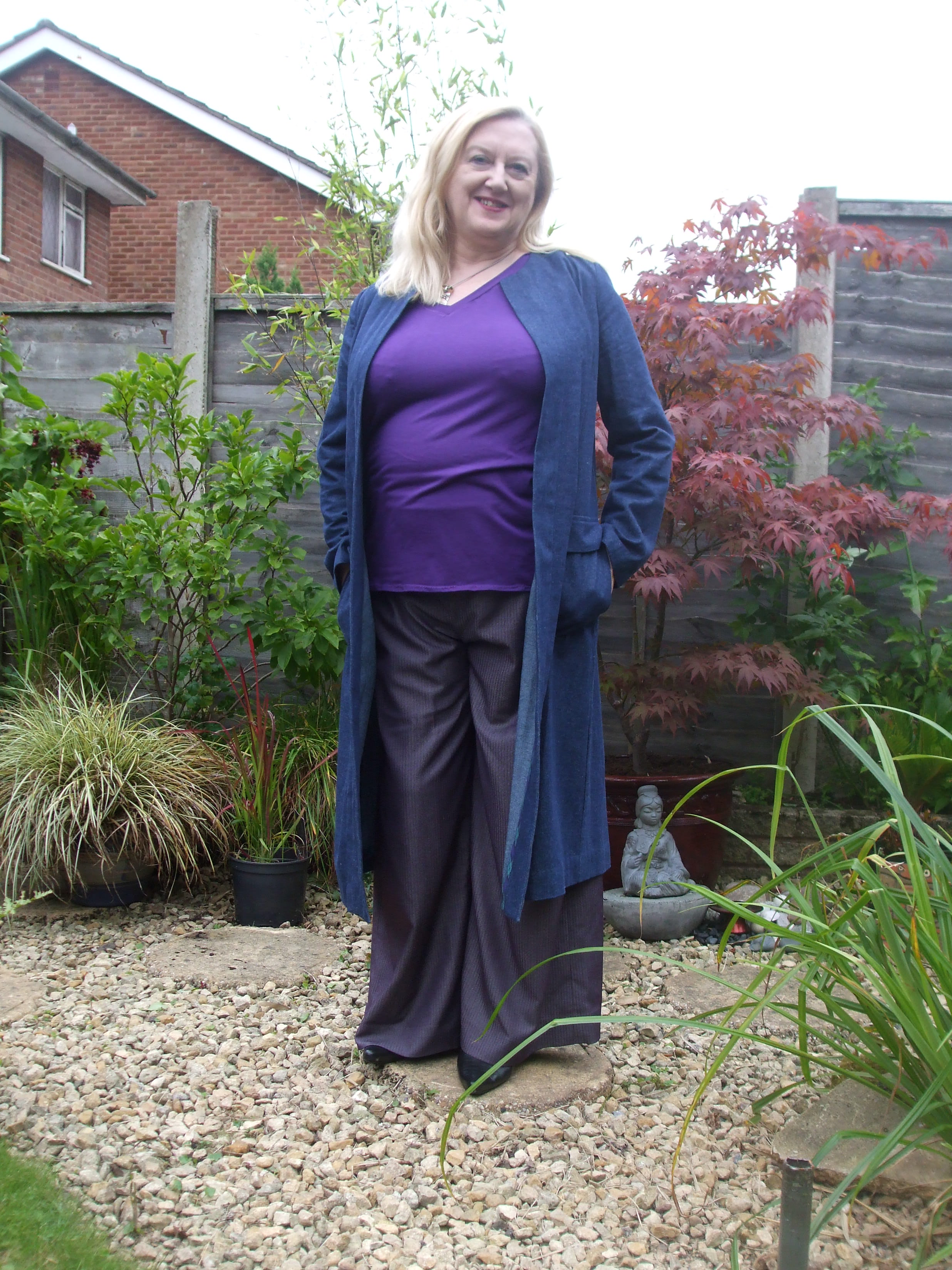 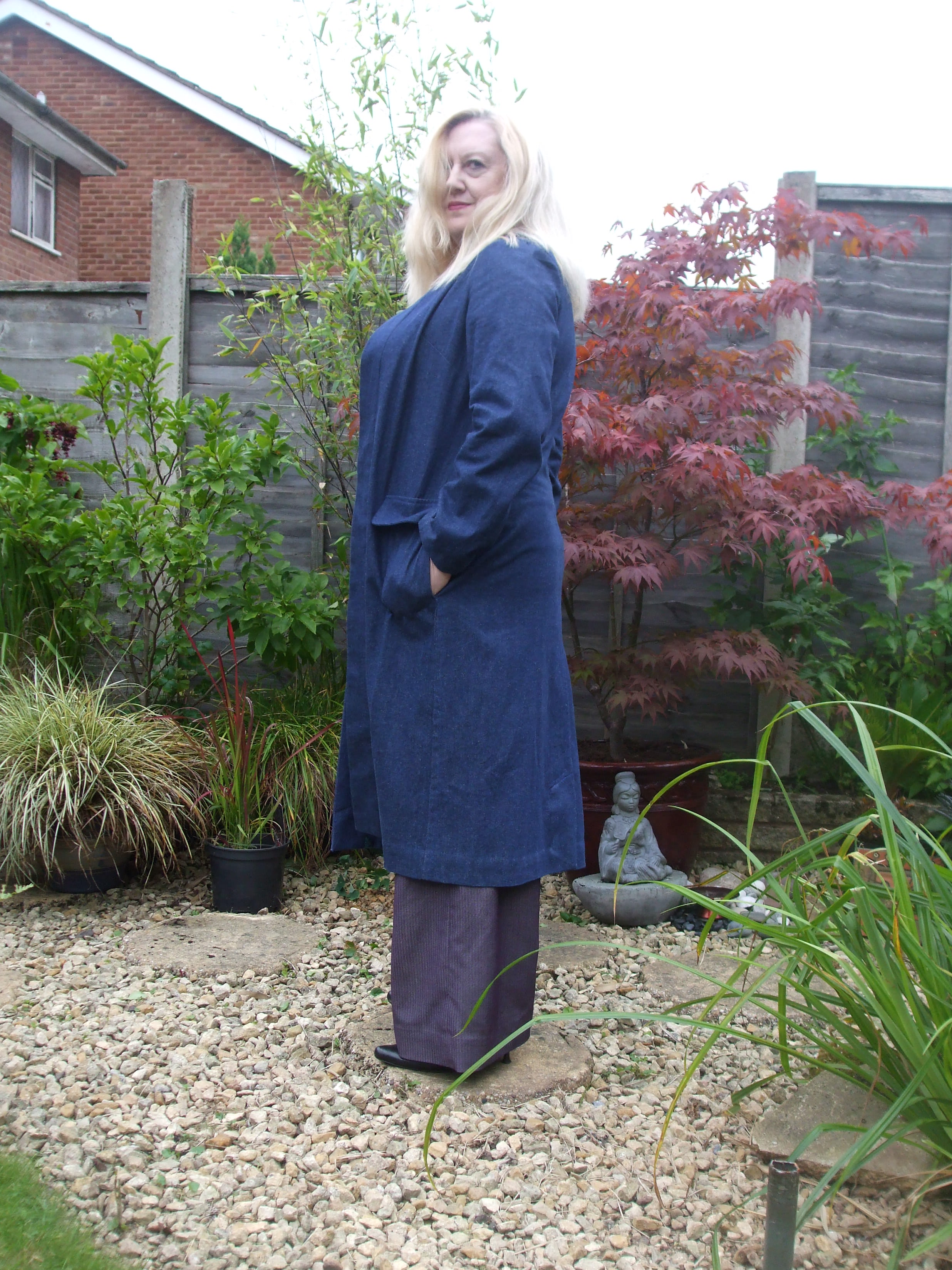 So- trousers, maybe not, coat and T shirt yes please, more.  Not bad for a single ‘wardrobe’ pattern.