[Moody Blues- a  Brummie band, did you know?]

The fabric is very fine, so the whole thing, bar the sleeves, is cut double for a little opacity.  I used fine fusible knit interfacing on the front band/collar pieces, the cuffs, and to reinforce the V shapes…then decided to sew the whole thing by hand to avoid wrecking it in the machine. This helped me keep a soft finish and drape, but reasonably sharp points on those yokes, which are much more of a feature in a plain fabric of course.

Well, swings and roundabouts.  I decided to start with the back points, which I tackled in stages.  First I sewed the shorter outer seams, then one of the long inner ones, then the other long one.

Hmmm.  NEARLY good.  I’d basted the two body pieces together to keep the edges level, then sandwiched it between the two yoke pieces to do the seams.  This worked well for the first three steps…but started to get very tricksy when I tried to get the last edge to sit properly.  The point is not great, but then to be honest, it wasn’t great  when I made the first one the easy way either!

I changed method for the fronts, sewing the doubled and basted bodice pieces to just ONE layer of the band, then turning it and catch-stitching it down to the previous seamline.  Much easier, faster, neater.  You live and learn!

French seams [very, very narrow ones as Style Arc only allow 3/8″] for the sleeves.  I sewed the cuffs on single layer, folded, and stitched folded edges over the seams again.  Lovely!  For the side seams, I sewed as if one bodice layer was lining, so all raw edges were enclosed.

I would have liked to cover the sleeve seams using the inner layers, but yokes etc made this impossible, so out came the leftover fabric to cut some bias strips, which I used for neatening. 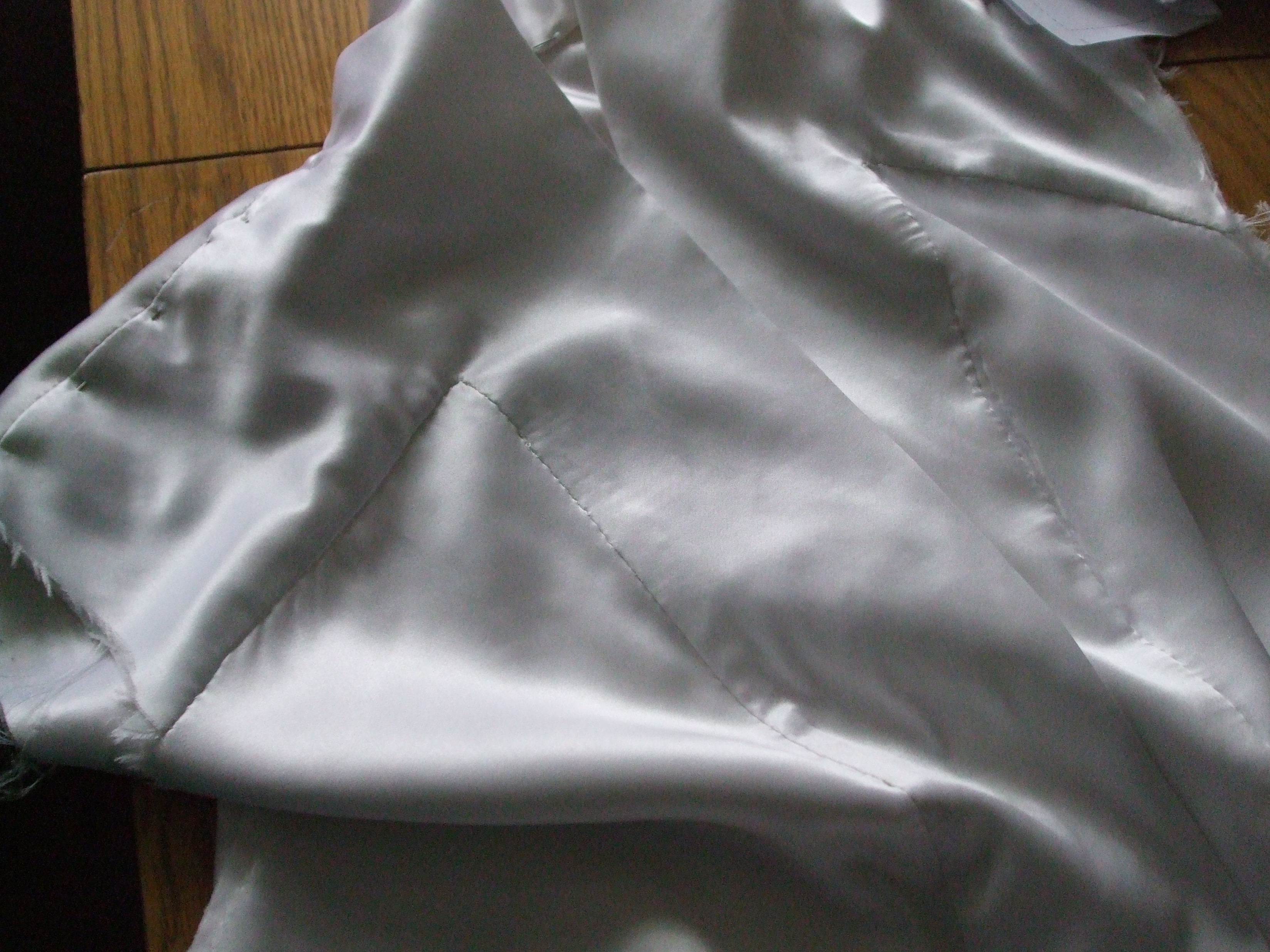 I did the buttonholes on the machine- my hand sewn ones are not up to snuff… and therein lay another tale.  The first buttonhole was OK, but the position was a bit off, so after sewing the next 2, I decided to unpick the first one [bottom buttonhole].  Obviously this was a precarious business, resulting in slight damage to the fabric, but I tucked another bit of fusible inside the band, pressed it, and smoothed it over pretty well.

3rd attempt, I forgot that the buttonhole hadn’t gone through its complete cycle, so it stitched partway and stopped. 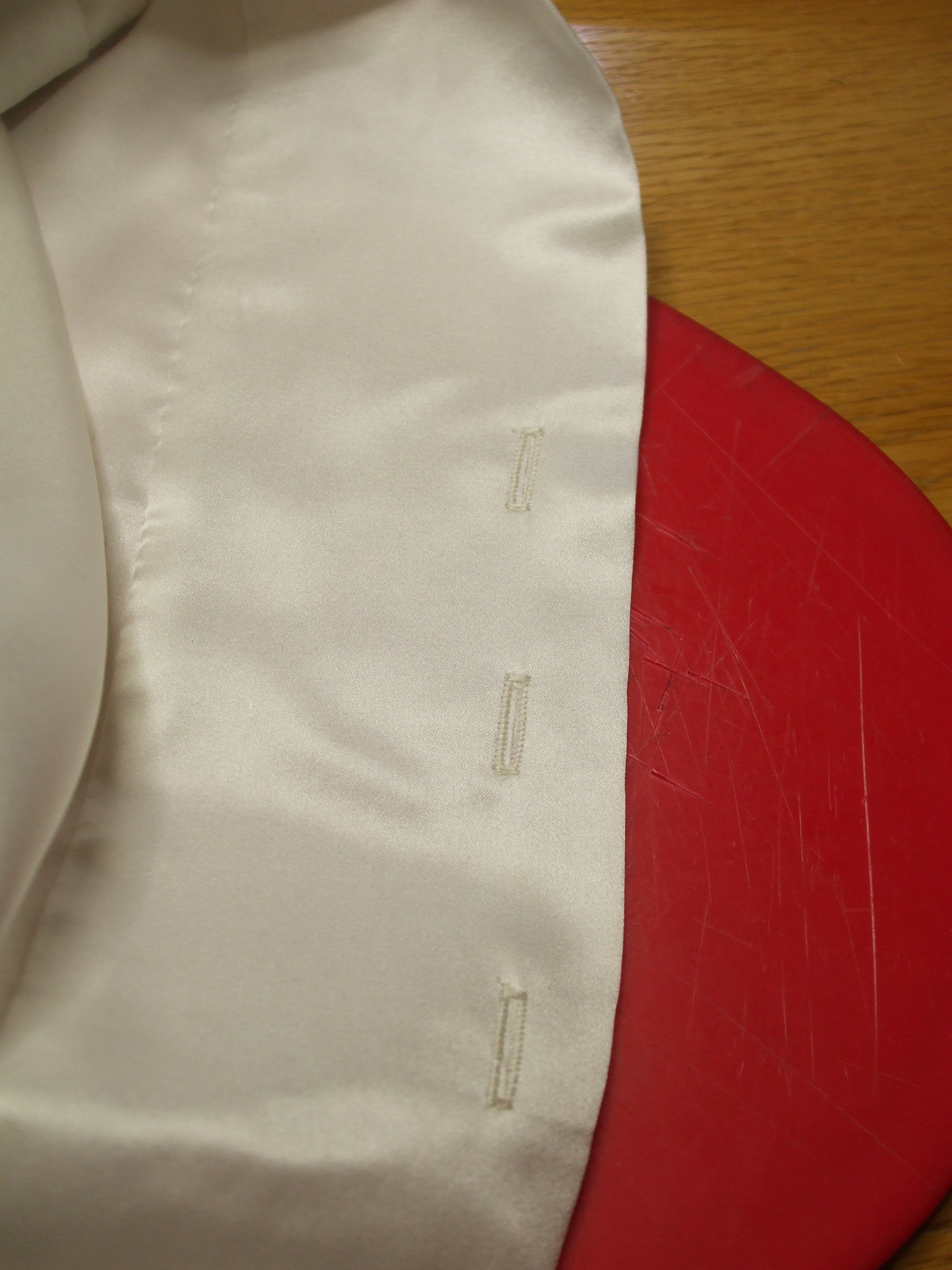 Then the hem.  I decided to do one more step on the machine as this bloody stuff wasn’t going to roll evenly into a neat hem without assistance, so I did a row of stitching a tiny way from the edge [1/16th or so] then pressed, trimmed, turned, pinned and laboriously stitched into the double layers to avoid leaving anything showing on the right side.

Finally I slipped into it…and found that the back hem was WAY too long.  DAMMIT!  Why did I not see this when I took this pic?

I left it overnight to avoid getting into a temper, then trimmed and re-hemmed.  And moved allll the buttons across an inch or so.  Sheesh.  What a palaver!  It is beautiful though. 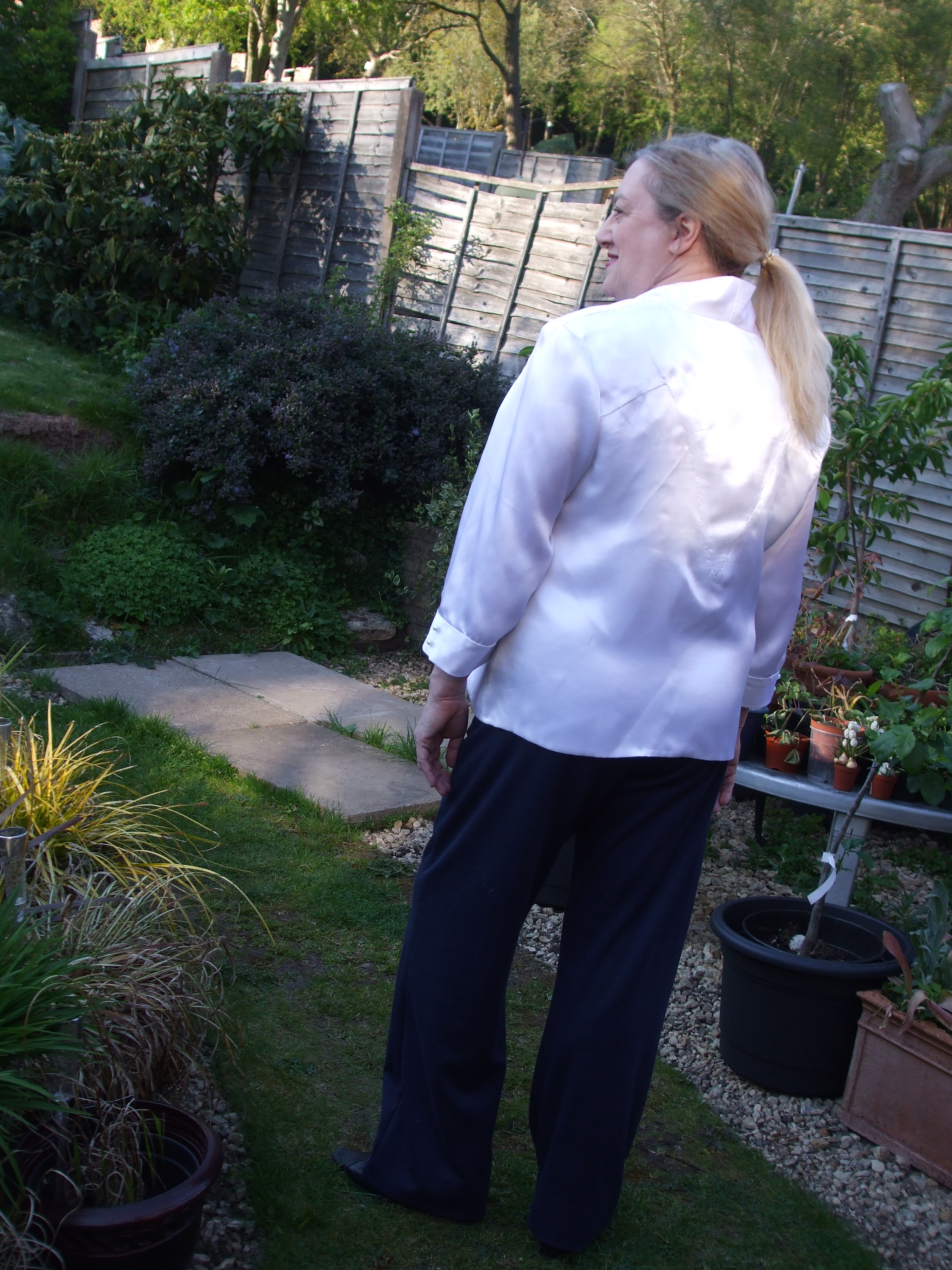 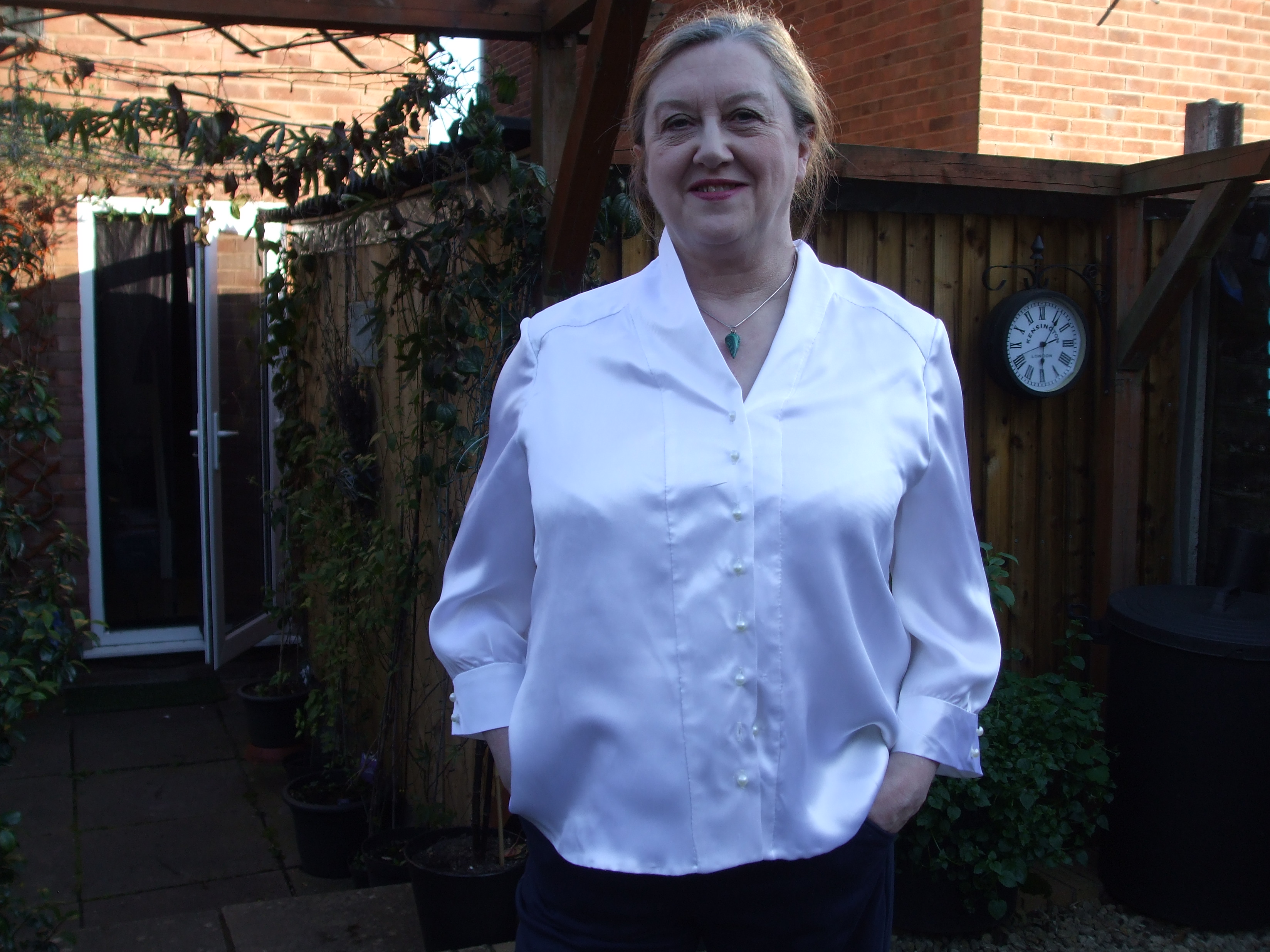 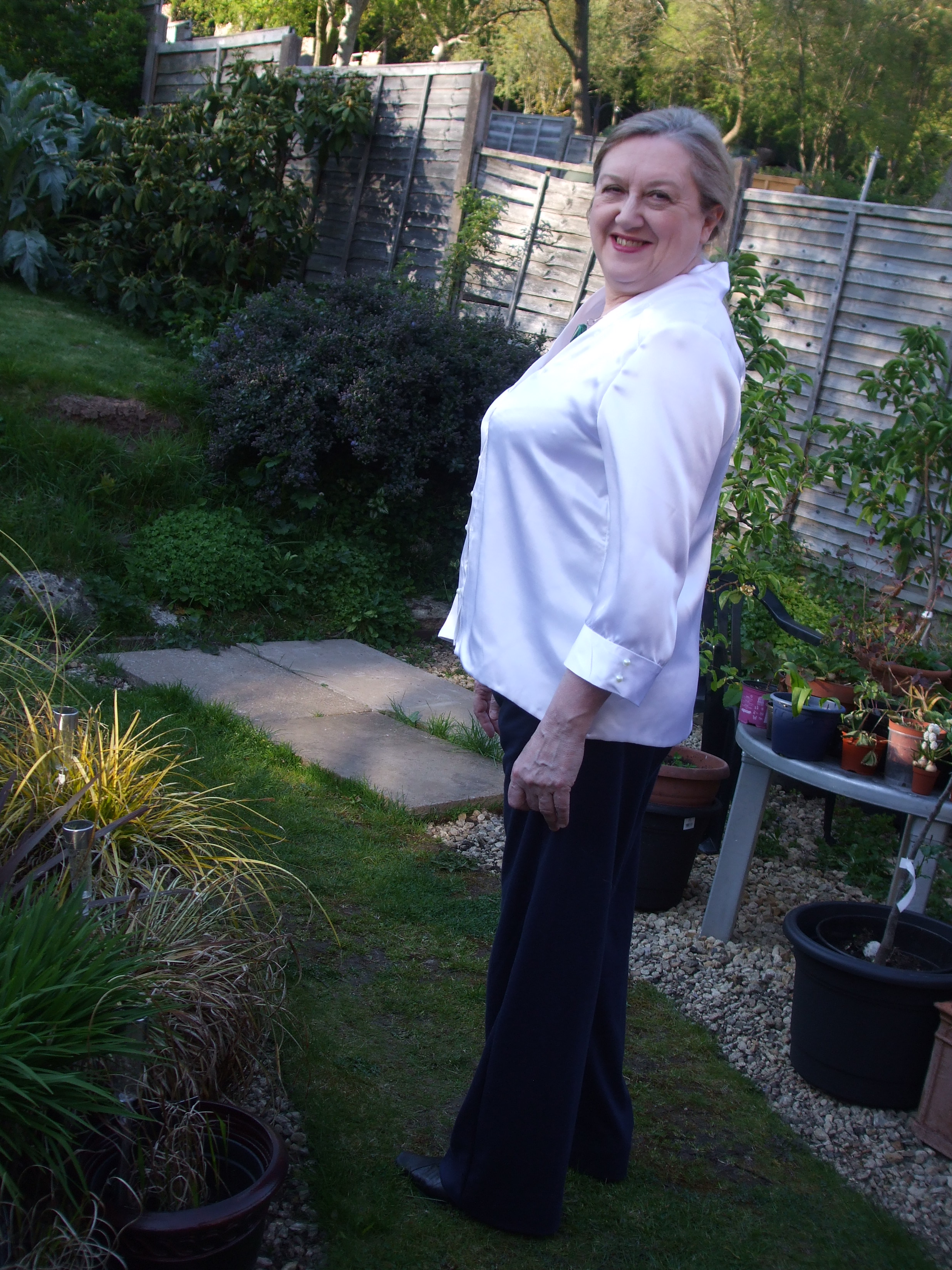 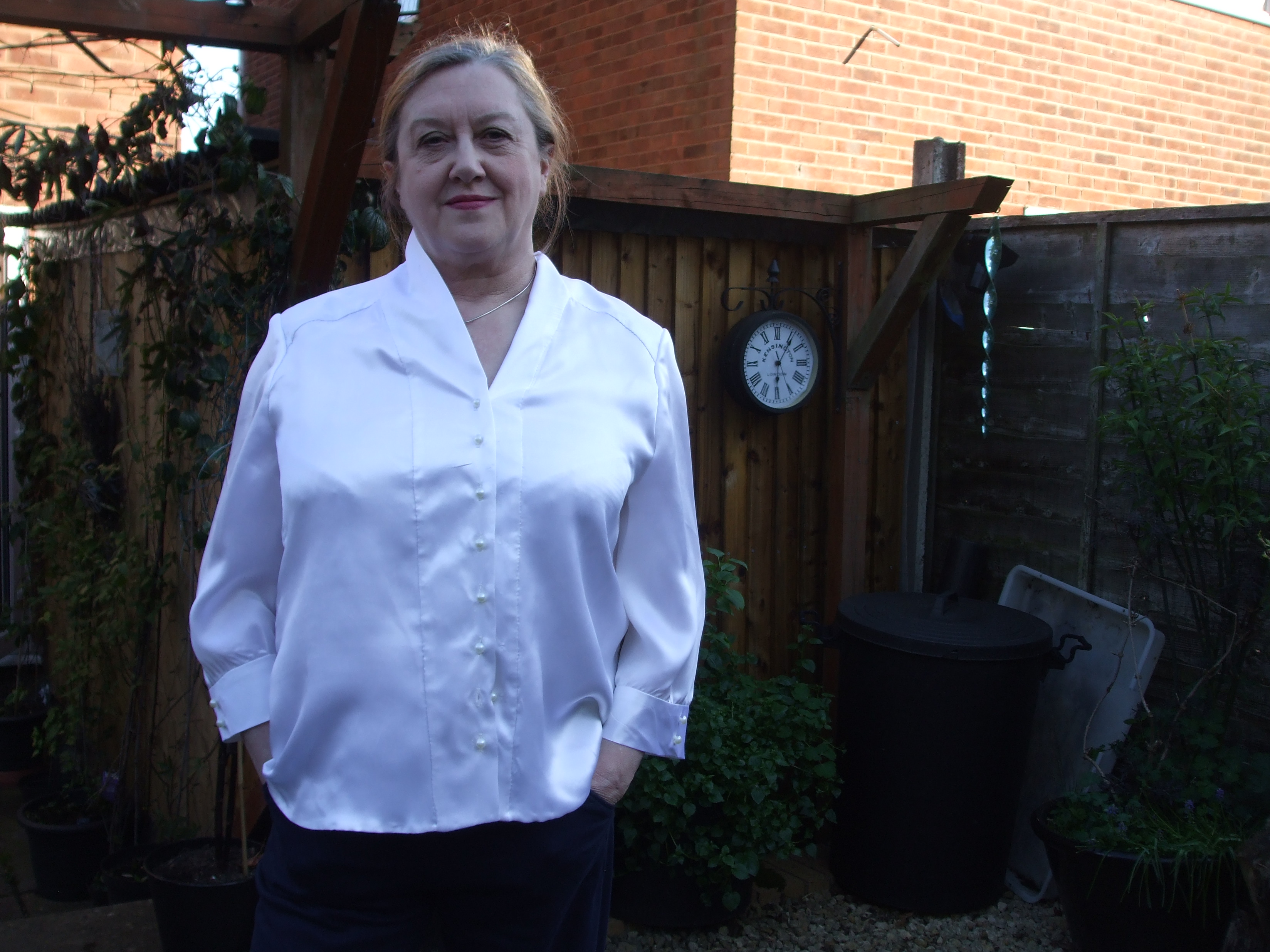 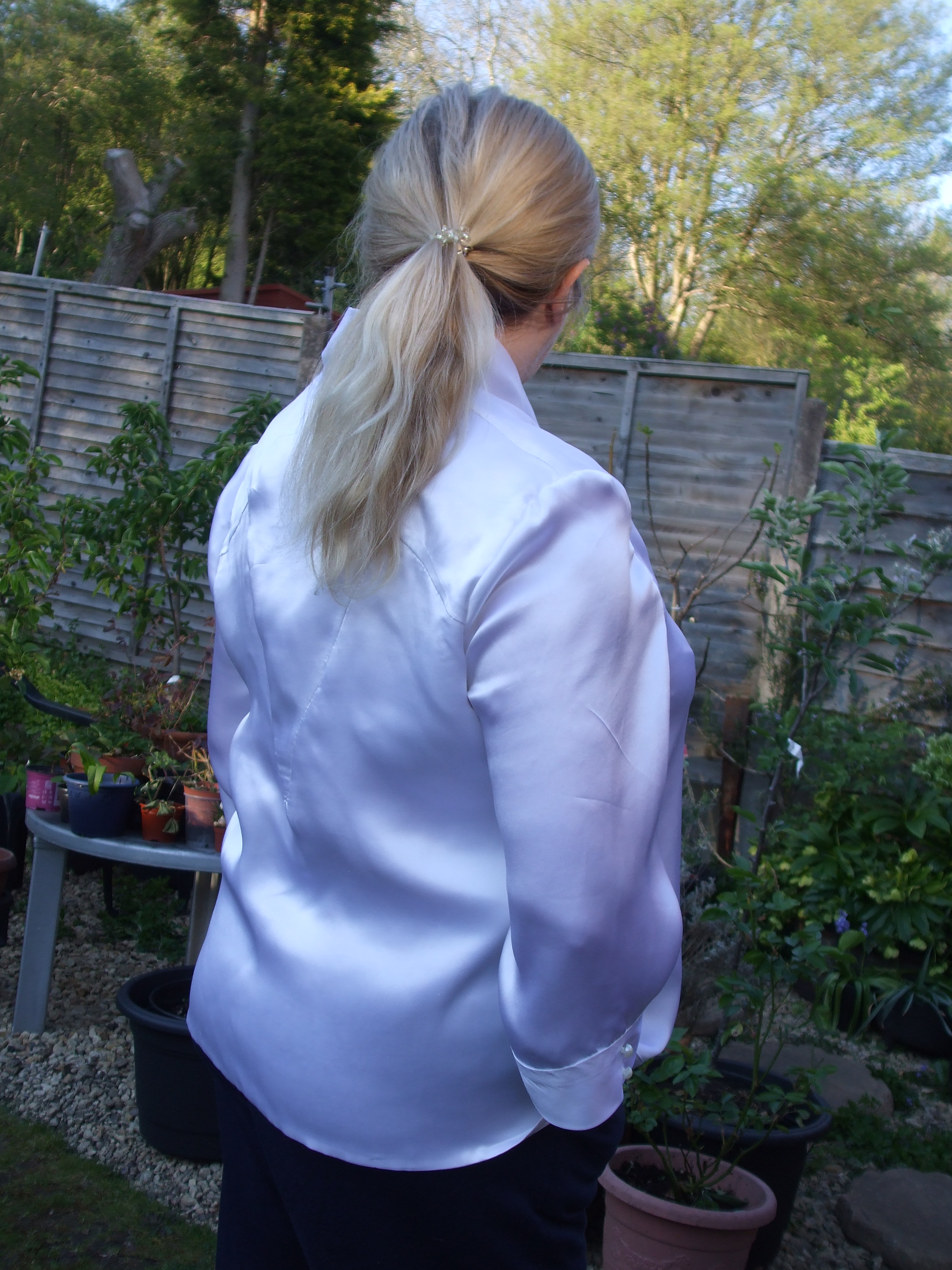 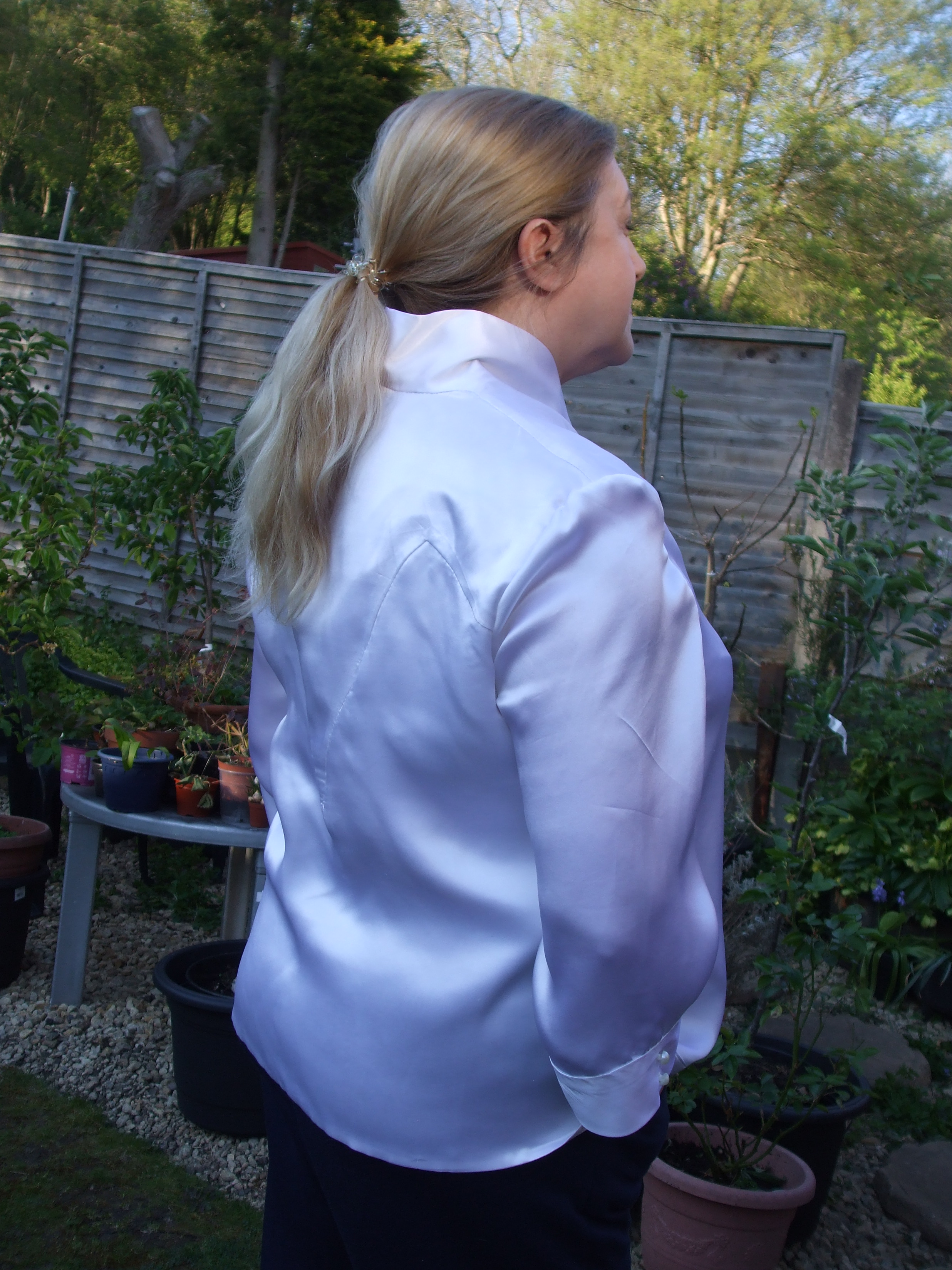 I LOVE THE HEM!

Worth all the fuss?  Probably- it feels delicious next to my skin, and feels very cool and relaxed.  Let’s hope I don’t wreck it when it gets washed!

15 thoughts on “Nights in White Satin”