As if I didn’t already have enough to do, I’ve offered to make costumes for the school’s production of Wizard of Oz.

Of course, near-zero budget, no time, lots and lots of cast members [28 or so, most needing more than one costume.] BRILLIANT!

I started with Toto of course, who wouldn’t? 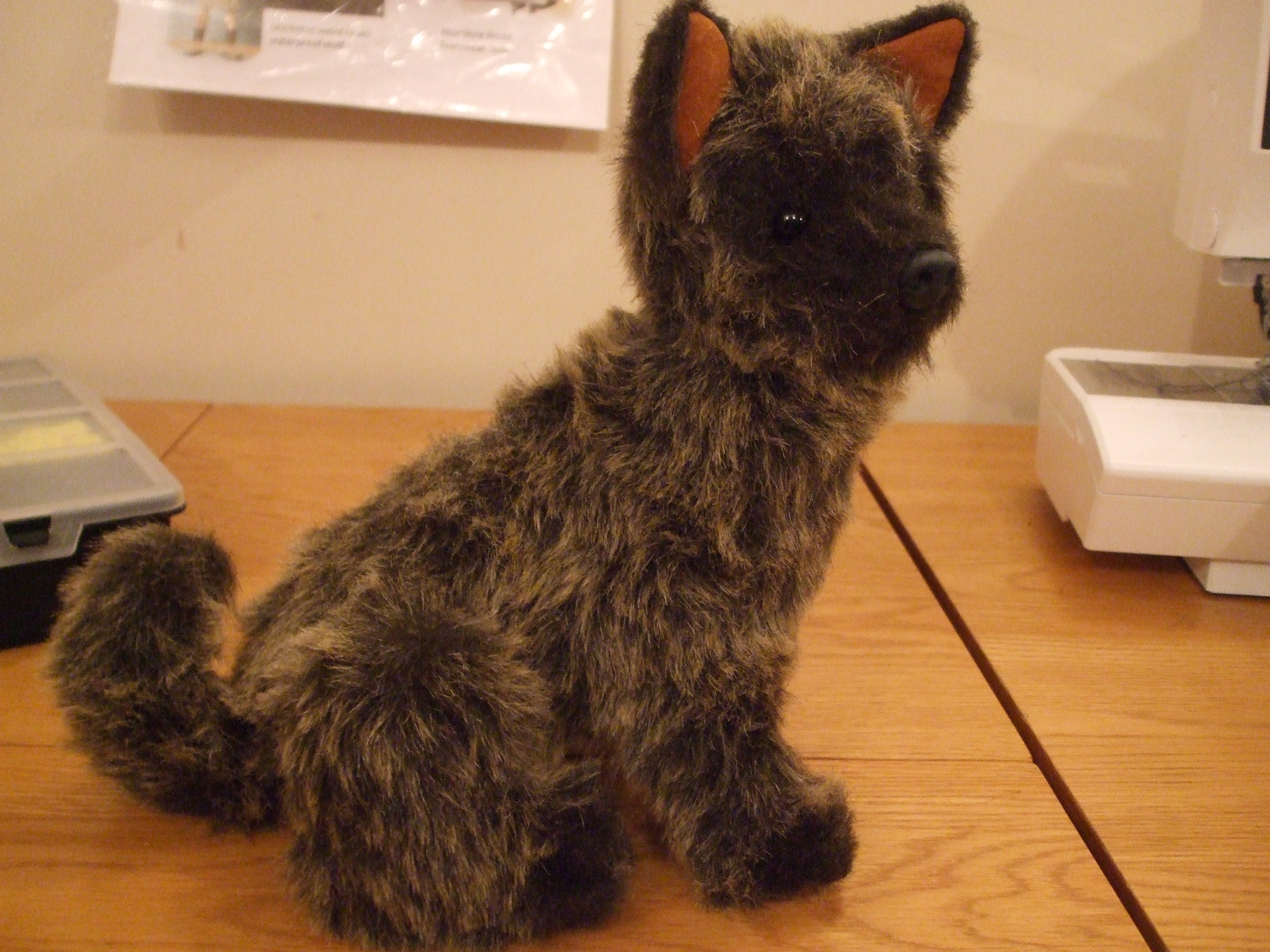 There are 5, or 6, or 7, or 8 dancers, and they get the most changes, needing four costumes each.

There are two completely separate sets of principals, but at least they only get one costume each…unless you count jeans and check shirts for the farmhands, which I don’t cos they can supply their own!  Of course, by and large the principal pairings vary massively in size, so I can’t do costume sharing [not as icky as it sounds, as they’re only doing three shows in total], I may be able to get clever with the tin [wo]man and the wicked witch, but the 2 Glindas are at least 6″ out on every main measurement.

I put out a plea for specific coloured fabrics and donated saris etc and had quite a stash the week before Easter, so I began by sorting it by colour, aided by a very useful assistant.  I’d hoped to send several kids home with things to sew, as they were very enthusiastic at our first meeting…but only the one turned up so the rest have been sacked in their absence, and I will crack on.

My Munchkins are going to be in purple and orange, maybe some yellow, and we got LOADS donated, including purple ribbon leftover from someone’s wedding.  The drama teacher has few demands, although she likes the idea of the Munchkins wearing stripey socks.  Personally I think that will look rather Xmas elf-like, but hey ho.  I followed a Youtube tutorial on drafting some ‘Lolita’ bloomers, as I think mahoosive baggy pants will look fun, and be fast and easy to make.  By layering up some crappy donated mini tutus, scarves, and other random stuff, I can attach little foofy skirts to the bloomers, or contrive baby doll dresses to wear over the top.

The tutorial is simple enough, and I drafted for an average 40″ hip, as that was the easiest number for the calculations!  I quickly cut out four pairs, and whizzed them up on the overlocker.  They aren’t too bad- I zoomed some of the elastic on with a zigzag, then found that the elastic lost most of its stretch in the process, so switched to a very fast and dirty single fold channel instead.  Not bad, certainly good enough for extras’ costumes!

I free cut a couple of little waistcoats from an oddly narrow-but-long piece of rusty orange wool that was donated and got a load of cheapo stripey socks from the Rag Market.

Bits and pieces of re-purposed and altered clothing, and hey presto, 7 Munchkins!  [But only 6 turned up lol]  They looked dubious at first then realised how good they look as a group.  Fun! 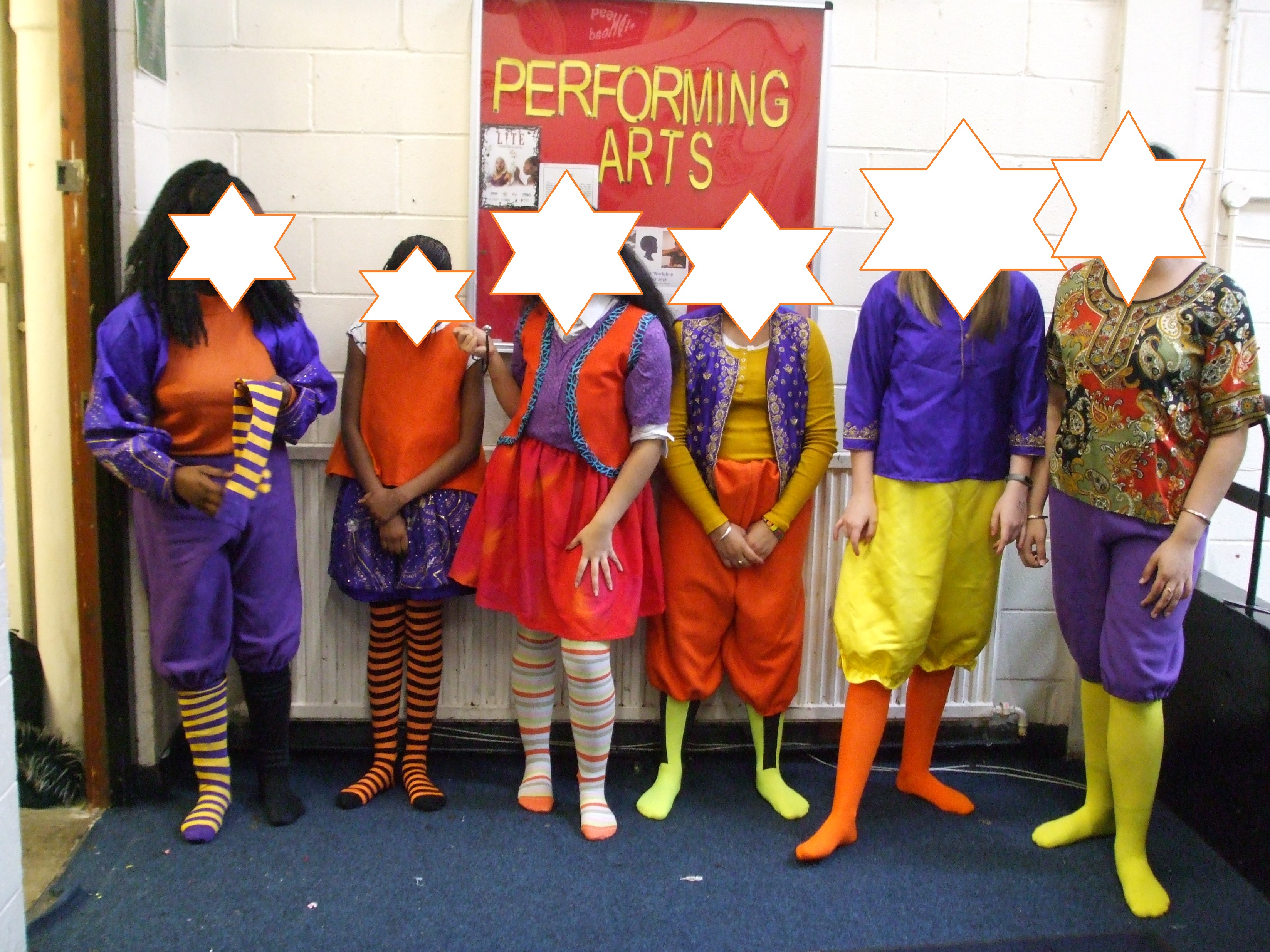 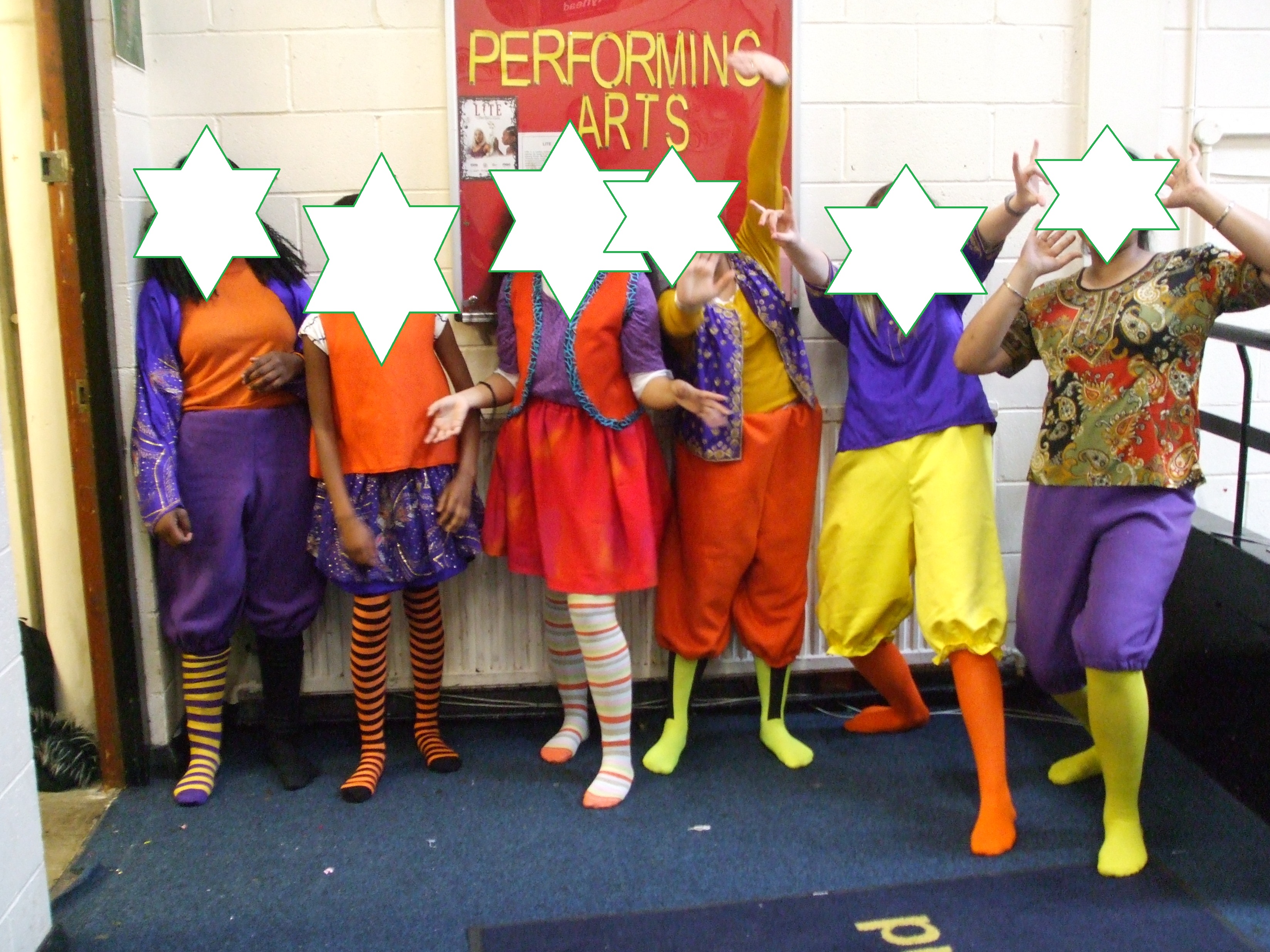 They now want to add pompoms, flowers, patches, and maybe hats.  That should be a madhouse….