Glinda the good witch- I decided that blue was the way to go simply because of the several miles of variegated blue dance net I’d bought a year oor so back to make a 1950s petticoat for myself.  Didn’t like the dress it was to go with, so there it all sat, occasionally exploding from any container it was in.  I also had [most of] two blue saris which were given to me about 15 years ago, and have done duty as various throws and backdrops for years.

I’d hoped to just make a single costume for the two actresses to share, but unfortunately, one turned out to be size 6, the other size 16.  Dammit.

I dug out the pattern I’d used to make a dress for my daughter a couple of years ago, as it helpfully covers sizes 6-16.  It’s a nice simple shape, French darts at the front, optional V back, and a hi-lo A line skirt or fuller options.  Useful! 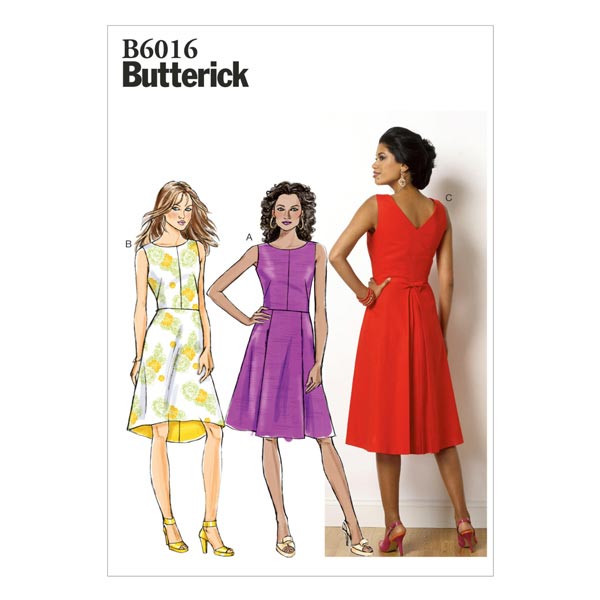 I did some rough and ready tracing and drew the bodice up in several sizes, as it’s versatile enough to also furnish base costumes for my tin woodcutters [also both girls] and the Wicked witches too.  More on those later.

I used this image as inspiration: 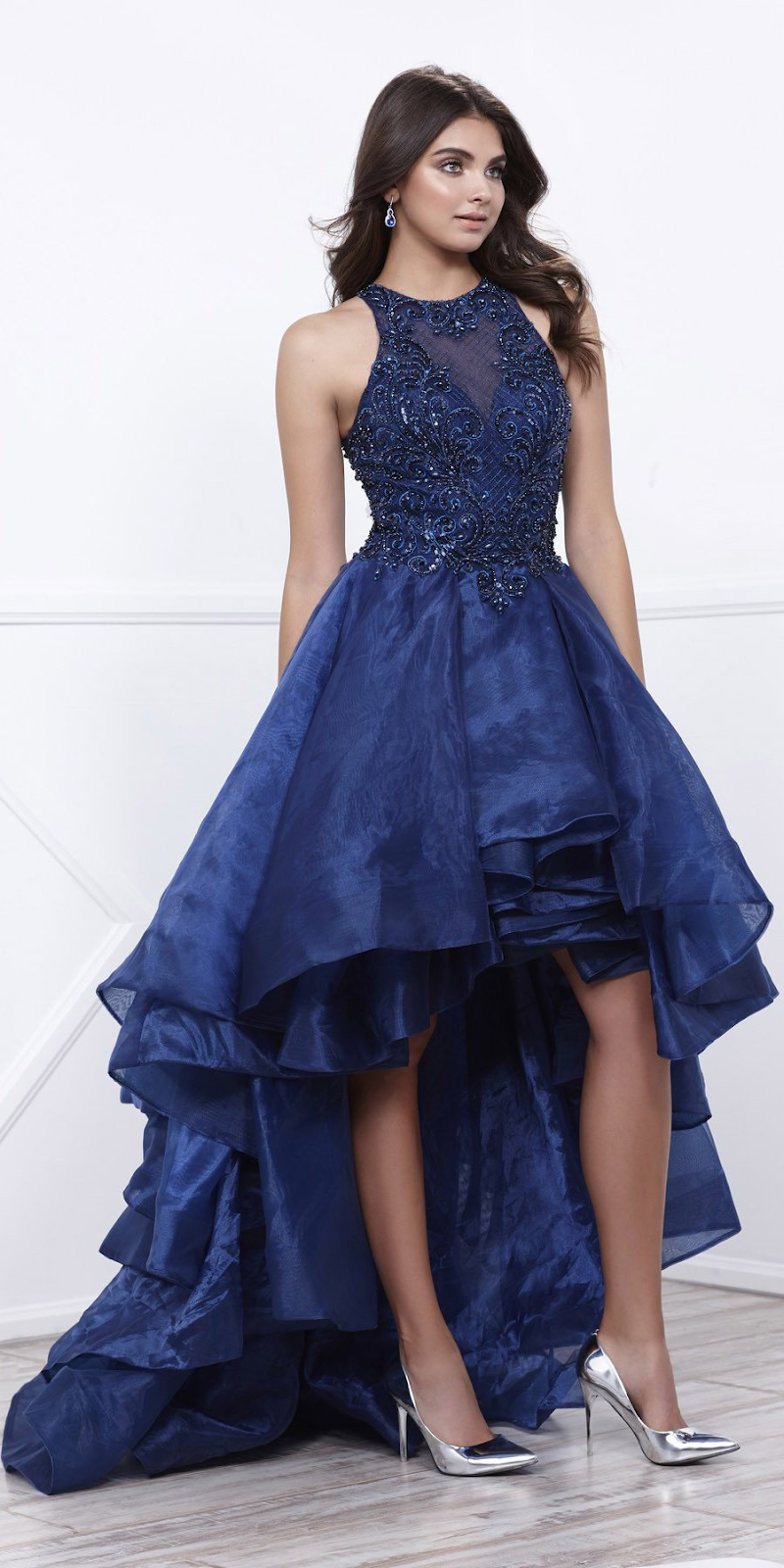 So I cut the whole skirt in some donated curtain fabric, , above knee at front, floor length at back [no trains as these are teenagers and space is TIGHT lol]  I eyeballed the back skirt, just checking length at side seams, and cutting a curved hem at roughly the right length, overlocking to neaten.

I divided up the saris and net into two piles, and managed to cut the bodices from the cobalt blue fifties dress I mentioned before.  the fabric was sold to me as ‘African cotton’ but it’s VERY polyester, and originally smelled strongly of chemicals.  Fine for costuming though!

I have to keep reminding myself that I’m making costumes for stock, so instead of clean finishing the insides, I’m underlining using old sheets [for ease of labelling, I can just write directly on them] and then leaving all seam finishes simply overlocked to allow for future alterations.

The dresses got whizzed together for a fitting before starting on the foof.  Random zips from stash, who cares if they match?

Fittings- bang on for the smaller girl, tiny tweaks for the other as she’s pretty short-waisted.  Home, all basted seams stitched, minor changes made, all good.  I left adding the flounces to the skirt until the long Bank holiday weekend.

Step 1- because the hem is high-low, I really needed  to line the back skirt as it’s visible in wear…but had no lining pieces big enough.  I found a weirdly random piece of ice blue satin and had JUST enough to mostly cover the skirt pieces with strips of pinked fabric whizzed on and slightly overlapping.  Good enough.  Then onto the decorative outside layers…

In retrospect, I should have applied the frill with the skirt flat, and finished the final side seam at the end of the process.

I divided up all the net and spare sari fabric into equal piles, and just winged it, trying to get a relatively pleasing arrangement of shades of blue, and fudging like mad to get all the fabric pleated roughly into position, pinning, and machining…all while trying not to catch in those tiers of ‘lining’.  Yeah well, easier said than done.  Much swearing, unpicking, and re-bodging.  I kept catching in those lining pieces, but not realising until I’d finished a section of course.

It got done in the end.

Fittings were carried out today, and all is good- girls and drama teachers alike were gobsmacked, and didn’t notice the alarming roughness of the sewing, as they never do lol.

I’d spent the morning with 6th form exam groups working quietly, so I basted together my tin ‘men’ for a lunchtime fitting.  And neither girl turned up.

They both look very pretty in the dresses.  Here’s a shot or 2 from today’s rehearsal costume call.  Hair, makeup and accessories [and in one case, shoes] not yet together. 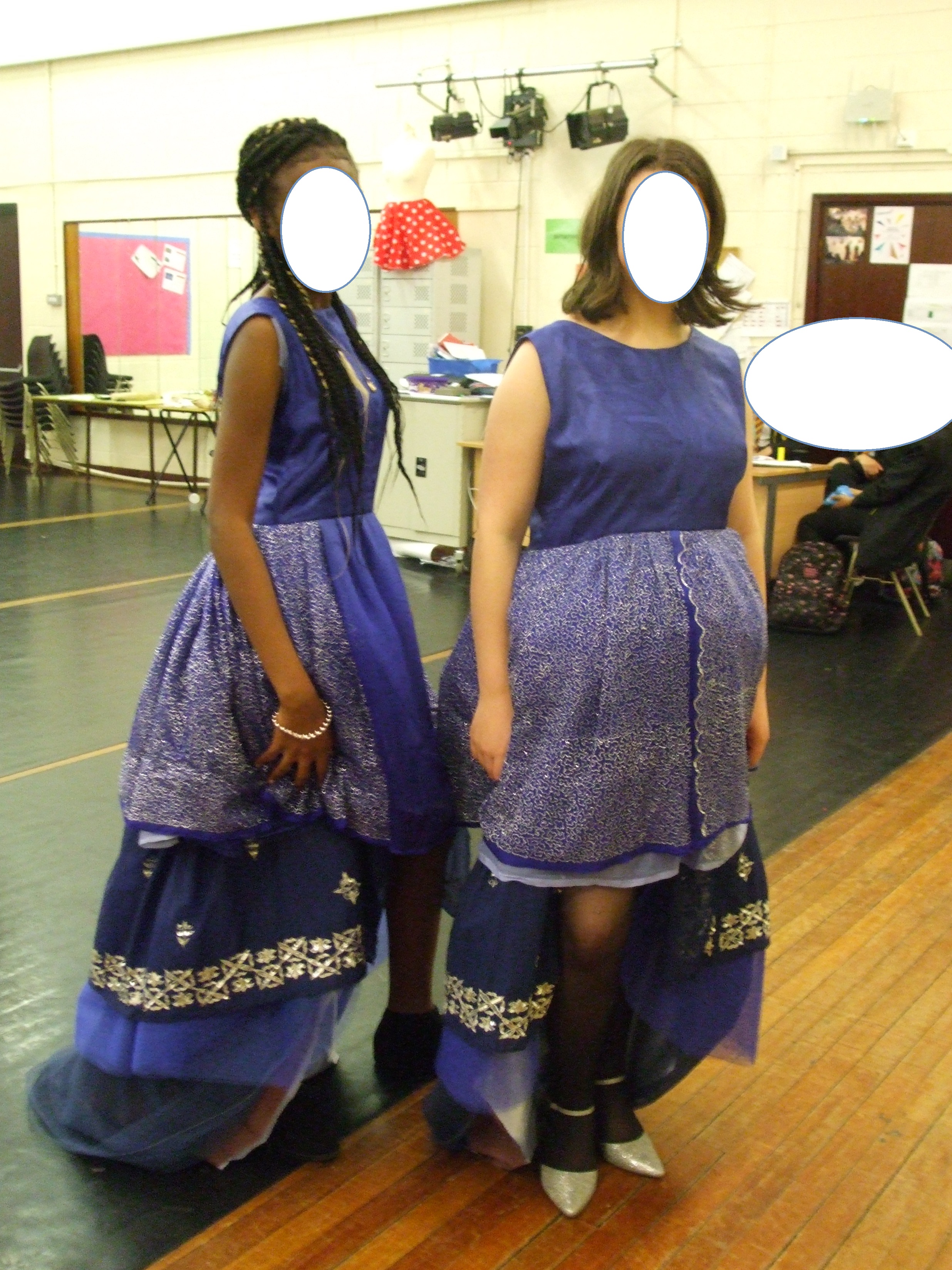 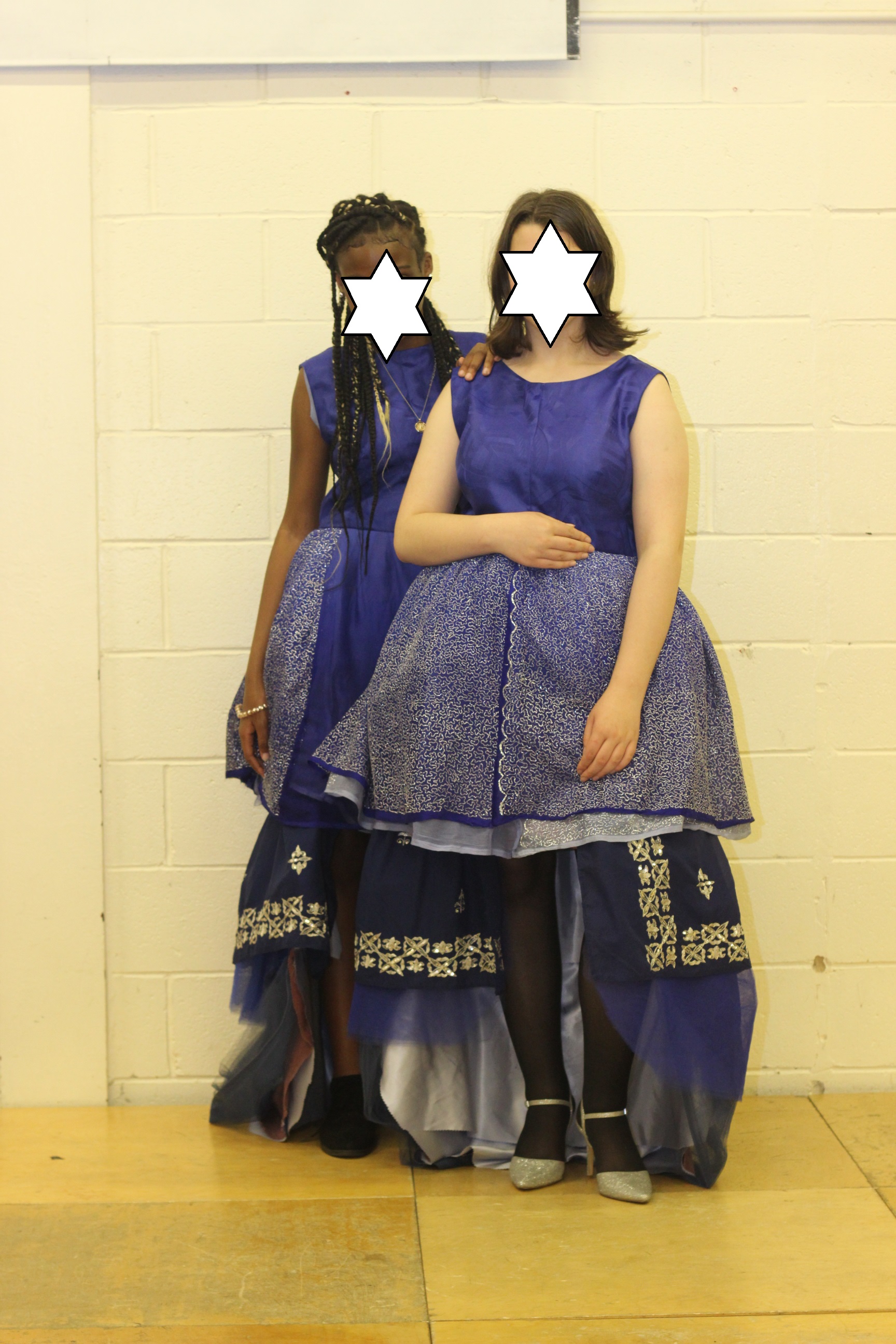 Just wait til they get their glittery accessories sorted!