The drama teacher had only supplied me with a few images to start me off, and she was very keen on the wizard having a gold cloak, like the one Whoopi Goldberg wears in ‘Ghost’.

While hunting in Barry’s warehouse, I found some fabulously liquid metallic fabrics, for only £2/m, one being this rich old gold colour, so I got 2m.  Extravagance!  [I used the gunmetal silver for the tin woodcutters of course]

Rummaging in the props cupboard turned up a couple of smaller remnants of gold brocade, I ordered some extra sturdy interfacing and some craft foam, and was ready to go.

I free cut a sort of circle from the interfacing, which is practically cardboard in weight, large enough to extend out on the shoulders by several inches [might as well make the Wizard look intimidating, I still don’t know what the scenery/props arrangements might be, so worked on the principle of making the costumes do all the work]

I reinforced the shoulders with the craft foam, and glued it on, the overlaid the red/gold brocade, cut to size, and basted it round the edges.  I used scrap fabrics to cover the underside, and glued it on for speed.

The liquid fabric was ample to make a simple garment to cover the entire body and conceal the arms, as I wanted to end up with something not actually looking much like a person at all!

I found this amazing website, ‘The Cardboard Kingdom‘ which has brilliant self-assembly masks for sale, and they had a couple which are free!  I sampled ‘the beast’ and ‘the dragon’s head’ and we all liked the dragon best, even though it’s not meant to be worn, just mounted on a wall.  I found some gold pearlescent card on eBay, and chose to enlarge the model and work out some sort of wire internal support to make sure it can hold its own weight and be worn.

Under all of this, the wizard is of course Professor Ozmund.  I found some clothes in the props cupboard, including a gold waistcoat, which I included to show his salesman flashiness, and also hint at the Wizard costume to come.  I tried to do this with all of the Kansas characters to some extent:  Aunt Em wears blue when she returns as Glinda, Uncle Henry and the Doorman to Emerald City both sport bow ties, the scarecrow wears a straw hat in the Kansas scene, and so on.

Shirt and scarf from stock, waistcoat was a jacket, so I took out the sleeves, and the trousers were made from scratch.  the flared sections are half-circles from a scrap of tie dye fabric I unearthed, the ‘braid’ at the knee was leftover from making the upper cape for the Wizard outfit.

Despite hundreds of pics being taken, I don’t have a good one of the wizard in full costume, which was gold robe, brocade cape and gold mask.  However, you can see ‘his’  assistant holding the mask to one side.  That brocade cape was stiffened and padded to stand out really wide, but she kept wearing it back stage and it buckled, so I had to make weird emergency wire supports, which weren’t 100% successful lol.  Not to worry, it worked well enough! 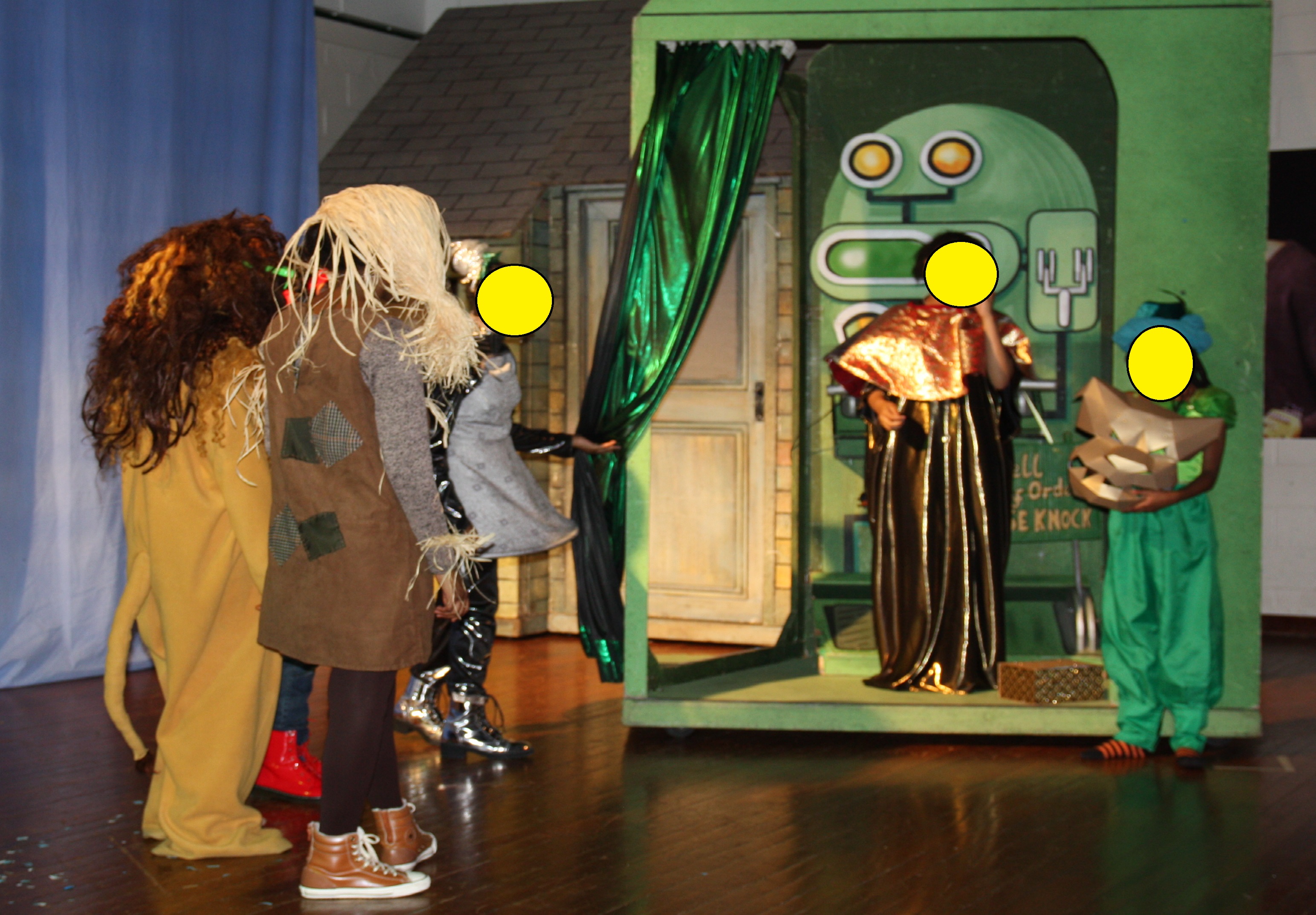