…and crows and owls and mice and and and….

So many last minute and ‘small’ roles had to be sorted, some I’ve mentioned along the way.

The three masks took me about four hours to assemble, as they are quite detailed.  The ‘leather’ jackets were from stock, previously purchased for a production of ‘Grease’ so I had to unpick the Tbirds patches from the backs.

The kids loved these, and happily took them home after the show.  It was MURDER [get it?] trying to stop them over-handling these during the rehearsals and shows, so they would stay intact! 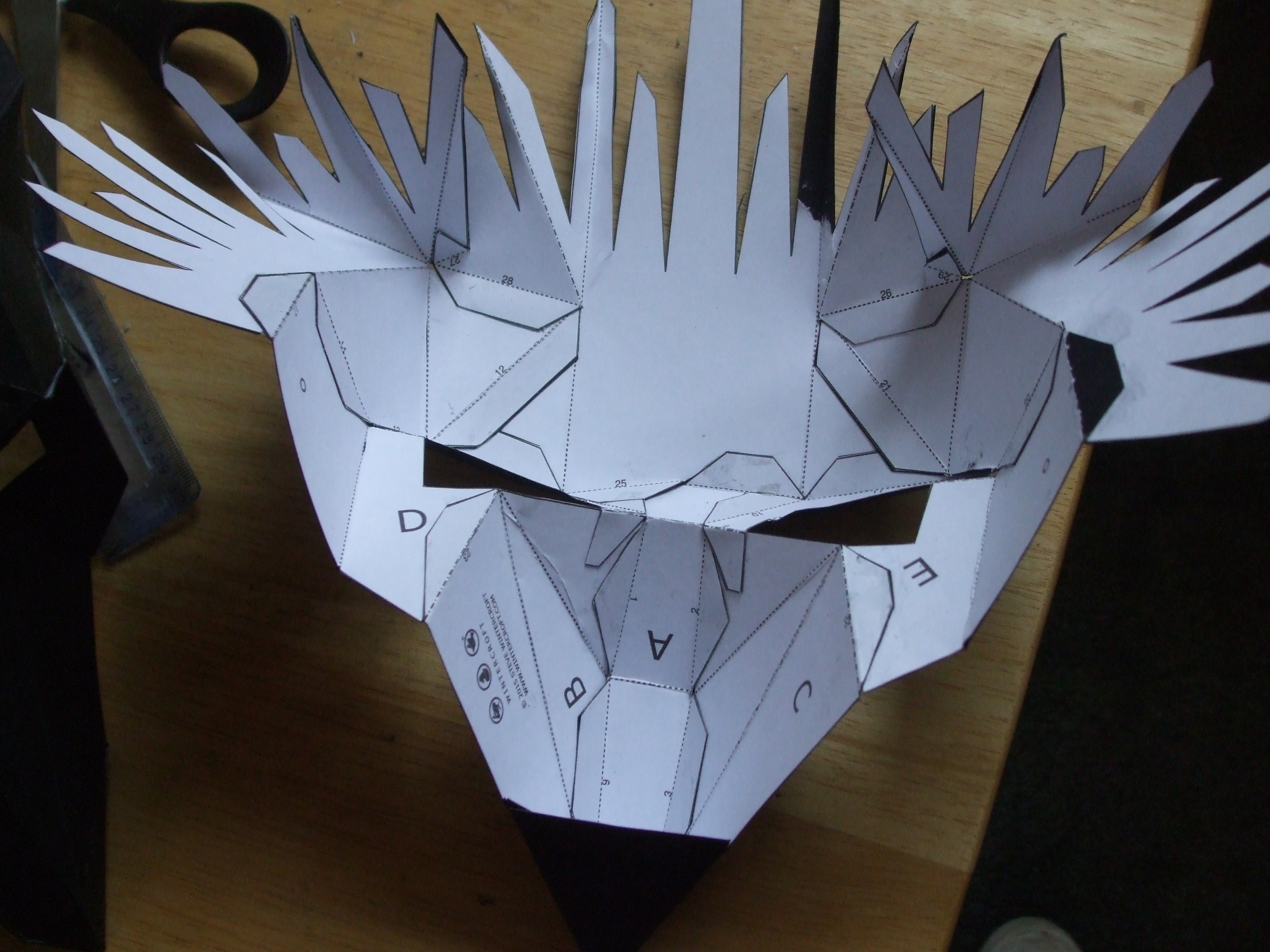 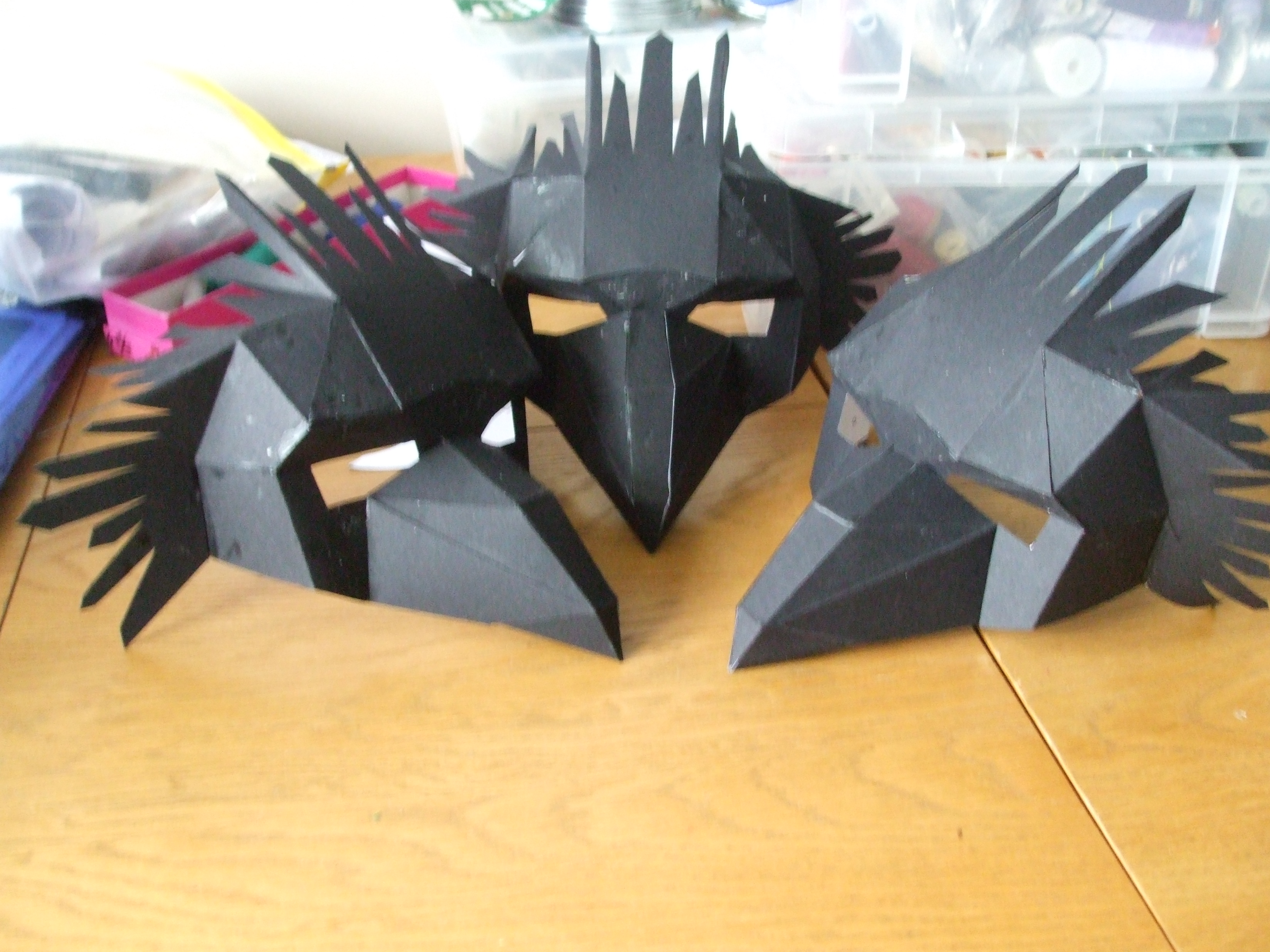 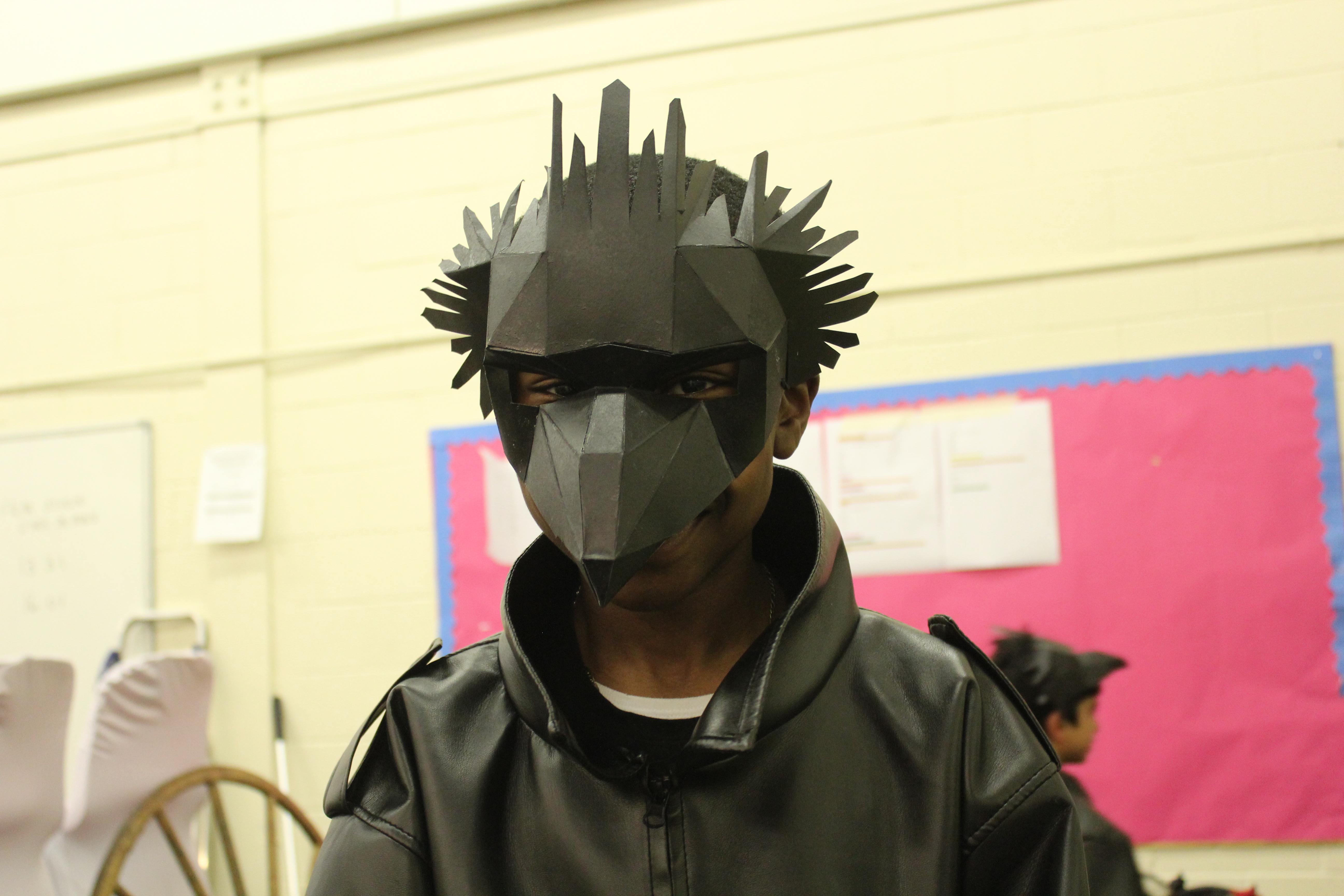 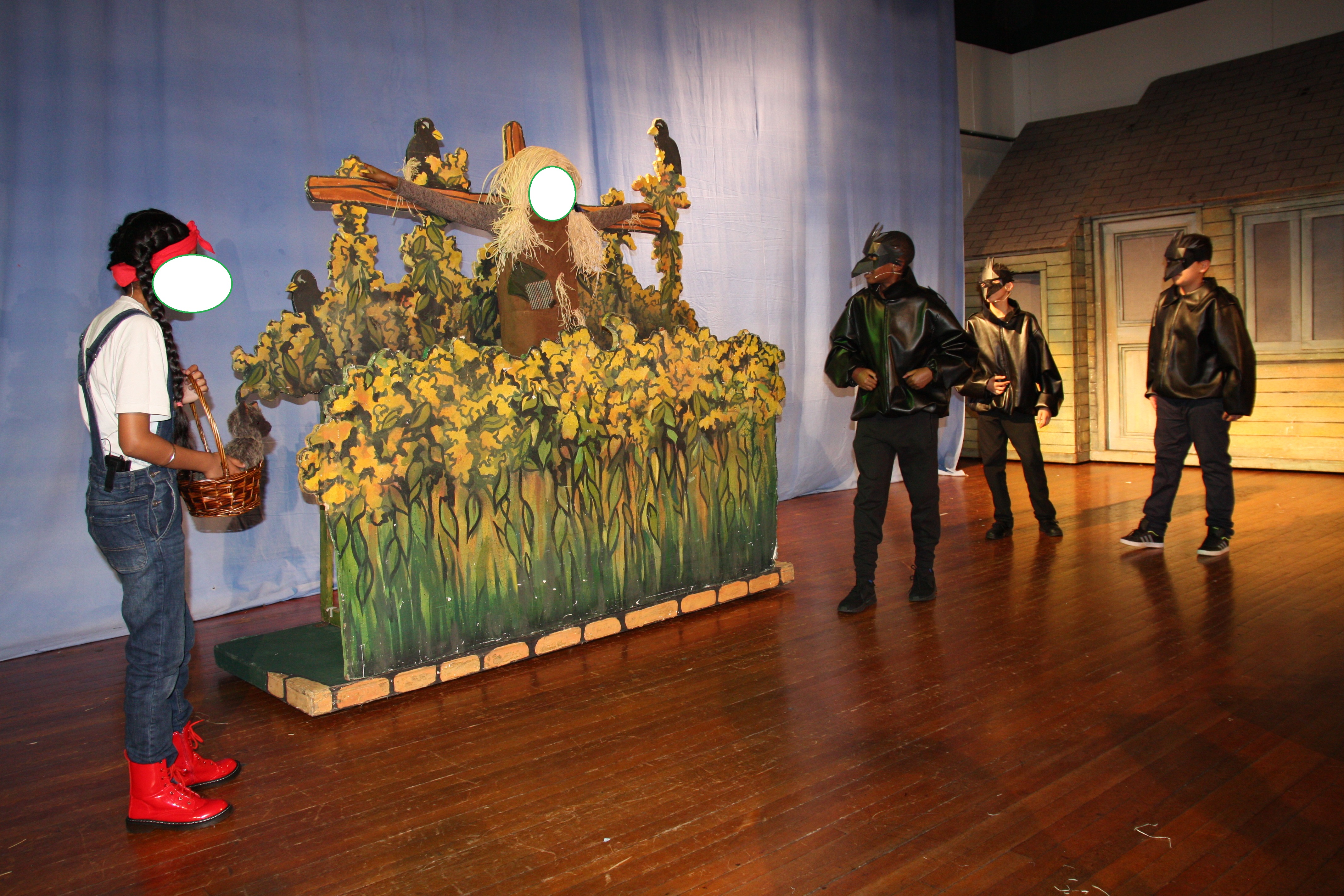 Mice- I made these masks from felt, copying an image I saw online.  I backed them with very heavy interfacing and craft foam.  Again, I had to do some careful watching to make sure the kids looked after them between wears so they would last through the run! 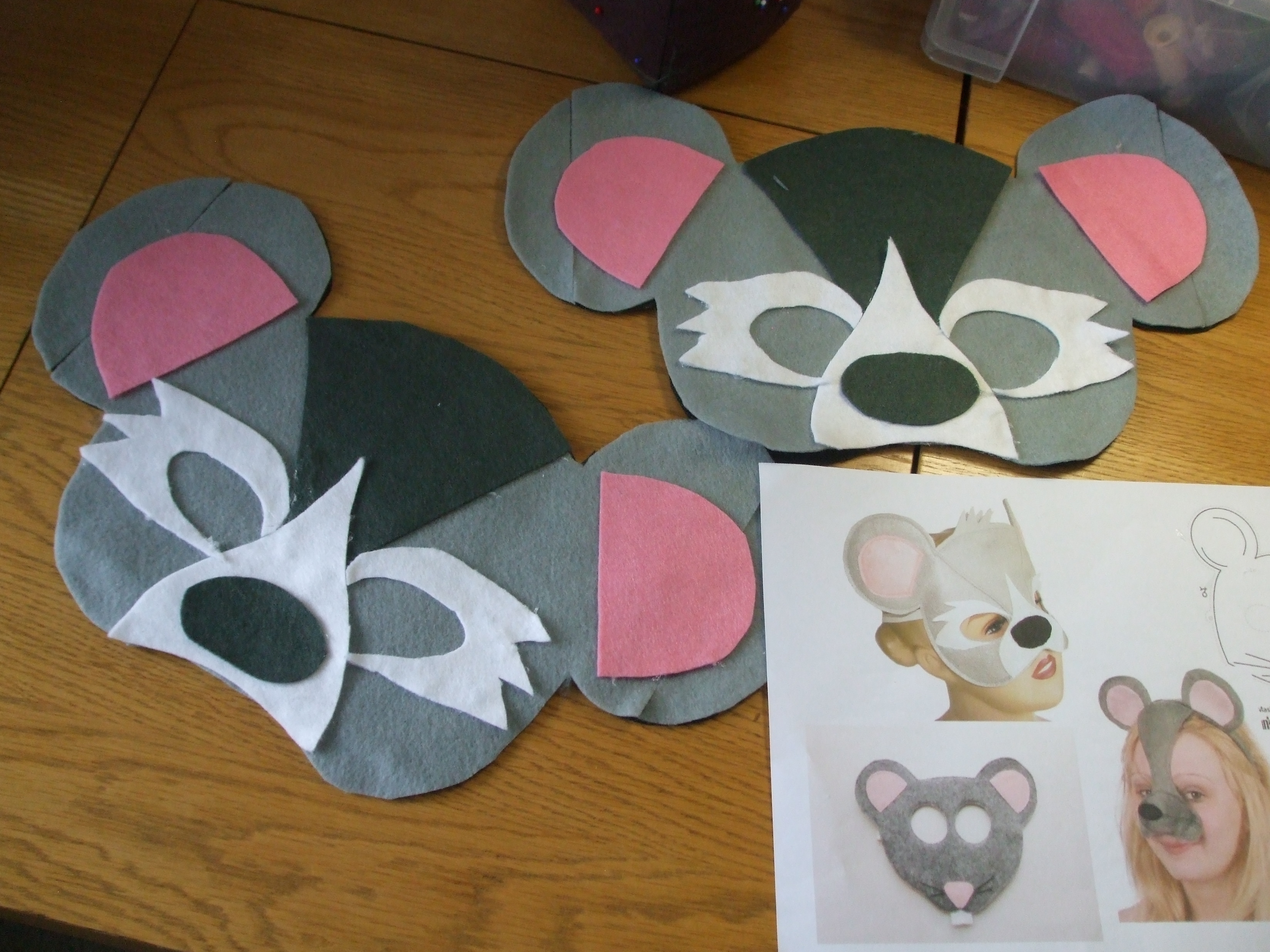 Grey hoodies and one pair of leggings from stock, the other pair was made from a grey t shirt dress from stock.  Tails we already had, but they were limp and so I restuffed them and added some wire.  MUCH better.  These characters were amusingly naughty and stroppy, the audience loved them! 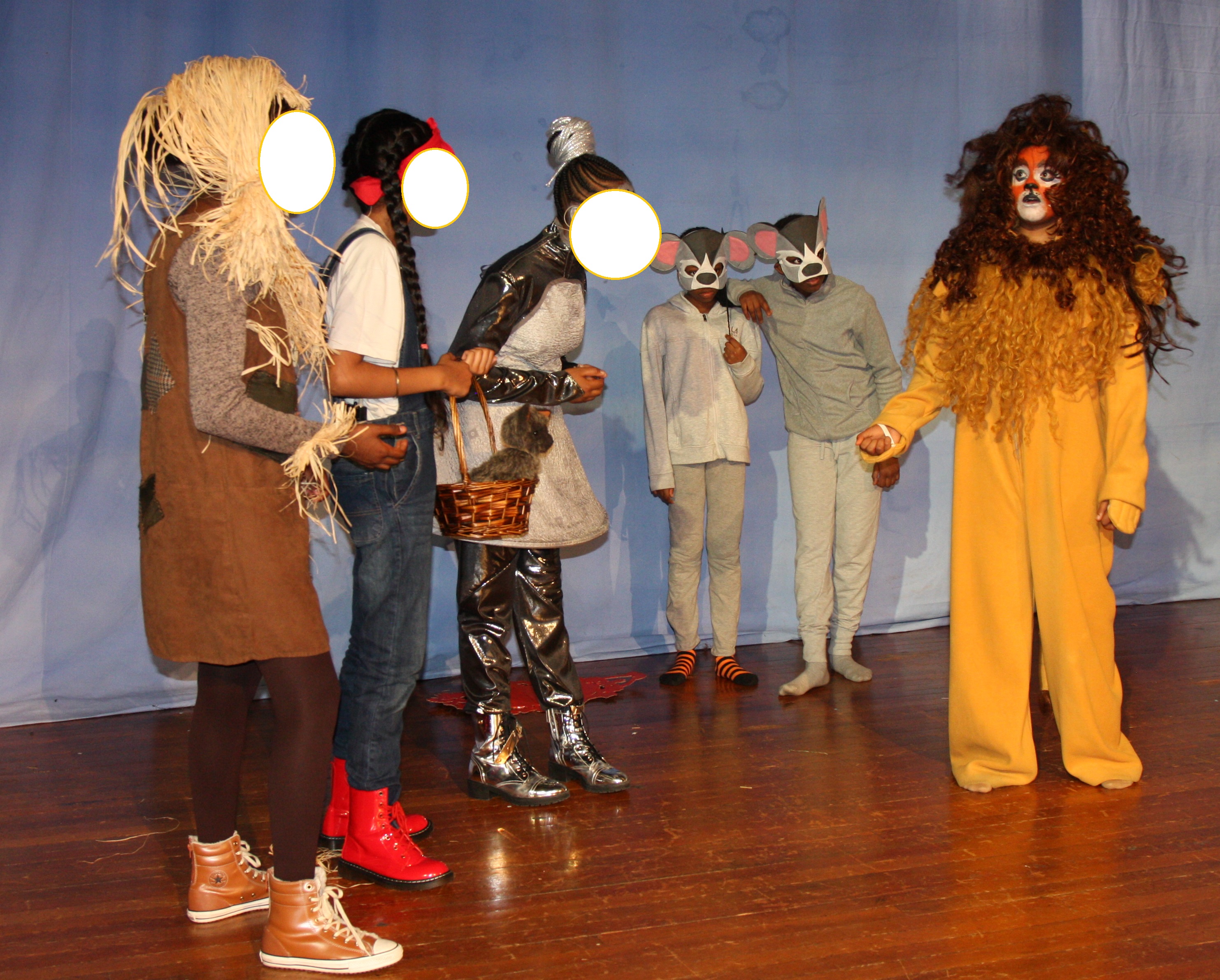 Owls- these sort of stood in for the talking trees in the film, throwing MANY apples at cast and audience alike.  They were a hoot! 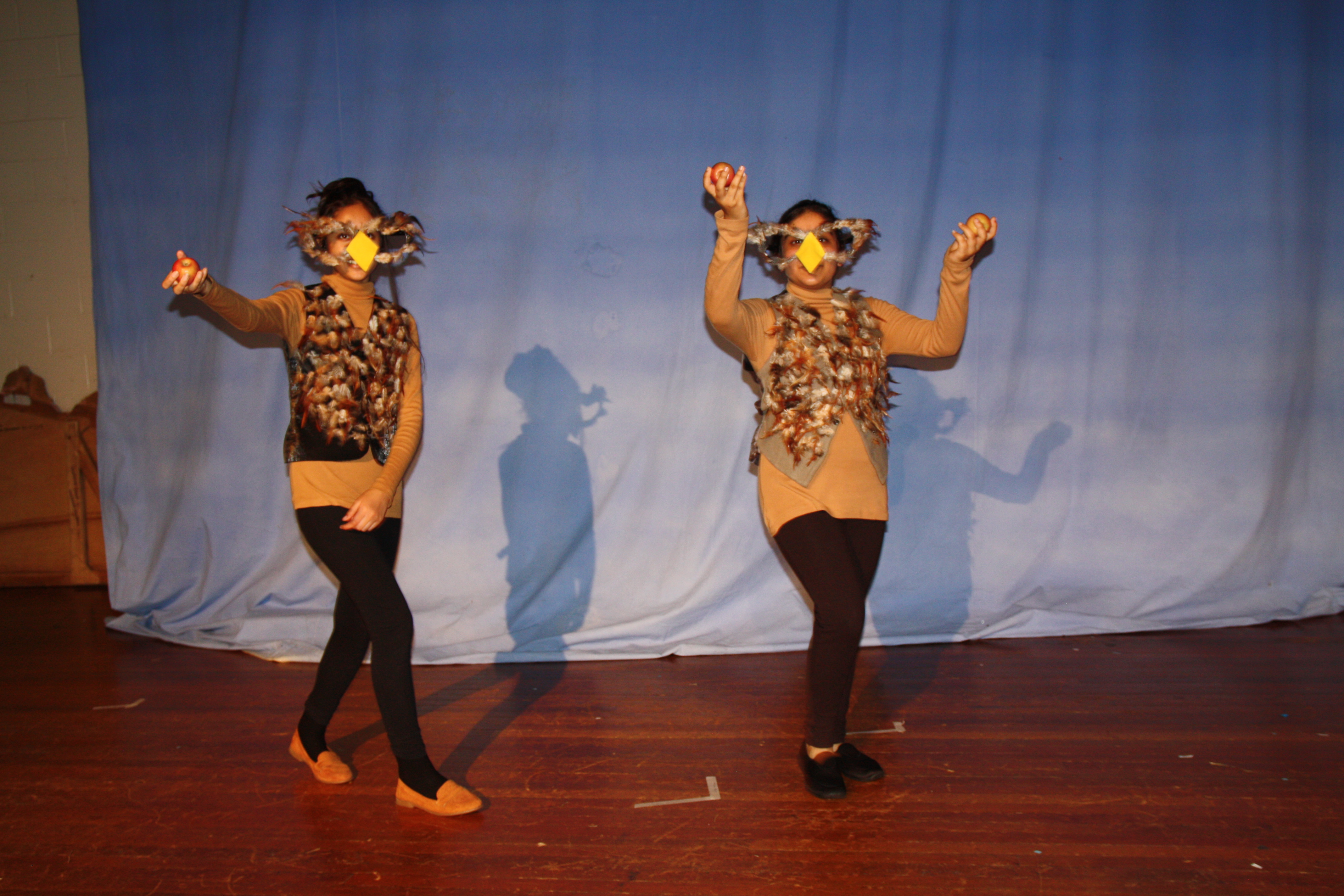 The doorman to Emerald City was fun.  A big lad, and I found a TINY tailcoat in stock, so had to add several gussets as well as removing all the lining and padding to make it fit.  The waistcoat was also from stock, I just tacked on some green fabric to cover the front.  Lapels, button covers and stripes were made from some emerald green lame scraps leftover from one of the Emerald City Girls’ trousers.  I’m cursing because I took a great picture of him from behind, showing all his fabulous Beetlejuice-inspired stripes, but I can’t find it!  Maybe later lol.  With the green sunglasses, he looked very cool, a perfect doorman. 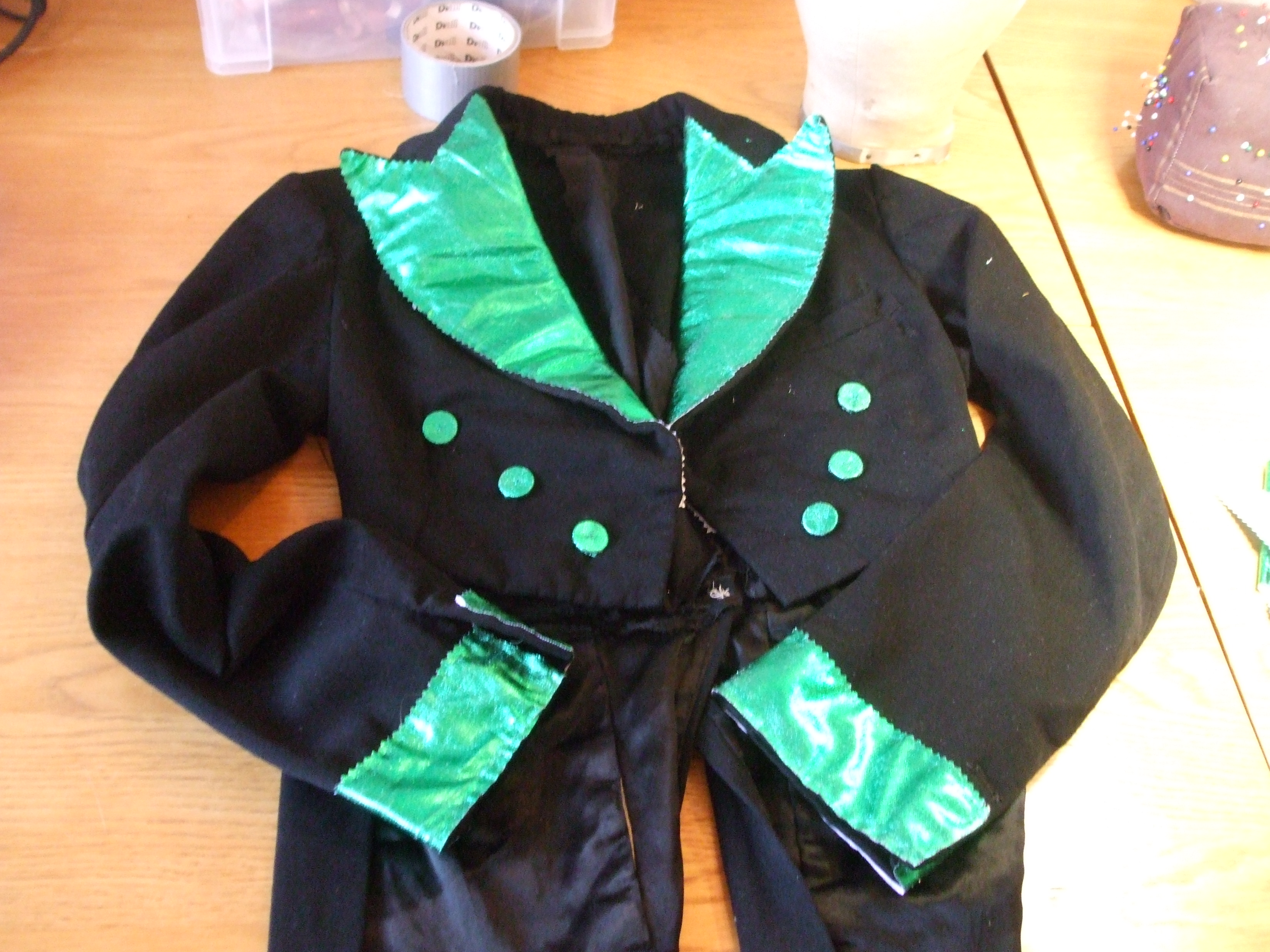 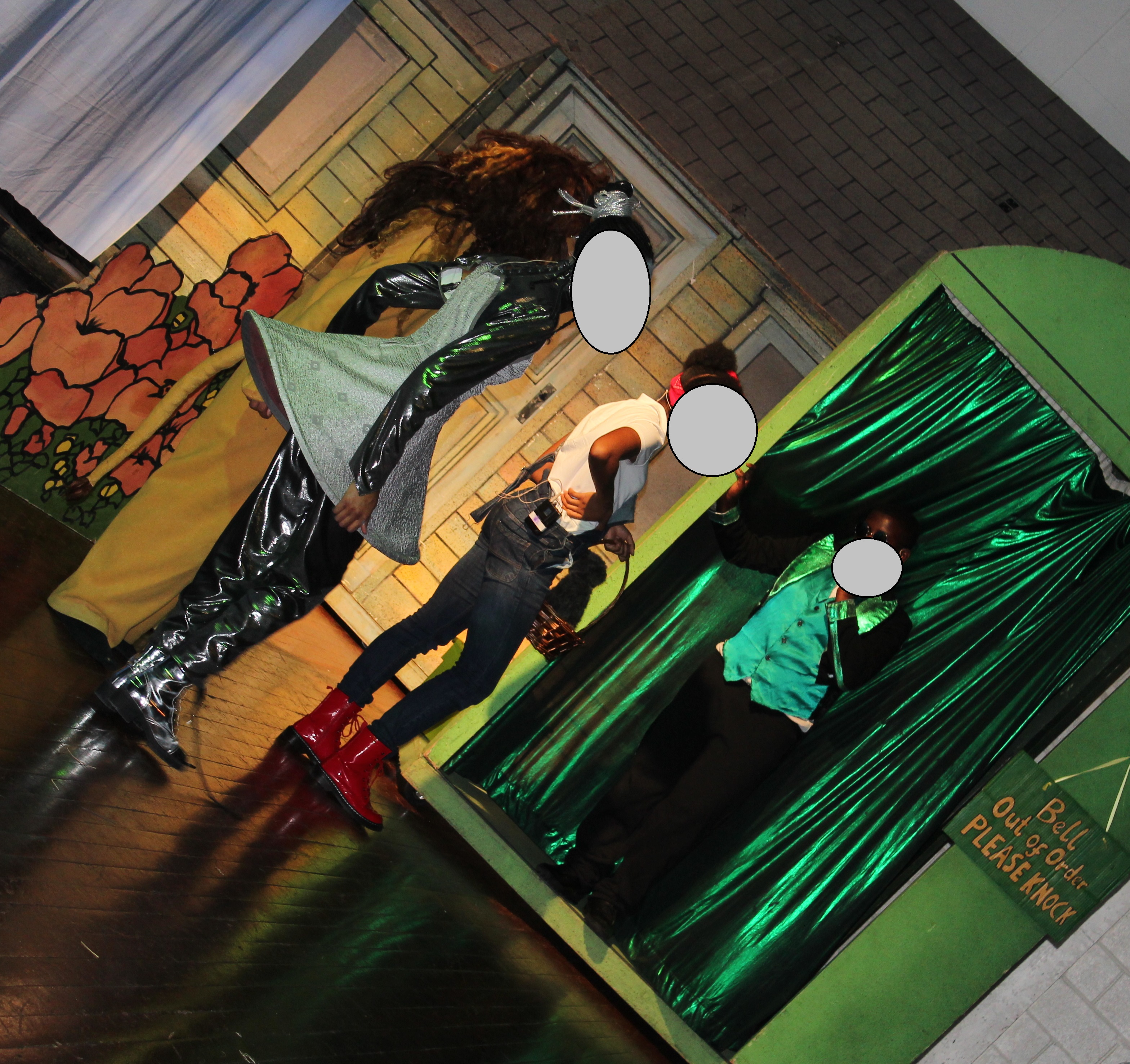 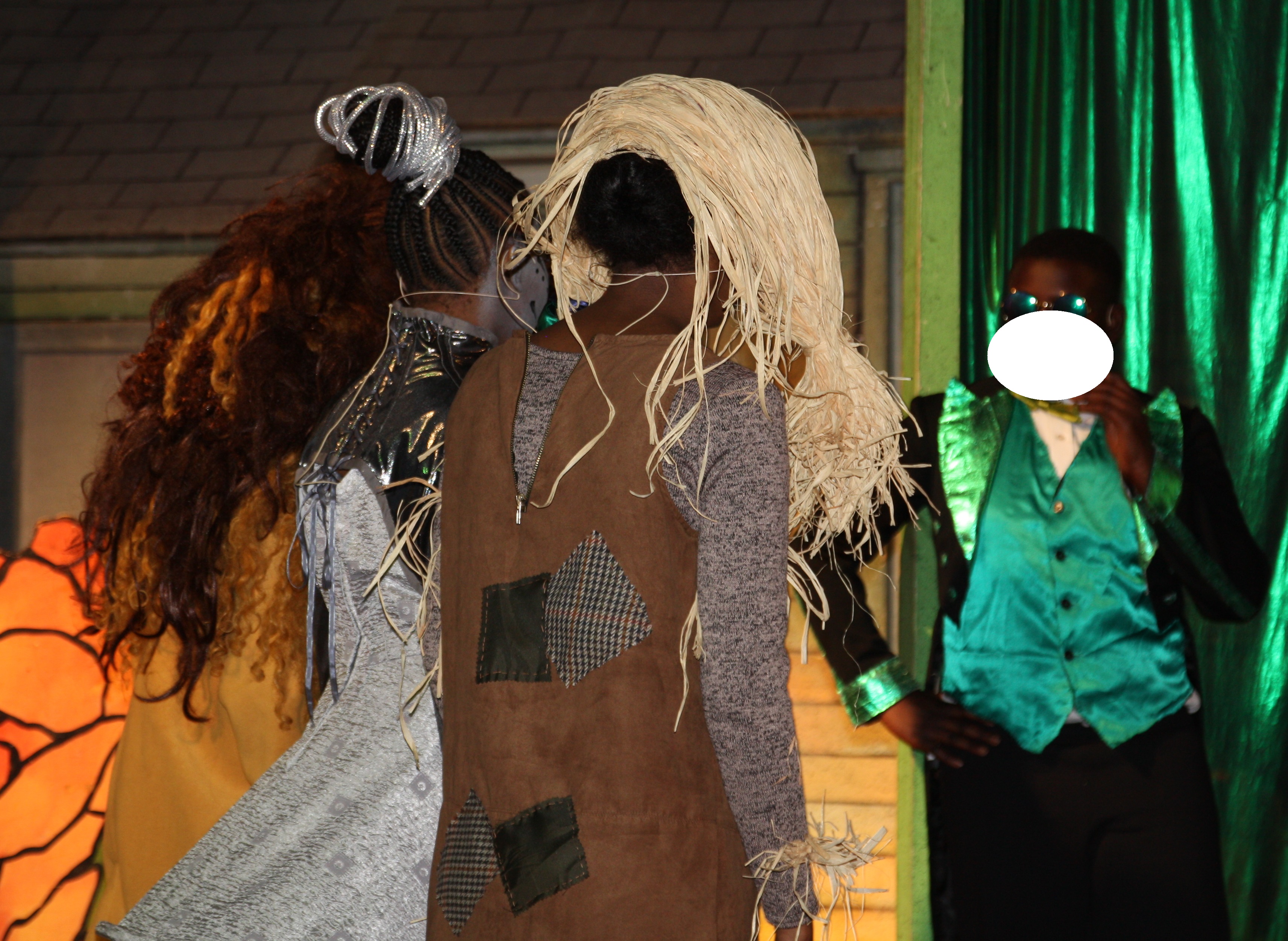 In all the pics of the flying monkey, you can’t see his tail, although it worked really well.  The lad playing the role was brilliant, a proper little Andy Serkis!

One of my other last minute jobs was making him a ‘torch’ to set fire to the scarecrow.  The missus stepped up there, finding a garden spike thingy and adding in a flashing red light from a torch, I made cellophane ‘flames’ and we were done.

Other last minute tasks including making boot covers/spats for Dorothy to cover her red boots until the magical changeover in Oz, the ruby slippers for the dead witch’s corpse, the corpse itself [some ingenious origami with a fat suit from the back of the props cupboard]. The kids were delighted with the boot covers, saying they looked like Uggs! 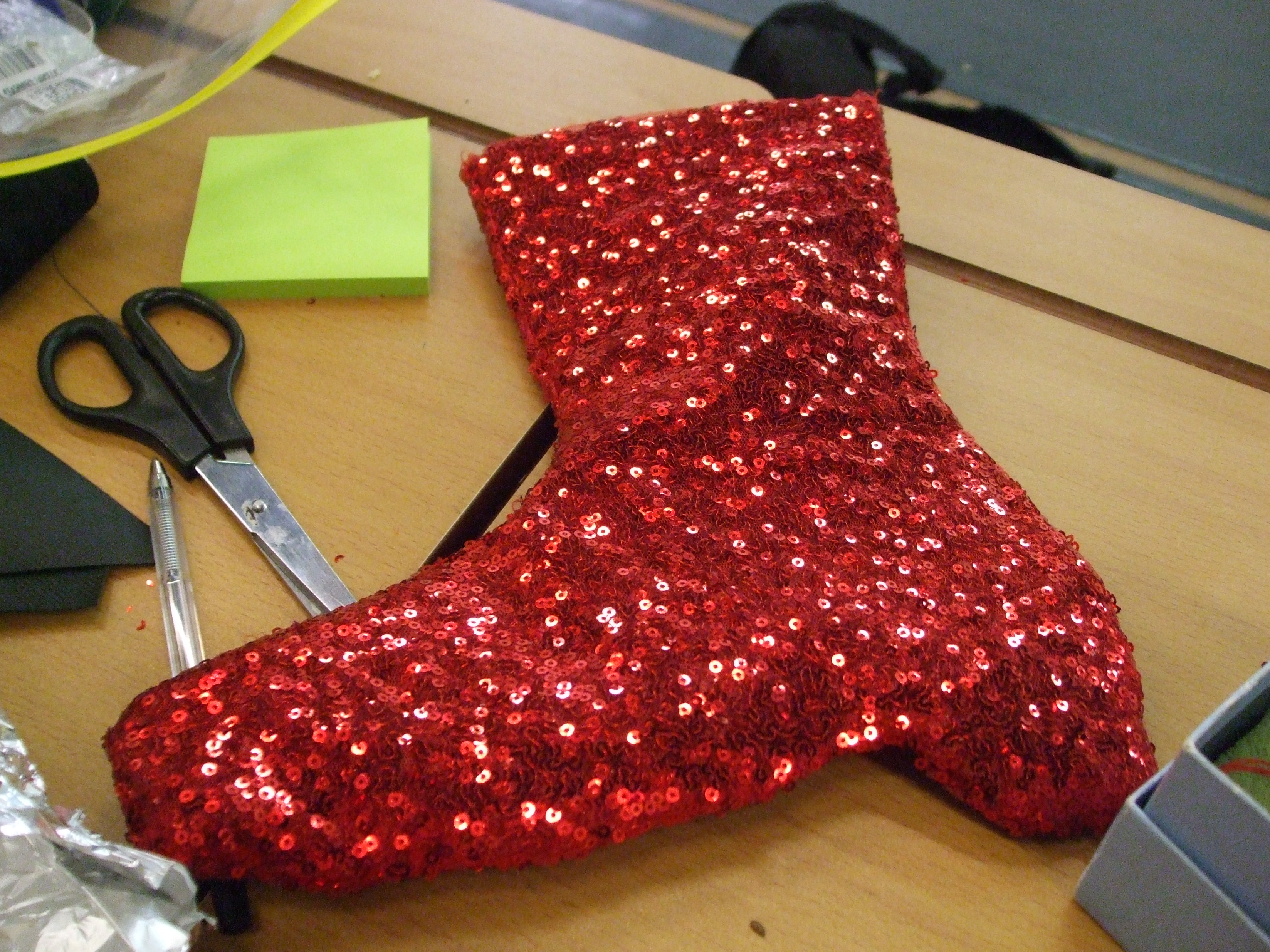 The witch’s guard caused me grief, but I had to let it go or throw a wobbly, so I let it go.  I was assured there were 5, so having found [and washed and dried] matching  FIVE camo trousers and FIVE T shirts, I set about getting some printer transfer paper, designing a ‘WKD security’ logo [get it?], printing FIVE and appliqueing them to FIVE ‘bibs’…yes, they started rehearsing at the 11th hour with SIX guards.

Then the girls decided that as some of them had their own camo trousers they would wear them instead, and they also swapped up the t shirts.  They had been SO good with all their other costumes [more or less] so this was annoying and baffling that they should get to a UNIFORM section and mess it up.  AND they only ended up with a couple of the bibs on so it was a wasted effort.  And that transfer paper isn’t cheap!

The show had to go on, it did, there was no business like it.

The audiences loved it, even the little kids watching seemed very impressed, and I’ve been getting gazillions of thanks and much praise.

I may already have my next costume gig lined up, more on that next week!