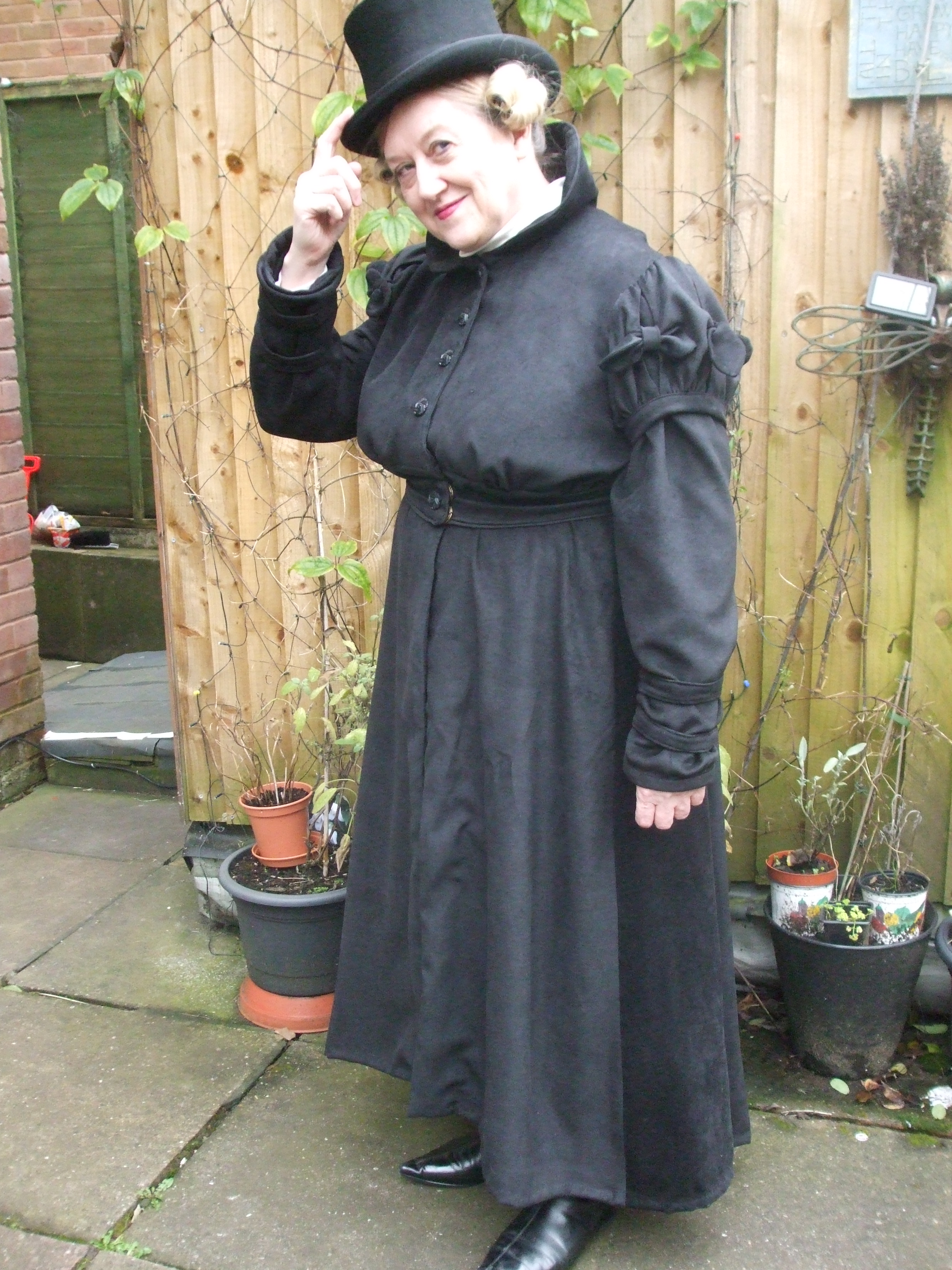 I used Laughing Moon #137 pelisse pattern, and of course chose the most complicated option.  The fabric is a fabulous Italian designer cotton blend stuff [see earlier posts] with a velvety surface and  a swooshy swishy crepe like texture.  The sizing is pretty good- I used the correct one for my bust, and adjusted gathers, pleates and belt length a tiny bit to go round my girth.  It actually fastens round my ribs so the belly is not as disastrous as it might be! 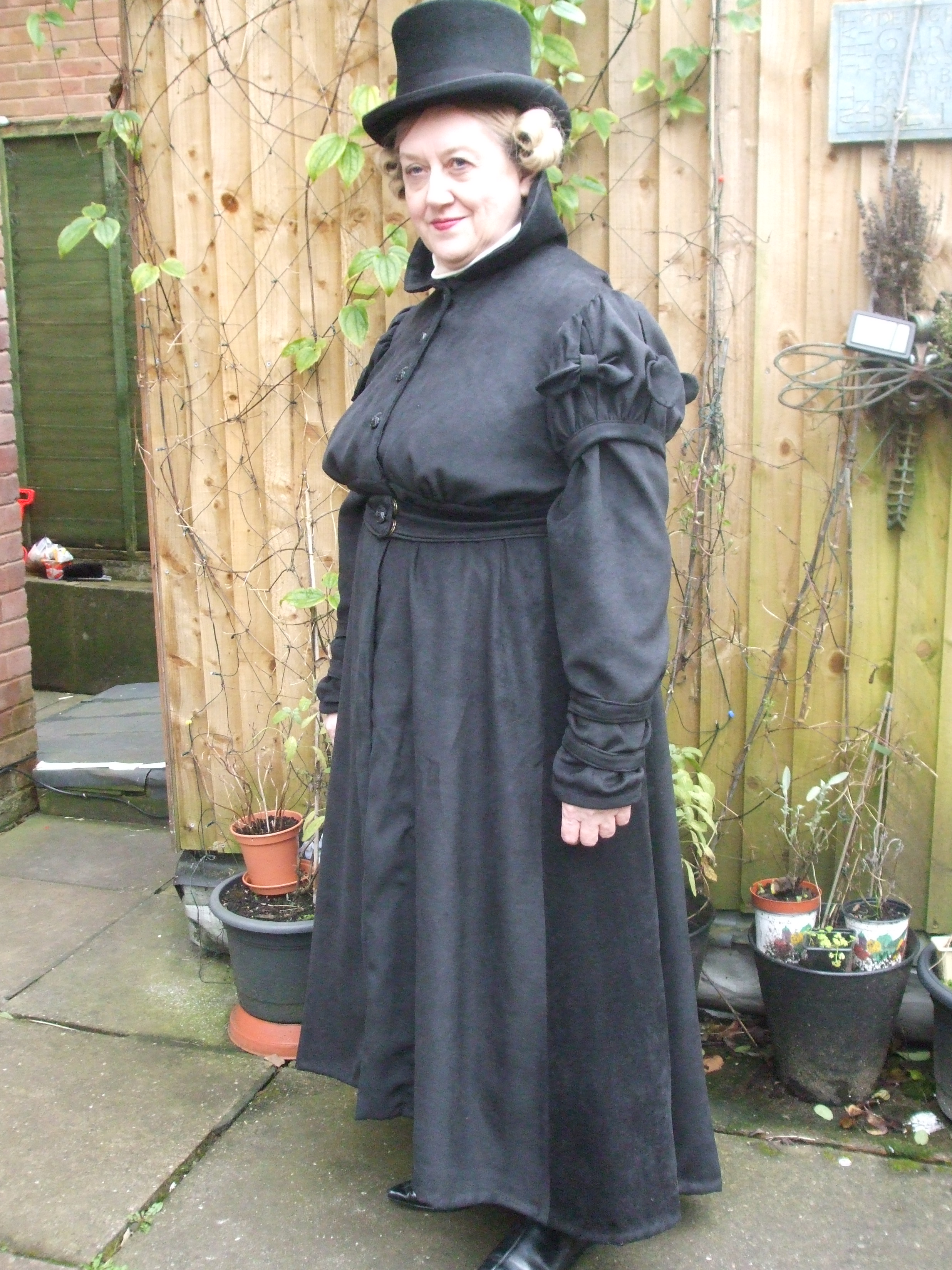 I lined/underlined the bodice and sleeves with a remnant of slightly stretchy black satin, and the skirt with what was sold to me as a stretch poplin- VERY stretchy and rather limp.  It was originally meant for my cathedral dress, but it wasn’t any good, so I abandoned it.  All things have their time! 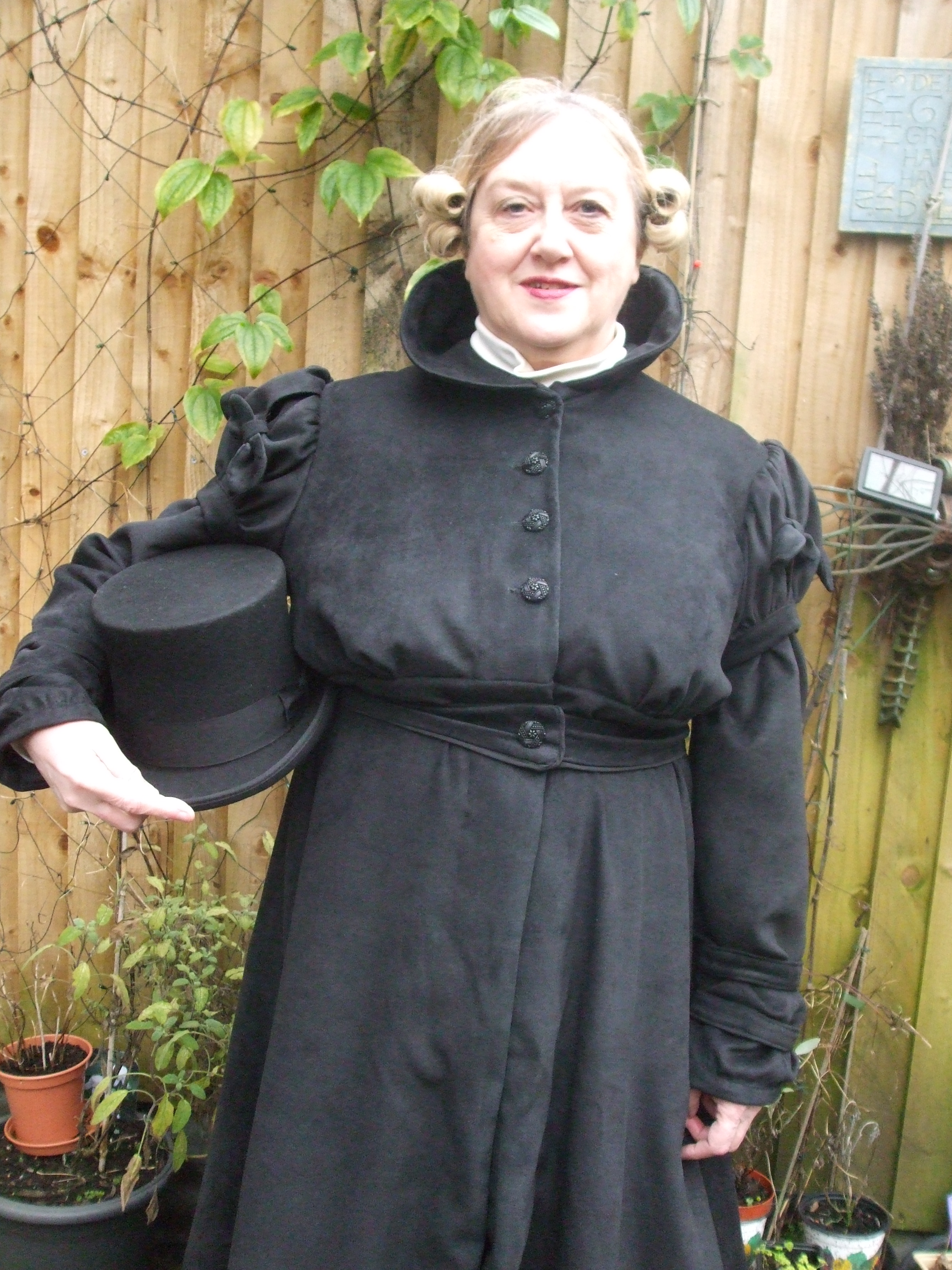 The sleeves are double- a ‘slashed’ and be-bowed puff sleeve over a longer one, banded at the wrist and forearms. 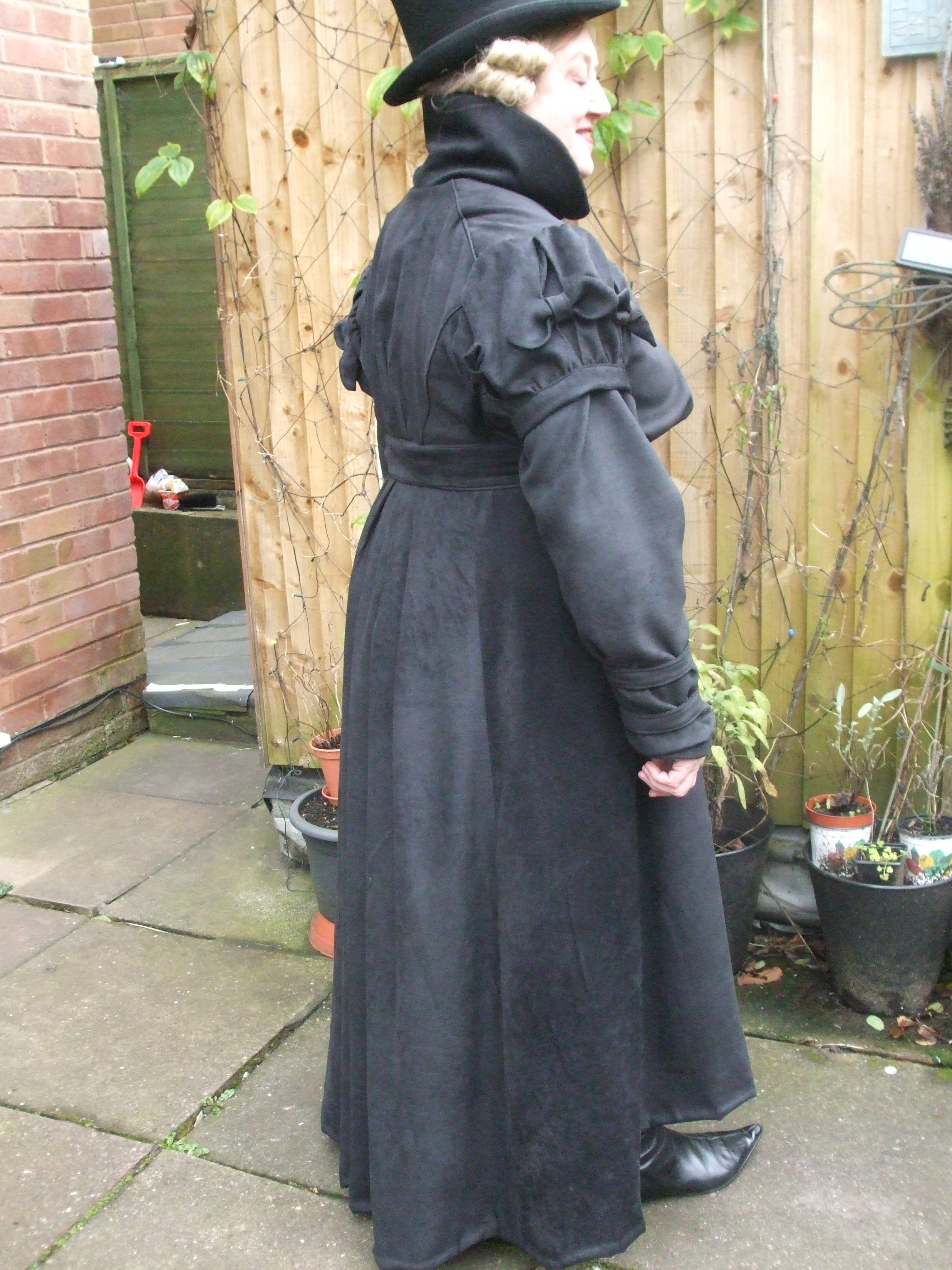 The bodice is slightly short waisted, piped at the back, and the skirt is pleated onto the gathered back waist.  I ditched darts in favour of gathers, but retained the dart length, just rounding it off.  Worked as an FBA!

Lots of thicknesses round those armholes.  LOTS.  Lots of hand sewing to get a relatively clean finish inside. 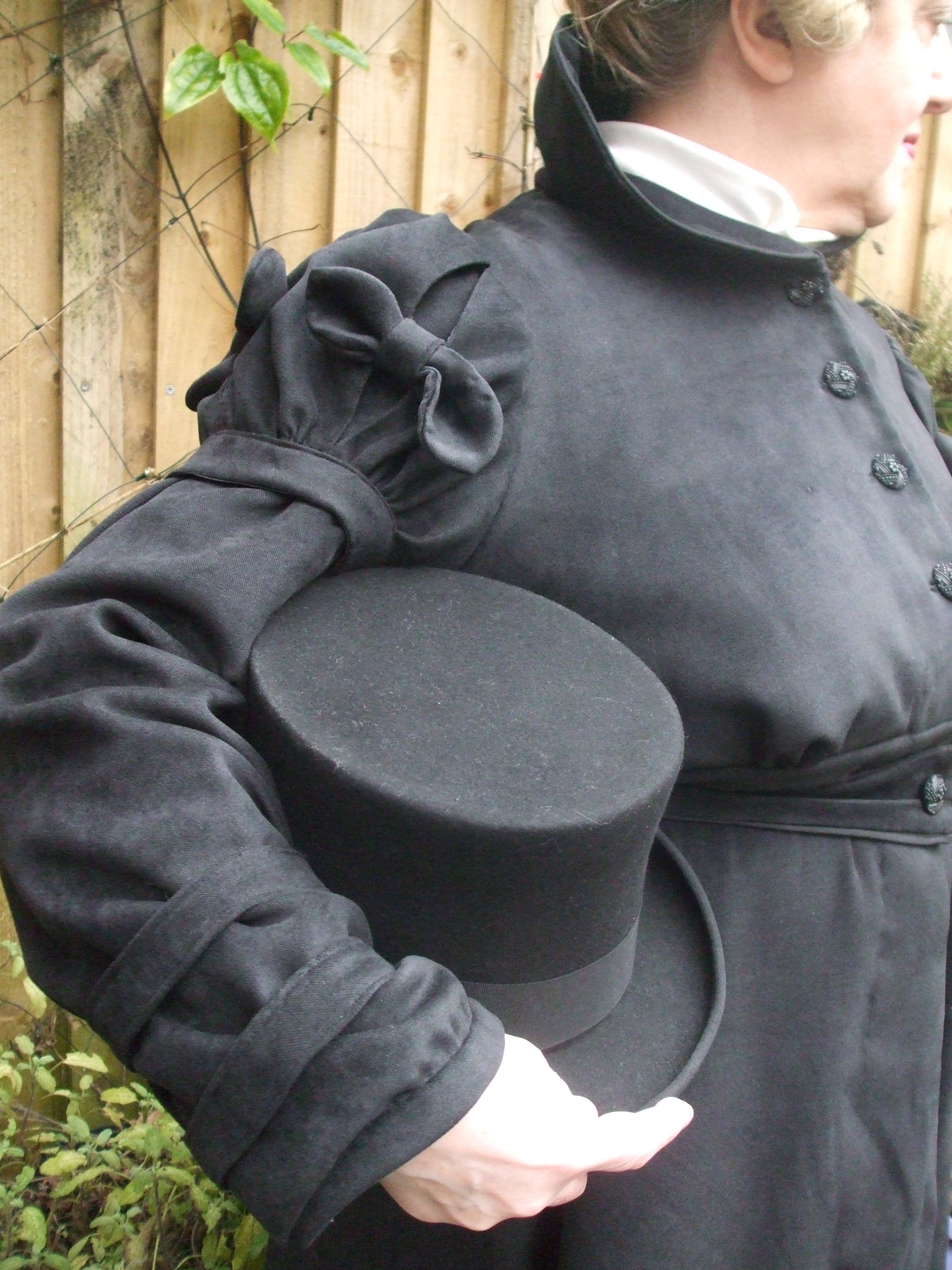 The buttonholes fought me, but I got there.  The belt [with very shoddy piping, don’t look] is attached at the back only, and I used two giant snaps to fasten it, with a camouflage button on top.  The buttons are fake carved jet, reclaimed from an earlier project which was never worn [The Sense and Sensibility 50s dress, if you want to look back *shudder*] 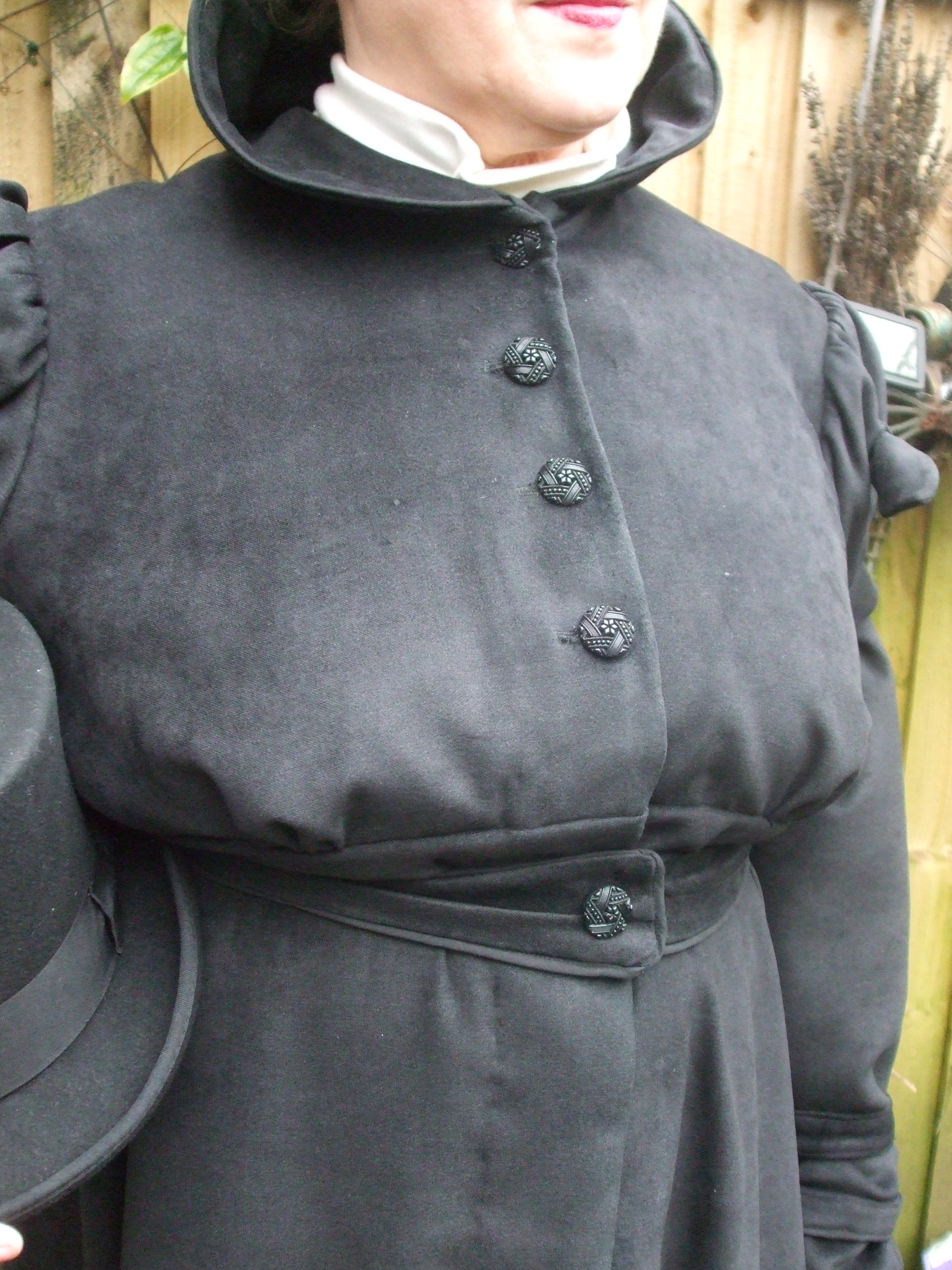 I added 2 more smaller black snaps to close the ‘skirt’ over my belly.

The whole ensemble was worn over my SWAP collection full black linen skirt, and the SWAP polo neck jumper with bishop sleeves.  I would have loved to have finished the SWAP waistcoat too, but hey ho.  It’s cold today, I largely stayed buttoned up anyway! 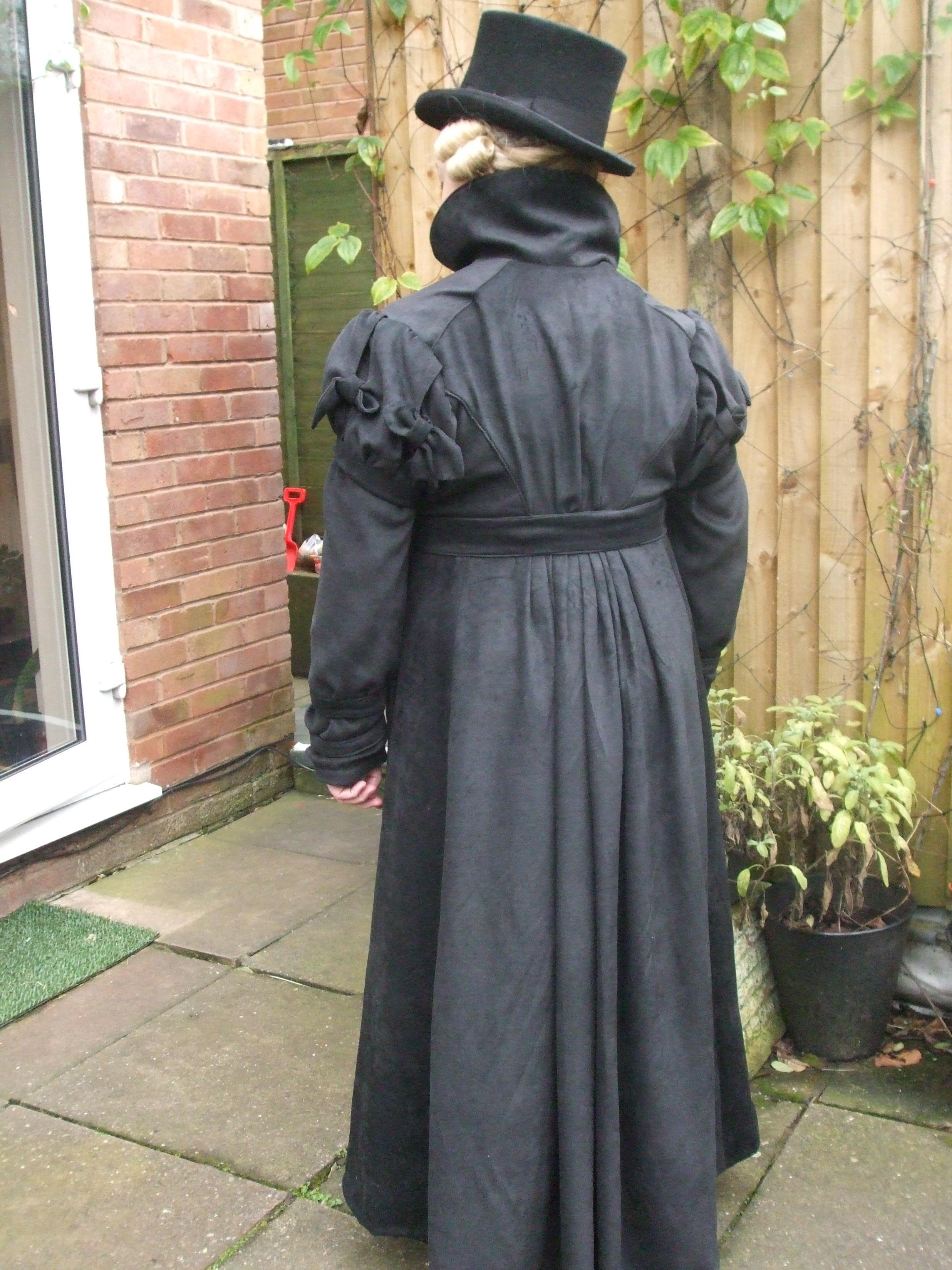 My only disappointment in this pattern was the ‘standing collar’ which doesn’t despite serious interfacing.  When I have time I will wire it, as I plan to wear this to a steampunk outing or two…I’ll need to get my own top hat though, I nicked the wife’s and she has a much smaller head! [PS After writing this, and coming home to take pictures, the collar decided it WOULD after all stand up for pics.  Vain thing.]

As for MY head- those curls lol.  I tried to use my own hair but I just don’t have enough hair or enough skill, so I lugged out my steampunk wig box, and rummaged through various falls and hairpieces, finding some little bits I’d snipped off a very thick wig.  With some fiddling, I worked out that using plenty of hairspray to smooth it out, I could wrap a length round my index finger, fasten it off with two hairgrips, then blast another gallon of hairspray on and leave to set pretty solid.  With my hair sectioned, bunned, and arranged, I was then able to just grip the sausages onto the sides, and they stayed pretty secure all day.  Most thought it was my own hair lol.  In some photos though the fake hair bleached out a lot and looked rather like fake ears! 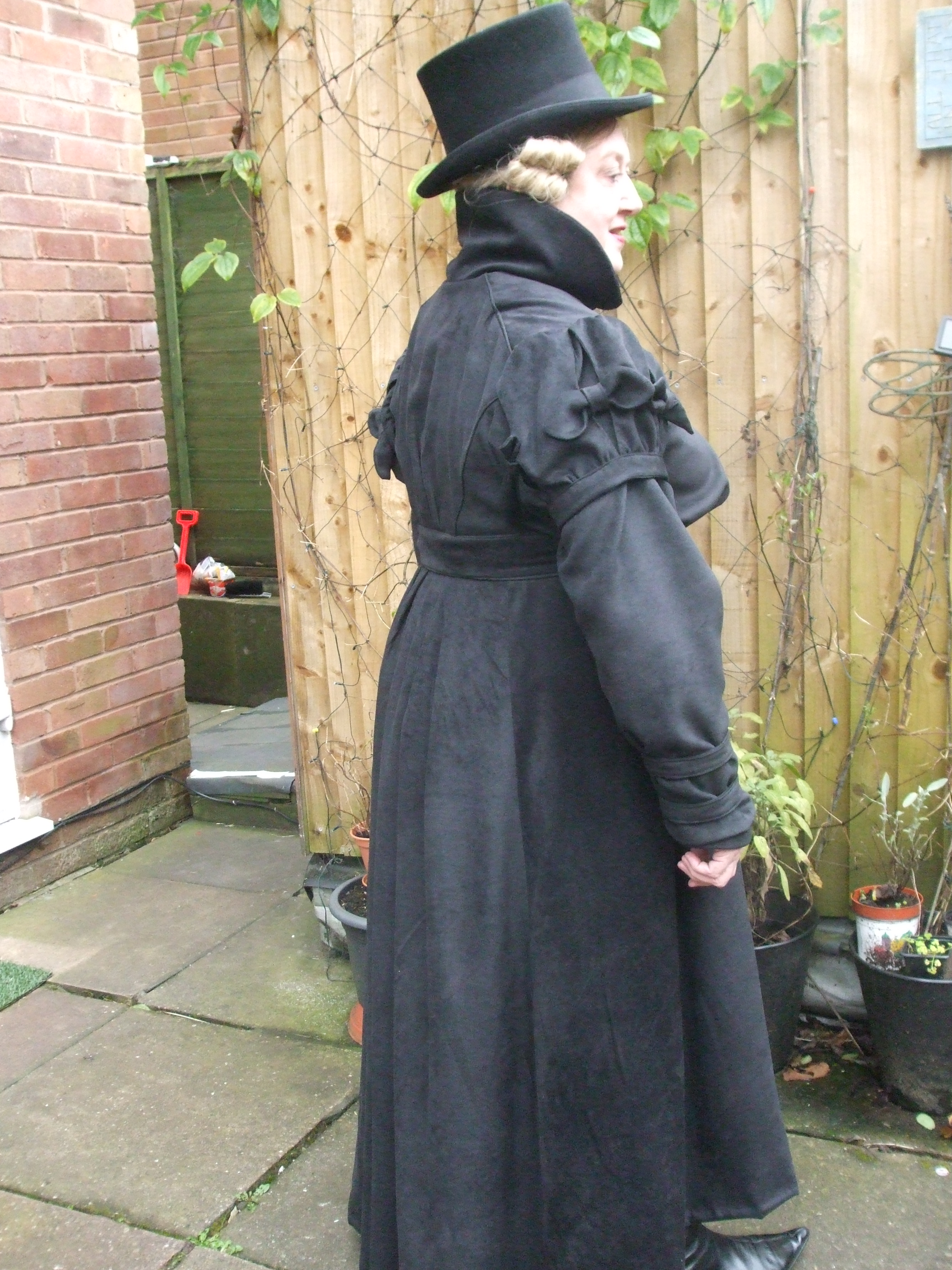 How did it go down at school?

The usual blank looks and silly guesses from younger kids [and of course, a few jeers and silly remarks from the truly unpleasant ones, not many though]:

A judge [at least that acknowledged the side curls]

Mary Poppins [apparently any white woman in a  long dress is Mary Poppins -could have gone for Nanny McPhee, but they didn’t lol]

A member of staff asked me if I was Princess Leia.  Right.

Another [himself wearing a deerstalker] asked if I was Sherlock Holmes.  I despair.

I had no expectation that anyone would ‘get it’ but it certainly had some impact, and I heard quite a few interested conversations among year 10 kids after I read them the ‘Gentleman Jack’ jacket blurb…

The older kids were genuinely interested, and as I’d brought the ‘Gentleman Jack’ BBC book in with me, I just handed them the book to read the back cover.  Lots of smiles, conversations about LGBTQ issues and compliments.  At least a few are going off to watch the series tonight too, yay!

26 thoughts on “Pelisse-d To Meet You”