The final item needs to be a ‘plain’ [read ‘daywear’] skirt, and it needs to be in pack 1, which is green-themed.  Time is short now, and I really have had enough of tricky projects, but I have the bug for trim.

I toyed with the idea of re-modelling the very first steampunk item I made, a black taffeta skirt, which is basically the same shape as the lovely silver one…but unlined, and made in a hurry.  I sort of like it, and have worn it several times, but it doesn’t hang properly, and droops or drags in all the wrong places. The fabric wasn’t what I ordered if you recall, and it never really gelled.  It needs re-modelling, and it will be, but somehow, re-making a previously made item felt like cheating.

The SWAP rules allow for one ready-to-wear garment, but I’m too mean to just go out and buy a suitable steampunk skirt, and after all the work that’s gone into everything else, that also felt like cheating [or at least, copping out!]

Inspiration eventually struck- in my Crate Of Shame lies a rather wonderful black linen skirt, originally from Per Una and rather expensive, which I used to wear A LOT.  It is made up of ten gores, each with a very fine pin tuck running down the middle, making it look like 20 gores.  It was worn so much, that the stitching had started to go in several seams, and in any case, my ever-increasing girth made it impossible to do up.  I removed the waistband ages ago, but then dropped it back into the C.O.S. because I HATE ALTERATIONS!

So, the plan is to cut off about an inch from the top of the skirt, making the waistband the right size again, remove the zip, and attach a wide elastic waistband, because I’m old and fat and want a comfy option so there.

I’ve rummaged in my crate of green oddments, and found two ‘sets’ of fabrics of an appropriate weight to make gathered ruffles/flounces for the skirt.  I’ve just pressed and re-folded them, and this is what I have:

I think any of these will work, and may actually end up making both bright and muted versions at some point, with or without the lace [I have miles of that, and again, it’s been in stash forever…]

So I did some measuring and calculating, and decided on roughly 6″ wide flounces, which [whatever the colour choice] will be made up of patchwork lengths, not single tiers in one colour/pattern.  This is partly a design choice, and partly because I will be governed by whichever fabric has the smallest pieces!

I was going to go with 3 times the finished length required, but have let myself be guided by a rather good little tutorial on adding flounces to ‘period’ skirts… 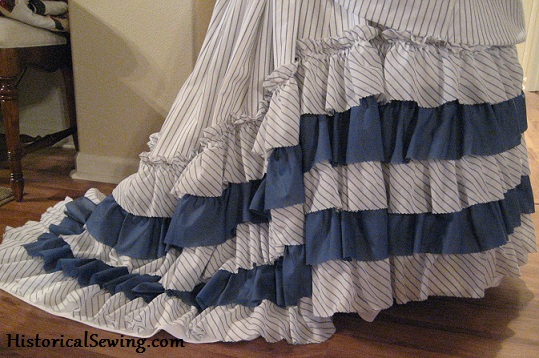 To my surprise, she says that it’s unusual to use more than 1.75 times the finished ruffle length.  This seems miserly, but I’ll go with it!  The maths is straightforward enough, and it looks as though I’ll need 12-15 yards of fabric strips.

While I wait for the wonderful Helen Howes to send me a ruffler foot, I might as well start cutting out the bits, joining them, and hemming…I’ll overlock the top edge [hey, this is not re-enactment, it’s steampunk!] except for whichever piece ends up as the top ruffle.

Should be cute, don’t you think?  And a LOT less work than some of the other pieces.

Oh yes, while rummaging in the green/brown crate [all my stash is sorted by colour] I found this lovely piece of stuff

2.5 yards of it to be exact.  A bit of narrow hemming and I’ll have a gorgeous scarf to wear round my pith helmet!

Opinions on the green fabrics are very welcome…go for it folks!